What Make a Mother?

Growing up, I used to wonder what really made a mother.  As an adopted child, I knew my mom was my mother... I mean, she didn't have to be and yet she wanted to be.  Clearly a mother.  But what about my birthmother, who (and no offense meant to her or to her reasons why, which are 100% valid) didn't want me?  Was she really a mother?  These weren't questions I talked about because, honestly, they were the philosophical rantings of a child trying to figure out where she belonged in the world, but they haunted me until I was able to put the pieces of my life together into the mosaic that they are.  (If your wondering, I ultimately decided yes to both the questions of whether or not my mom and the woman who birthed me were both "mothers").

And then, there was meeting Peter and getting married and the undeniable urge to become a mother myself.  And then... the miscarriage.

Was I a mother?  I'd carried a living baby for days, maybe a few weeks, before he died and my body just... forgot.  It didn't realize the baby had died and tried and tried to make the pregnancy stick.  By the time we found out and lost that baby, our hearts had been set on a baby coming home with us and instead were fragmented into dust.

Was I a mother?  I had no ultrasound pictures, no child I'd held... Nothing but the memory of the lines on the home pregnancy test and the hugs that Peter and I had shared... Nothing but the blanket I'd sewn and the memories I'd sworn we'd make once the baby was born that summer.

There weren't "Sorry you miscarried your baby, but have a good mother's day anyway" cards to give out in May.  There weren't folks I could really talk to.  People who knew us were sad, but we heard a lot of the "You're so young... Just try again and you'll have another one."  But, clearly, it wasn't that easy.  That miscarriage was in 2000.  Seven years later, and we were beginning to lose hope that my body would ever be able to do the simple task of getting pregnant.

Enter reproductive medicine and those lovely Gonal-F shots for ovulation induction and boom!  Nicholas and Sophia!  Life was great... my pregnancy was great...

And then it wasn't.  And they died.  And, although I'd held their sweet little bodies in my arms and kissed their delicate foreheads, they were gone, mere months after they'd come to be.  There were no diapers to change or bellies to fill.  No clothes to wash.  No stroller to push.

Mother's Day came and it was hard.  So very hard.  I mean, what meaning could there possibly have been?  I read the cards and held the sweet, very lovingly picked out gifts... But I didnt hold my babies.  I couldn't...  And that made the day more bitter than sweet.

Another beautiful baby boy... My sweet Alexander... With his peaceful pregnancy and the belief that things would be different...

Until they weren't.  And he died.  I'd labored him and loved on him and cuddled him.  I'd wrapped him in his blanket and kissed his fingers and toes.  But he never came home.  He never rode in the carseat or slept in the crib.  He never wore a onesie or suckled at my breast.

And then another pregnancy.  The one I swore was the last.  No more treatments.  No more risk.  No more...of anything.  A cerclage and my second Mother's Day and a lot of bedrest... And finally, a delivery of babies that had a fighting chance.  And then, they came home and there was laundry and cleaning and feeding and crying and all those things that I associated with motherhood. Clearly, finally, for the world to see: motherhood.  I carried the babies.  I fed the babies.  I walked the babies.  There we were, mother and children.

Fitting in has a lot to do with your headspace.  And, honestly, I don't know that I'll ever 'fit in' with the Hallmark holiday.  I get the whole 'making Moms special' thing- I do.  Motherhood is hard work and deserves to be glorified (every day, but that's another post...)

But what about bereaved motherhood?  What about all of the mothers who are mourning the children they can't mother on earth?  Where does that go? It's funny, especially, in light of the fact that the original Mother's Day was created to honor a mother who'd buried seven of her children.   CarlyMarie, a blogger and photographer, who has documented not only her journey as a mother to children in this world and the next (and has offered so much healing to other moms through her work) founded International Bereaved Mother's Day not just so we could find the roots of Mother's Day but so that all mothers- regardless of whether they hold their babies in their arms or their hearts alone- could have a moment to just be moms... to remember and be remembered.  Falling on the first Sunday in May, IBMD gives orphaned moms a chance to connect with others who understand and allows those of us who can to give words to the feelings and emotions associated with being a bereaved mother.  It's a way for us to remember our children who have passed away when we often may feel they are forgotten by the world around us.  It's a day of healing.  There may be tears, but there is understanding.  IBMD is also on Facebook, which is yet another way for parents to connect and get the support they need.

There are so many days that I feel trapped between the worlds.  It's happened more so since November, when my infertility was turned sideways by a surprise pregnancy and my IC and loss has done a 180 thanks to the TAC.  Do I still have IC or am I fixed?  Am I infertile or does this make me fertile?  Do I really belong with IBMD or should I just pay attention to MD now?

Like my philosophical questionings as a child, the answers to these questions really make little difference in the grand scheme of things (although I've answered them for myself nonetheless).  I became a mother the day a soul graced my life, back 13 years ago and, although I never held that sweet, precious baby in my arms, his life and death changed the course of my history.  Eventually, it brought me to the place where I would have the gifts of Nicholas and Sophia.  They, along with the two babies we miscarried along the way of our fertility treatments, and Alexander gave me a parenting gift for Bobby and Maya that, in any other way, I'd not have had.  There childhood is just as valid although it was cut short; and my mothering of them began the second they were conceived.  The love I carry will never fade and, as any mother can tell you, that is truly the measure by which we are judged.  Love.

You may not be able to see the number of children a woman has just by looking at her or by looking at her family portraits.  But talk to her about them and you'll see that love shining through.  That's what makes her who she is.  That is what makes her worth celebrating.  (And this isn't to see non-mothers aren't worth celebrating as well!  Some of the most wonderful and loving women I know are childless and have no desire to bear children.)

So, whether you've mothered a child who has never been in your arms or you've mothered one for mere moments... whether you have a child you are watching over in this world or one that waits for you in the next...  know that there is a place for you.  Know that you are special and wonderful.  You may not get breakfast in bed or flowers... There may be no illegible artwork on your fridge or no highchair at your table...  But you are still a mother.

Not today.  But not ever. 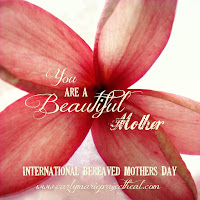