The kids are finishing their Super Why! episode while I work on compiling and reflecting over birth stories and Maya goes into the hallway (they love to play in the hall...).  I announce "Who wants breakfast?" and, as is her habit, she yells "I do!!" and comes running.  As she passes me into the kitchen, she hands me...her pants.  That's right; she took off her PJ bottoms.  And did she want them back?  Of course not...  So, I've come up with a few things she may have wanted to say to me: 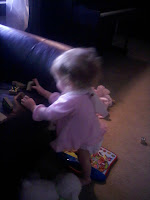 It snowed.  I'm actually in shock.  It was a light dusting, so no big deal, but we are sitting up April's skirt and it freaking snowed!  I was just out thinking about what to plant in my garden.  Come on, Cailleach!  Go away!  We are done with you!

Maya's godmother just sent a bag full of adorable clothes for my peanut!  (Her daughter is 11w older than B&M).  M's quite the shopper and puts me to shame with the ADORABLE outfits she picks out for L; it's great being the recipient of handmedowns.  (and, 9 times out of 10, if someone says Maya's wearing something cute, it was not my doing... sad but true).

Bobby is a musical genius... I know, I'm biased, but... He loves to play the piano and sing.  And I dont mean bang.  He actually contemplates the keys and picks things that sound, well, appropriate!  The other day, I thought Peter was playing the keys; nope, it was Bobby!  And, during some one-on-one time yesterday, he would echo the keys I was playing.  I would hit, for example, an A and he would look at my hand placement and find an A in another octave and play it.  So, I did it again, different key.  Same response.  Four times he did this before he pushed me out of the way so he could play around and sing.  I'll have to get it on video.  He's a heart melter...  But, he's not playing right now... Right now, he's climbing the loveseat and banging on the window! 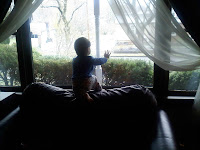 I think I may take the kids to the library today.  They arent really up for schooling this morning, and I think they are going stir crazy since we'd been doing walks outside and now it's nasty again.  The alphabet blocks are everywhere except where we are and (gasp) the kids are walking on their board books.  I'll try for a language video to see if that puts them in a better learning space.  But, I have a feeling that lunch time is going to be a slow journey... They shot down the two books I've tried to read, although they were more than happy to get dressed.  Maybe they can help me strip their beds?  Oh, wait, they have clean sheets already...

Tonight is the March Face 2 Face gathering!  If you haven't RSVPed already, what's wrong with you!!!  You don't want me eating Thai food by my lonesome, do you???

In related "really???" news, my nieces are a year old today!  Happy Birthday, Sophia & Grace!  (remember this post and this one?)  They girls are happy, healthy one year olds... It's wonderful, but I cannot believe they are a year old already! :)
Posted by Michele at 9:17 AM

They're talking snow here too. I can't believe it!!!

I always love reading your updates, even when my hands are tied up, preventing me from commenting!!!

the library is a great idea! i may borrow it today myself :)

thank you for my birthday wishes!!