Many in the ALI community know Barb.  Like so many of us, she has endured the loss of children.  Her son, George, was born still in 2008; later, she lost her sweet Little Poppet at 8 weeks when a scan showed no heartbeat.  Sadly, she's also among the land of infertiles (as I put my infertile hat on) and hasn't been able to conceive again.  She's a trooper, a strong mama, a brave woman... and she's one of the most talented people this world has seen.  I have proof.

Barbara has turned her sorrow into art and has some lovely pieces at her Corinadr shop.  Recently, she'd put a piece she was working on up on her blog and I mentioned to Peter that I'd love to have one of her masterpieces.  So, we decided to email and ask if she'd be interested in a commissioned piece.  Because Barb is one of the nicest bloggers you'll ever correspond with, she got back to me right away and the ball started rolling.

I told her what I was hoping to have: a necklace pendant that symbolized all the life I've had the privileged of carrying, even if for but a day.  I wanted something for the 4 little ones that I never had a chance a hold, something different but similar for Nicholas, Sophia, and Alexander, and then something like theirs but slightly different for Bobby and Maya.  My mother's ring records the lives of the children I've birthed, but it has weighed on me that I dont have anything that remembers them all.  It's not something I'd wear all the time, but I wanted something that I could wear special... That would hold them all... in my heart.

She's an artist and, almost instantly it seemed, sent me a sketch of what she was thinking.  It would be a fairly large pendent, but she could do it... It would be a challenge... harder than things she'd done... But she was willing to give it ago.

I never had any doubts.  I knew it would be perfect.  And when she emailed to tell me that it was being shipped from England to my door in the U.S.A., I was on pins and needles waiting... Two weeks later, it finally was here, through Customs, and in my hand.  Does it make me sound like I'm 3 instead of 30 if I tell you that I ripped into it?  Then, I must be 3.  I could barely get the babies out of my arms and playing before I opened the little package.

When I saw how gently it had been wrapped in tissue paper, blues and pinks...  When I saw the tags... The "made with love"... When I pulled it out and it was revealed.  It took my breath away.  I knew that I had to tell her I had received it, but no words would come.  I managed a quick "it's here" and explained that I was speechless...  After a short exchange, she realized it was because I was so overcome with emotion.  She had brought to life something that before I had no thought could possibly be.  She gave me something so special that nothing else tangible can come close to. 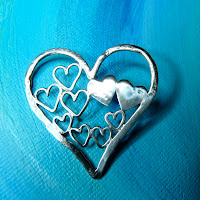 The outer heart represents my heart, my mother's heart, that holds all of my children deeply within.  The four small hearts at the bottom are for those sweet little hearts that never had a chance to beat outside of my womb: Peter, Dimitri, Zoe, and Grace.  The three larger, open hearts are for Nicholas, Sophia, and Alexander, who live on forever even though their lives on the outside ended so soon after they were born.  And, their counter hearts, the 2 filled hearts, are for Bobby and Maya, who continue to amaze me every second of every day.

I wore it today and I can only express that it was a deeply moving experience, being able to have a piece that was so unique and so full of love.

For a close up and to get an idea of the size...

Visit Barbara's blog to read her story or her store to find a piece that speaks to your soul
Posted by Michele at 8:46 PM

The pendant is beautiful and I'm happy that you have something so unique to show your love for all of your babies...

Its just beautiful! I love it!

What a beautiful piece, really something classic and meaningful. I sure it will become an heirloom for ages!

This is stunning. What a gift Barb is to all of us. I have one of her treasured pieces as well, but this is magic.
xo

I love it, so beautiful. Love your hair too!

That's beautiful! And you look fabulous!

Your pendant is beautiful!

Barb is amazing. I wear the pendant she made for me almost everyday.

That is such a lovely piece, and so full of meaning! 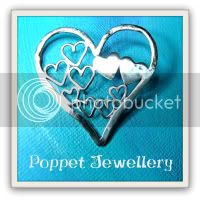