It seems insane to be starting off the baby countdown, but here we are... 3 weeks and 6 days... 4 weeks tomorrow... The counting drives Peter crazy since, technically, conception was only 2 weeks ago. This whole "last menstrual period" counting gets his goat. But oh well. At least I can feel like I'm 2 weeks ahead of the game! (well, not really...)

So, last night, when I got home, I peed on yet another stick. It's like an addiction. I just couldn't help it. And this is what I saw: Even darker than the other two! Yay!

This morning, I decided I was really going to do the digital. Especially since I hadn't gone to the bathroom all night! And, lo and behold, it said: 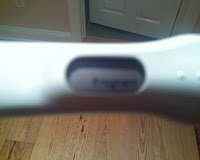 YAY!!! I can't tell you how many times I've wanted to read those words and nothing. It was so nice to finally have it.

I drove to Dr. Lee's this morning for my bloodtest and I took the clear blue easy digital with me. I just had to show Nurse Amy. She was overjoyed, too, and we were both so giddy that it took 3 pokes! The first poke hit the vein but it collapsed. The second was too high, but the third was just right.

Having the +HPT has really made a huge difference in the stress level I've had today as I've waited for the numbers. I've thought of our babies a lot, and have had some breakdowns as I remember their days. Alex and his 40... Nick and Sophie and their 64. Those hCG numbers were so wonderful to hear. What would she call and say? 40? 50? 60? 70? I was okay until about an hour ago when I started staring at my cell phone, begging it to ring.

Well, about 5 minutes ago, it rang. And Amy was on the either end. "Are you ready for your numbers?" she asked. "Congratulations, the tests were true!" And then she dropped the bomb. Now, before I share the numbers, let me just pause. As I said, Nicholas and Sophia were 64 and Alexander was 40. Their progesterones were good, usually in the 20-40 range throughout the first trimester.

I think I'm in shock. I really didn't expect that high of an hCG. Did the third follicle rupture and fertilize, too? Or are there just two really deeply impanted? (Or one really, really deeply implanted?) We wont know until an ultrasound, which would normally be scheduled Easter Week. Since we will be seeing family and talking to family on Easter, I'm going to ask her if we can do one on the morning of Good Friday. I realize the heartbeats may not be visible and that I will have to go back, but at least we would be able to share our news with family and tell them how many little ones to expect.

I had to pick myself up off the floor. I am sitting here in utter shock and amazement. No wonder the pregnancy tests picked up so early? I'm practically an hCG factory right now!

For all my fear, I am on top of the moon. But it's a crescent moon and it's stabbing my heart. With the joy of expectation comes the sorrow of missing. It's a two edged sword. But I'm preaching to the choir.

Thank you for your prayers and your continued prayers. They mean so much. Even Nurse Amy said those special words, "I am really praying for you guys." Often times, we think those words are hollow, but they really mean so much to Peter and I. Thank you.

Speaking of the mister, he didn't answer his cell phone or his office phone, so I am dying in my seat to tell him!
Posted by Michele at 1:24 PM

CONGRATSSSSS! I am so excited for you Michele, my thoughts and prayers are with you!

WOW! That is all I can say!

Congrats! Being one of those never seen a positive pregnancy test people its really cool to see it through your eyes! Great number!! BIG HUGS!

Michele - That is such wonderful news!!!! I'm so happy for you!

I am so very happy for you and will keep your family in my prayers.

Wow! That is really wonderful news! I'm so happy and will continue to keep you all in my prayers and thoughts. Love you! I'll call you this weekend, I know I owe you a call! Kisses!
Sarah

By the way...That second test is really cool! Does it actually spell out the words pregnant? I've never seen a test like that before. I'm just smiling and smiling over here for you!!

Holy s**t! I don't anything about numbers, so thank you for the reference. Wow.
I know you must be feeling mostly elated, with a huge roller coaster of other emotions. Just know that I'm here, praying. Revel in the moments of elation.
Peace.
P.S. My verification word is 'rests.' So, go get some rest.

Michele..it's 2:30 am saturday morning and I'm wide awake.I fell asleep at 7:30 last night after being awake for 48 hrs straight with my daughter sitting thru labor with her.I woke up to the thought of you and your big test yesterday.I had to turn on my computer and check your log(couldn't go back to sleep until I did).Yesterday at 12:20 pm my first grandchild..Gianna Elizabeth came into the world. March 27th,my life was changed forever,so was yours.Looks like god was shining down in Pa. yesterday.I am so happy for you:)

Your confidence in the last several days had me thinking this was so, (I completely believe that we can know before the tests catch up with us) This is great news.

THis is great news Michelle - It is undeniably two lines. Congratulations.