What an awesome journey this was! 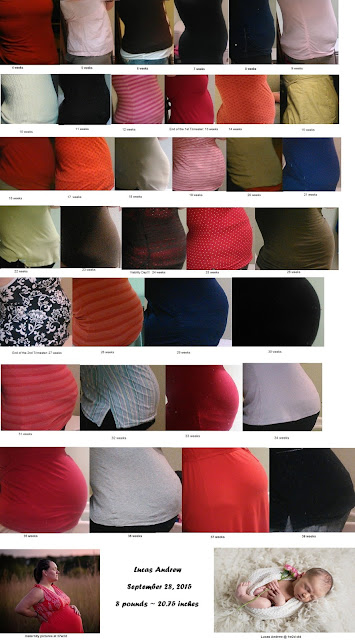 It seems only fitting that I post this on my EDD!

So, we had our last OB appointment on September 28th at 38 weeks.
The appointment showed a happy baby and, during our chat, I mentioned that I'd been having a lot of pressure.  Concerned that my cervix was being stressed, Dr. B. did an internal (funny enough, this is the first internal I've had for any of my pregnancies) and said that cervix was definitely fine.  To verify, he did a TVU and my cervix was, indeed, measuring over 4.  But, to be safe, he asked us to go over to L&D for an hour or two on the monitor, to rule out any contractions.  With each pregnancy, my uterus has thinned more and more around my incision scars; moreso that the cervix at this point, Dr. B. is concerned for my uterine durability.  Contractions would be a delivery; no contractions would mean going home and coming back for our scheduled c/s, unless I started contracting beforehand.

We were hooked up to the monitor and met with the resident and nurses, all of whom were lovely.  After an hour, the resident came back in.  "So..." she said.

And that was how we learned that Lucas would be our third September birthday.  As with Michael, I was silently and painlessly contracting; according to the monitor, my contractions were regular every three minutes.  Peter had realized this before the nurse came in when he asked me what the lines on the paper meant.  I was texting on my phone and just carelessly mentioned that the lines signaled contractions.  Sure enough, I was having them, but in the hour we were monitored, I'd only felt 3.   Since we weren't having a tubal done after the cesarean, Dr. B's big concern was preserving my uterus and not stressing it against contractions.  He came by and saw me later in the morning to confirm that we'd be put on the schedule for 3pm (since they needed to wait six plus hours post my coffee with milk and breakfast).  The anesthesiologist came in with her paperwork, the nurse went over admittance papers, and we were left to just hang out for a few hours.

By this point, it was lunch time and Peter left for a bit to eat and check in with his parents, where the twins and Michael were visiting.  I called my mom and texted family and friends to let them know that Lucas would be making his appearance in the afternoon.

At around 3, an IV was started and I walked myself to the OR, where I got a spinal/epi combination and prepared for surgery.  Dr. B. came in and Peter was summoned from down the hall.  In a matter of minutes, the cesarean was underway and, at 3:45pm on Monday, September 28th, Lucas Andrew came into the world with a loud cry.  He weighed 8 pounds even and measured 20.75".  His APGAR was 9 and minutes later, he was nuzzling against my face.

In contrast to Michael's birth, Lucas and Peter stayed in the OR until nearly the end of my surgery.  They then went to the nursery for Lucas's assessment but were then taken to my recovery room.  (Previously, moms went to recovery until the anesthesia wore off, then were transported to postpartum to meet up with baby.)  The surgery went well, with one minor issue.  Apparently my old uterus was tired and didn't feel like contracting.  While waiting on the double dose of Cervidil to work, Dr. B. had to manually contract it.  I'm told the floor looked like a murder took place, but altogether, I only lost about 2 pints of blood.  Once I was in my room, they also hooked up a Pitocin bag to continue helping my uterus contract.  A side effect of all of this is that I've had no bleeding... None.  If you've had a baby, you know how weird that is!

Once in recovery, Peter and Lucas were there, and Lucas and I began our breastfeeding journey immediately.  As I began to feel my legs, we were moved to postpartum.  My IV blew (thanks crappy veins!) and they had to start another one on the other arm, which, because of placement flagged the IV machine every time I tried to nurse (because I was bending my arm).  Hence, my third IV of the day!  Peter went home for dinner and to help put the kids to bed, but then came back for the night.

Tuesday, the twins and my mother-in-law visited and, that afternoon, I discussed discharge with Dr. B.  By this point, I was already up and out of bed, had showered alone, and was in my own clothes.  Since there seemed to be zero complications for either Lucas or I, he agreed that I could go home on Wednesday.  Lucas was seen by the on call pediatrician Wednesday morning and his papers were filed around breakfast time; Dr. B. visited me at 9am, and mine were completed.  By 11am, we were squared away and ready to go home, less than 48 hours after delivery.

As we've done after all the discharges, Peter and I had lunch at our favorite burger joint and then came home, where we've spent the last 2 weeks settling in to life with 4 little ones!  Peter stayed home and goes back to work today.  It will be neat to see how life unfolds, especially when it is just me and the kiddos.

But, without further ado, here is another shot of the newest love of my life!