I had a couple of comments to my post from yesterday and, while I'd thought of emailing folks, decided instead to make a post out of it.


I have no will power. None. I'm the girl who sneaks into the kitchen for that one tiny brownie that no one will notice... and who was planning on peeing on a stick (POAS) for the last few days. I even coerced Peter into going to the dollar store and buying 14 of them (yes, 14 pregnancy tests lined my bathroom cabinet... sad, I know.) When I told my girlfriend, Meg, about this, she made me promise that I wouldn't test until at least 8dpo because, as we all know, hCG isn't excreted until the baby/babies implant around 6dpo-8dpo. So I promised. And I didn't test until 8dpo.

And it was negative. Because it's always negative. I have been unable to get a positive home pregnancy test (HPT). I tested at 16w pregnant with Nick and Sophie- BFN. 14w with Alexander- BFN. I even joked with Dr. Lee that I must not excrete any hCG in my urine and be in that small minority of women who can't BFP no matter how far along in pregnancy they are. (She in turn offered to spin some blood so that I could at least be able to look at 2 lines on a HPT- sweet woman).

But, because I need something to do, I tested on 10dpo, too, and got another BFN. Peter kept reassuring me that we knew this would happen and to stop worrying. That the blood test tomorrow would come back positive and that, really, is more important than POAS. But as any woman who has POAS knows, there is a certain excitement that comes with seeing those 2 lines. And I wanted that. Just once. So, it isn't that I have will power. It's that my heart can only take seeing BFN for so long...

Last night, I really didnt feel great. Not sick, just tired. I kept dozing off in my afternoon meeting and by the time I made it home, all I could do was climb on the couch and curl up under my Mamaw's blanket (Mamaw is my maternal grandma for those who are wondering what or who a mamaw is!). I was asleep when Peter got home and woke up only to eat a vegetarian corndog around 5:30. I was asleep by 6:30, with orders for Peter to wake me up for choir practice at 7:20 (it takes 10 minutes to get to church). I didn't get up until 12:30 this morning, when I stumbled upstairs to bed. Normally, I have to get up and go to the bathroom around 3am (something about the 6 hour mark), but I actually slept through the night until the alarm went off at 6am. I decided, what the heck, POAS. Especially since yesterday's comments made me think of writing a post about POAS.

So I took one of my dollar tree PG tests out and did my duty. And there were two lines. O my goodness! TWO LINES! Now, given, the test line is light. In fact, my cell phone hasn't done a great job, but here is the test. 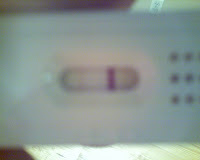 I know the test line is light, but it is THERE! I was so surprised, I couldnt even get any words out. I took the test into the bedroom, flipped the light on, and jumped on Peter, blinded by the light, and shoved the test in his hand. He had to tell me to call down and get out of the light, but he saw the line, too. And was over the moon.

Convinced this must be a mistake because, let's face it, I can't seem to get BFPs on HPTs, I decided to do another (since I hadn't tossed the little cup because even I can't pee on demand like that). I paced the bathroom for the three minutes before grabbing it up. And this is what I saw: 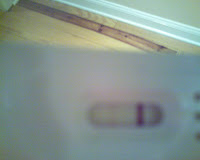 I don't even know what to say. I am still in shock. Can this be real? I know that it could be a fluke and that I need to wait for tomorrow's test. I also know, sadly, from experience, that it could be a pregnancy that doesn't survive next week's battery of blood tests. But, I am praying so hard and hoping with all that I have that this little one (or little ones) stick in that thick lining Dr. Lee was raving about.

Thank you for your support and your prayers. I know that they played a roll in this cycle. And I hope that I can provide you with good news over the next few weeks. Heaven knows how much we could all use that.

Oh Michele I see the lines too! I can't wait till you get to the doctor to confirm it...my thoughts and prayers are with you always!

YAY! That is so awesome!

What wonderful news!!! Those are some nice lines you have there. :) Can't wait to hear about your beta tomorrow. I am so happy/scared/excited/scared for you!

I am keeping my fingers SO tightly crossed for you.

Congrats! Hoping for an awesome beta!

Yipppeeee yahooey!! That is awesome! I am glad you went out and got those pee sticks!! Congratulations and I'll keep praying for you guys!

I can see the lines and I am SO happy for you!!! Keeping you in my prayers!!!! xxxx

Those dollar store tests would give me lots of evaporation lines when I wasn't pregnant, but only real lines when pregnant. Congratulations! Lots and lots of positive thoughts coming your way and many hugs.

I absolutely see two lines!!!! Congratulations. That faint line will continue to darken in the days to come. Your baby or babies will continue to grow day by day. You are in my prayers!
Peace.

Congrats! I am thinking of you today and looking forward to hearing your beta #. Hugs!