In September 2012, Bobby and Maya began PreK3 at our local Catholic school.  By October, Bobby was being evaluated by the school district for speech and OT services to help him adapt and, finally, in late November we were assigned a therapist.  Elizabeth joined Bobby in December and has been with us ever since... until today.  Today was the day Bobby was officially "discharged" from speech due to his age.  If we could keep her forever, we would!  He loves her and she has been amazing with him.

It wasn't always that way, though.  In the beginning, Peter and I weren't convinced that they were a good match.  Elizabeth is an Irish-native and, with her soft brogue, she seemed a bit too light to have much of an impact on him.  He fought back against her methods and seemed, honestly, unhappy with her!  But rather than give up, she changed.  She learned some ASL so that she could nudge her foot into the door he was closing.  She met him where she was and, in a matter of weeks, our little guy was starting to talk.  He was starting to answer yes and no questions.  He was communicating verbally as well as via sign.

In theory, Bobby would have "aged out" last summer; had he gone to public school, he would have lost his IU service and would have picked up speech as part of his school day.  While we were unimpressed with the school district as a whole, as it relates to our family, one of our discussion points as we made the choice to really delve into homeschooling full force revolved around speech.  If we opted to keep him out of PS, then he would, due to his late birthday, qualify for another year of speech with Elizabeth.  It wasn't the defining factor, but it made it easier.  Even that being said, we knew this day would come.

In August, we gave Elizabeth her parting gift (because Bobby couldn't wait any longer, LOL!)  Peter's mom made a beautiful reading throw out of three, gorgeous shades of green.  On the back, Bobby selected a square and she embroidered "Love, Bobby" on it. He was so excited to give E her present, and she loved it.  She told us later that it was a favorite amongst her children, who fight over who get to snuggle under it.  (We have a claddagh afgan that Ps mom made us, and I have to agree.... her blankets are AWESOME.)

Well, today, Elizabeth gave Bobby a special gift as she prepared to leave.  She made him a little flip book to remember her by.  I can't even look at it without wanting to cry. 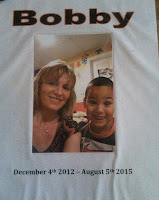 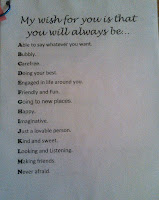 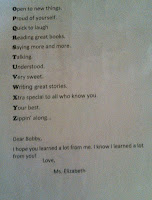 It's the end of this part of the journey.  Hugging her goodbye, I had to hold back tears.  I remember where Bobby was when Elizabeth started with him and now, as he makes some conversation with us or he comes up to me and asks me a perfectly worded question, I am reminded of how hard she has worked with him these 30 months.  While our time with the IU has been more of a headache than anything else, our time with Elizabeth has been time very well spent.

Hopefully, one day, we will meet again.  But until then, I hope that the road rises to meet her.
Posted by Michele at 11:05 AM