This morning, while we snuggled on the couch, Michael told me that he wants to wear underwear and use the potty.  I'm not sure if this is his way of telling me he is physically ready to try or if it is because the poor child is desperate to be like his big brother and sister.  I thought we'd work on it after vacation, as he approached his third birthday- NOT when he was shy of 26 months old!  Maya only took days to train (both day and night).  Bobby took years to mostly day train (we still have issues) and we haven't tackled night time, although we are definitely getting close to it, as he wakes up to go to the bathroom now at night.  Our pediatrician's recommendation is work on it until boys are around 8 years (day) to 10 years (night) before becoming concerned about an issue and, with Bobby's neurological issues, we are actually ahead of many families I know, so I'm not worried.  But having a 2 year old boy ready?  That terrifies me!

He's sat down twice; once he peed in the toilet and once he had just lightly wet his pants (maybe dripped?)  But it's not even 9am.  It's a long day for day 1!  I figure we'll go with three accidents, then a diaper and start again tomorrow.  I'm not really big on the whole potty training thing, so I don't know.  Physiologically, I have a hard time believing a 2 year old is ready (although I know plenty of trained 2 year olds!) so it's hard for me to feel like I'm fully committing.  But if he wants to try, then try we will!  Nothing says 8+months pregnant like running around after a kid trying to use the toilet! :)  On a good note, if he manages to train in the next month, I only will have Lucas in diapers!  Wow!

But, for now, I'm kind of mourning my baby who became who toddler who now wants desperately to be a little kid.  Where's my bambino!! 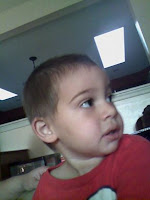