Well, I joked I'd be 33 weeks for my 33rd birthday and here we are.... 33 weeks today (which means 46 days until the C-section) and my birthday is tomorrow.  Woo Hoo!  My nieces were born at 33 weeks and are now healthy 3 year olds.  While I don't want to deliver now, it is nice to know the odds are on our favor.  One more week until the "we wont stop labor if your water breaks" stage and four more weeks until the technical designation of "full term".


I saw Dr. Bailey yesterday for my appointment.  I suppose, statistically, at some point, the appointments are all going to be great.  But, I'll confess, I had a bit of a cry after this one.

First things first, Michael looks great.  The little guy is huge.  My next appointment, he said he's going to try and get a good look at his length and weight but the little guy is a little monster in there... Definitely the Bobby out of Bobby and Maya! :)  He said it's not surprising that I feel him all over the place and that he's causing some discomfort when he nestles against my diaphragm or beneath my ribs (or on top of my now oversized ovaries!).  He's breech, which isn't a big deal because of the scheduled C-section, and, because my uterus is still measuring small, he's apparently running out of room.  It's funny to think that 4 pounds will be considered "big baby" because my uterus doesn't want to play ball and stretch!  I'm very curious to see the estimated weight and length of this little guy!

The not so great news...

First, my blood pressure (which has been stellar this entire pregnancy, like 120 over 70 awesome) was high.  Thankfully, my diastolic pressure was still good at 72; my systolic pressure was not so good at 142.  It could be a fluke... So, I'm to home monitor and, if I don't see any additional high systolics, no worry until my next appointment.  If the diastolic rises along with the systolic, then it's time to go to the hospital.

Second, my urine showed a small amount of sugar (50), which he said was most likely due to me drinking a sweetened coffee drink. (I swear, I wasn't going to have one and then thought, what the hell... No more sweetened coffee for me!)  As long as it doesn't repeat, it's fine, especially since my sugars have been good this pregnancy.  I also had a high-carb (deep dish pizza) for lunch, so that could have played into it as well.  Overall, this wasnt a huge concern (and thank God it wasn't a finding of protein in the urine because that would have warranted me a trip to L&D!) but if it continues, then we'll opt for safety and I'll start limiting carbs and sugars.

Third, my cervix shrank... No funneling (thank you God!) either above or below, but the below measurement went from a nice 4-5+ down to 2mm.  With a typical women, pregnant for a multiple time, he said he wouldn't be that concerned to see a 33 week cervix at 2mm.  However, because nothing about me is normal, he said this isn't exactly what he'd hoped to see (3mm would have been reassuring).  Yes, the cervix should change as pregnancy progresses but, since my cervix shouldn't open due to the TAC, that poses the risk of tearing the TAC, etc.  So, not thrilled.  Because of that, no more sex.  This measurement was via transabdominal ultrasound (TAU) and my next appointment will be transvaginal ultrasound (TVA) because he said that, now, every little bit will help us gage where we are in the end game.  While he thinks we'll make it to July without me getting to 0mm below the TAC, he also doesn't want to take chances.

Fourth, as if my cervix wasn't enough to make the appointment less than outstanding, the lower uterine segment, through which the TAC is placed, only measured 5mm.  That's 5mm of muscular tissue with the mercaline stitch running through it, that stops Michael from being a preemie at this point.  He couldn't get a clear view of the stitch, which could be good or bad, so he wants a better look.

And, Lastly, Contractions.... As of yet, they've all been BHCs, but he said the second that a BHC progresses and travels from the top of my uterus down towards my vagina, my butt better be in route to the hospital (it's 45minutes away) and he'd better be my first call.  At this point, he's concerned with my uterus rupturing due to the 5mm of LUS and the possibility that contractions would cause something to give.  (Since I cant really dilate the only other option is the point of least resistance: the uterine area where my previous c/s and my TAC surgery were done).

Which brings us to: an appointment in 2 weeks and then weekly until delivery.  I was a bit surprised by this.  He's still hopeful we'll make it another six and a half weeks to the scheduled c/s.  He said that seeing me and just checking more often will make that closer of a reality, since, at this point, I'm on no restrictions except "pelvic rest".  It's possible, because my cervix is dynamic, that it will lengthen, and that it wont play into any sort of issue, and he just wants to make sure that, regardless, we know about it before I just go into full blown labor.  Right now, he'd try to stop labor with tocolytics followed by hospital bedrest; once we hit 35 weeks, they'd try to stop labor long enough for the 2 doses of betamethasone and then the c/s would be 24h post my last dose.

The appointment wasn't all bad.  He thought it was hysterical that I did the 5K and said that he thinks one of the reasons this pregnancy has been so easy is that I've been active.  He was fine with the 14-15min/mile pace and said he's glad I'm slowing down.  I'm still okay to run up to the 5K distance, as long as I take walk breaks (which I do) and stay hydrated with both water and electrolyte drinks (which I do).  He'd prefer I not go alone (which I try not to) just in case of an emergency because someone would need to explain to EMTs if I couldn't why I couldn't just deliver in the back of an ambulance.  He did say that, once I have my next race in a week and a half, he'd like me to do more walking, less running, which I'm fine with.  The benefits of running and jogging this pregnancy have been phenomenal and, if I'm heading into 35 weeks and just starting to transition to running, I'm feeling pretty good about that.  He also said that, while he understands not teaching yoga after 34w due to liability issues, he's perfectly fine with me continuing my personal practice of yoga until delivery, as long as I have no issues.  So, that's good, since I think the yoga, even for 20-30 minutes a day, helps me sleep as much as I actually do.  Resting is good, but I'm still good to play with and pick up the kids/carry them.  He said that he's comfortable with me doing this until either I have contractions (see #5) or my next appointment in 2 weeks shows negative changes.  Also, we discussed staples versus sutures (sutures!), double verses single closure (double!), and 3 versus 7 layer stitching internally (he stitches 5 of the 7 layers and we discussed why the other 2 layers might impeded my personal recovery, so I'm happy with this.)  He also said he loves chatting with me because I'm informed and am more than happy to research and state my mind. :)  I love having a doctor who feels this way.  He joked that it's my defiant streak that makes me his favorite patient (meaning that I don't just take an answer for the answer but want to know why, etc, and want to talk about it).  He's a sweetheart.  I really love that man.  Oh, and I only have 3 (not 4!) more P17 shots to go!  AMEN!  My butt is so happy!

So, in that regard, the appointment was not a bust.  I shouldn't be upset. I realize that I'm lucky beyond belief in this pregnancy; grateful doesn't begin to describe it.  I do think we'll hit July with this pregnancy and the "full term" mark that July 4th brings with it (along with fireworks that the kiddos think are "AWESOME!!!" Me? not so much... too loud!).  That being said, I'd be lying if I said I'm just hoping the cervical measurement was a fluke (although I saw the screen... it's definitely shorter than it has been.)

But, Michael is doing well.  He's a good size.  If I have to deliver early, I know we'll have time for steroids and, at this point, they'd mature his lungs to full term status.  I know I just have to continue to put my faith in God, the TAC, and my care team, as well as in myself to be able to do this. 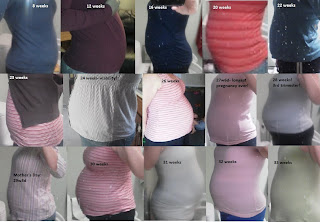 seriously amazing! i always dreamed of going full term and it never happened so i'll live through you :) so happy you are having an "easy" pregnancy and i hope you see that 37 weeks!!

Happy Birthday! So glad you have made it so far along in this pregnancy. Can't wait to meet Michael.