We held them together! Peter won the toss and held them first, then I got to hold them. He did Maya's care, then she was placed on one side of his chest. Then, the nurse took Bobby out and placed him on the other side of Peter's chest. The babies would open their eyes and look at each other, but the cutest was when they reached out for each other's hands. Just how sweet. Peter struggled a bit to hold them both comfortably in the beginning because he wanted his hands under the blankets that were around them. He held them for half an hour. 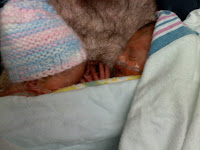 And then it was my turn. If holding them separately is a place in heaven, then I have no words for what holding them together can be. It was indescribable. Just to have them both in my arms... They were reunited after 13 days apart. It was beautiful to be a part of that (but we forgot to get a picture of all of us together!) 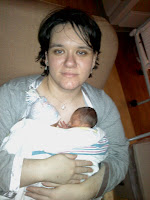 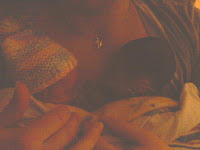 The nurse was nice; she's had them once before and I see her when I'm there frequently. Bobby was also on a canula when we got there. Peter asked her about both and she confirmed that she felt it was overkill, that she wouldnt have done it. Yes, she said, they have had fewer/shorter apnea/bradycardia spells but that what they were having before is normal for their age and they were fine without the canulas. They arent on any oxygen, there is just flow so that, when they forget to breathe, it gives them a nudge and says "hey, breathe!" It felt better to have a nurse agree and say that the babies dont need them, even if this isnt considered a "set back". You can tell they dont like them and Maya pulls at the tape at her face and will cry. She said that they usually keep them on for a week and then ween them back from the flow until it is 0 (they are at a pressure of 1). Peter wants them taken off now because he thinks it is pointless and would prefer that they were learning their responses, since they were doing so well without it. We both agreed that we would discuss it with one of our favorite nurses or nurse practitioners and see what would be best for the babies. Peter's primary concern is that the a.m. nurse from yesterday basically put them on the canulas because she didnt like that they went from CPAP to nothing. It has shortened the duration of the drifts, but hasnt taken them away, which is what the nurse had argued it would do. Bobby had more than yesterday and Maya, although she had more yesterday, had one with us there last night without hiccups, all while she was pulling on the canula. So, neither of us are really sure how this is helping. But, as I said, we will talk to them more. If it isnt helping or hurting, there is no reason to keep it. If it is helping, that is another story, and sometimes you have to have the babies uncomfortable so that they get better.
Bobby gave Daddy a very stinky diaper. VERY STINKY. It was kind of funny... By the time I was finished holding them, I was leaking all over the place. The front of my wrap had huge spots on it. Once Bobby was back in his isolette, Peter handled his care while I pumped.
I drove to and from the hospital. Peter wanted me to have my first driving with him since I will be going alone on Thursday morning. It was no problem at all. In fact, today has been the first day I've felt somewhat normal. Still sore, still in pain, but I've gotten around better as the day has worn on.
Well, it is time to pump before bed, so nighty night to me!
Posted by Michele at 11:50 PM

What beautiful photos! Thank you for sharing them with us. You look amazing too, Michele. And they're such big babies for their age. What a priceless moment you had today holding them together, I'm so happy for you.

Oh, these are such amazing milestones - and they look so peaceful and happy together.

Michele, those photos are absolutely beautiful. Definately priceless. I am so happy for you and your family. :)

Hey Michelle, are you supposed to be driving? Over here we have a rule that stops us driving until six weeks after a c-section. Is it different in the states?

Gorgeous pics. Your husband has such a hairy chest. Did it tickle their noses? Lol. :)

The photographs are lovely. For obvious reasons, I am so, so pleased to see Bobby and Maya back together again. And in their mom and dad's arms.

Hope you get the canula sorted. J used to pull her's out so much that in the end I wasn't sure if she was getting any help at all from it! It seemed to be out more often than it was in.

Yay Bobby for the stinky diaper. And yay on the driving for you. Glad that you are feeling a bit closer to normal again. xo

I am so happy for you that everything is going so well.How exciting to be able to hold them both at once.They are so precious and truly a gift from God! ((HUGS))

You look so content, holding them. I'm glad they're doing so well.

What a beautiful post and pictures. That is so awesome they think of the babies heart needs too and not just medical. I showed my new nurse the babies pictures and she saw Maya first and was all OOOOHHH Look at that beautiful hair. And She loves Bobbys dark eyes. She is 5 mos pregnant herself and has a 4 and 2 yr old also.

Good news. I have 2 houses to go look at and choose from. Pray the lord shows me the right one. And know my Prayers are with you all. xoxo, Kandi Ann

Dear Michele,
I was following your story on Baby Center and now check your blog daily for updates. I just want to say that picture of you holding your two babies brought tears to my eyes. I can only imagine what a special moment it was for you! I continue to keep you and your family in my prayers.

Bobby and Maya are so precious, all snuggled up and looking at each other.

So glad you were both able to hold Maya and Bobby together. And great news about the stinky diaper. :-D It means his little body is working. :-D

Thank you for the update and the pictures. All my love to Bobby and Maya. Take care. Glad you feeling better. God Bless.

What a special day!!

Wow, that picture made my day! Congrats on holding them together!

AWWWW!I love it that they were able to be together again- that is just awesome. Good luck with the cannula situation!

SOOOO cute! That is adorable that they reached for one another's hands. Awwwww...

Michele - we have waited quite a long time to see you with babies in your arms.

Your parenting days are full of many fond moments.

What a wonderful photo- you and both babies snuggled up on the outside! How great that your recovery is coming along as well!

Oh those pictures made me cry! What a beautiful moment! I'm so glad that you were able to hold them. Hopefully the situation with the canula gets resolved soon.