So much can change in a year.  By the end of 2007, I was pregnant.  By the end of 2008, I had bore and buried three children...  By the end of 2009, we had Bobby and Maya home...  And, at the end of 2010, I found myself struggling with myself.  I started a blog to chronicle my weight issues, which I started with a post entitled Battling My Bulge, in which I took that 'first step' to try and stop killing myself with obesity.  I came to terms with the fact that I was 251 pounds when the kids were born and, a year later, was still looking at 240 on the scale.  I came to terms with the fact that although I had PCOS and Hashimoto's, what I had more of what a lack of responsibility and self-control and a problem overeating and with emotional eating.  I wasnt sure exactly what to do about it, but I knew I had to do something.  I cried about it on this blog with What We Need to See, a post about being slapped in the face by my obesity and the heartbreak that I finally had come face to face with.

I'd tried dieting... I'd tried working out...  I just didnt have the balls (pardon the word) to keep with it.  But, something switched in me last September.  Something changed.  I changed.  I saw myself for what I was- and for all the things that I wanted to be, not just for me, but for my kids and my family.  And that, truly, for me was the time that I stopped lying to myself and started telling myself the brutal, honest truth when it came to my weight.  I was fat.  And I was responsible for that.  Not the Hashi's, not the PCOS... But the overeating- that was me.  All me.  I didnt need to take a pill to get healthy- I needed to take responsibility.

And I did.  And I continue to do so.  It's a daily battle and sometimes I lose it (and the bag of pretzel M&Ms wins).  But I'm still fighting it.  And I know I'll win the war.  In a lot of ways, I already have.

I didnt know where I'd be a year from last.  I didnt know if, once again, I'd find an excuse to use as a crutch or if I'd just give up because I didnt want to keep going.  There have been tears.  There's been eating when I wasnt hungry.  There's been reaching out to friends and Peter when I just needed another voice on the line.  But, in the span of a year, I've changed.

And not just on the outside, which is clearly visible (even to my blindness!) but on the inside.  I've become much more aware of myself (and my faults).  That's not to say I've made all the changes I could make!  But I am aware.  And I think that I accept advice a little easier (although Peter may disagree!)

So, today, I think I'm making a cake for me.  A life cake.  A year older, a year wiser, a year of really living- and being proud of the life I've lived.  I honestly could ask for anything more today that the knowledge that I've given myself an extra year of life by changing the past one. 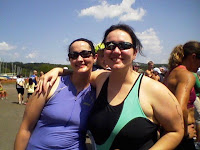 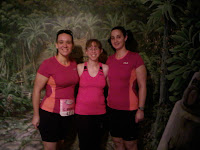 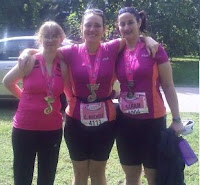 I am so impressed at how you have stuck to your commitment of being healthier, and have been willing to chronicle the good, bad, ugly, temptation, and so forth.

Being healthy IS a marathon, not a sprint (learned that gem in W.eight Wat.chers).

Three cheers for you!

You have done so amazing!