I thought it would be neat, as we head into the kids' 2nd birthday, if I tried to do something with them for the first time from September 1st until their birthday on the 10th.  I had the idea after doing a few firsts, so September 1st was the day of more than one!

Our first first was that the kids and I walked- no strollers, just our legs- to the schoolyard playground, 4 blocks away.  It's not the first time they've walked, mind you, but it was the first time that it was just me and them, sans a stroller.  We held hands and walked down the sidewalk.  It was a fun time.  So fun, in fact, that we did it twice in one day! (although, the second time, we were with friends, so that wasnt technically a first).

The big first of the day was... Juice Boxes! 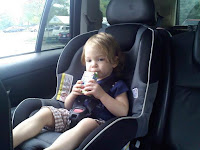 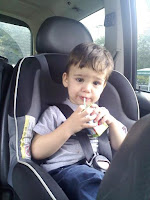 While at Whole Foods to pick up some things for dinner, I noticed they had the 8 pack of 4oz organic apple juice on sale.  We usually pick up a vegan gingersnap cookie at the end of our trip and the kids split it, so I decided to get the juice pack as a special drink.  As you can see, they had them in the car, and they were the hit.  Maya was hysterical.  When she was done, she calls out "Mama!" and when I turned, she shook the empty box and make a slurping (like, this drink is finished sound) noise.  It was pretty darn hysterical.

We'll see if I'm able to figure out something special for every day until their birthday!
Posted by Michele at 8:41 PM

How awesome is that! And absolutely a great idea to have a countdown to their birthday!

Have you considered turning your little one back to rear facing it looks like they would still fit! much safer :)