I dont know if it is that I decided to let go of my preconceived weight notions and decided to not just accept, but be happy with, the weight that my body decides is the "right" one this time around, or if it is that having that realization brought me back to the initial mindframe of when I first began this journey into rediscovering eating.  I dont know what it was.  But, what I do know, is that number on the scale this morning was something amazing (to me, at least!).

I think I mentioned that I was around 165 at my wedding, which was up a good 10 pounds or so since Peter had I had met and then exchanged the vows that changed our lives forever less than 2 years before that September soiree.  Peter was probably around 145-155 (and a little on the too-thin side for his 6'2 frame... Not that he wasn't eating, but his I'm-in-my-30s metabolism wouldn't kick in for another decade or so when he hit his thirties!).  These days, Peter weighs well for his frame (I'd put him 160-175 as a happy place, since although he's tall, he's got a slight build and he's usually within the 165-170 range when he steps on the scale), and we all know that my weight wasn't quite healthy this last decade (okay, it was downright unhealthy... let's be honest).  At his physical last week (with clothes, to be fair), to doctor wrote his weight as... wait for it... 169!!

So, sortofkindof, Peter and I weigh aroundsortofkindof the same.  This hasn't been true for, if I'm honest...ever.  By the time he put on weight to get to his happy body place, I had far surpassed him and then some... and then kept going.  Not that he cared; if there is one thing I can say, I truly dont think that my heaviness bothered him.  I think the fact that he was concerned about my health bothered him (alot) and that the fact that I loathed myself bothered him (even more), but the fact that he was thin and I was, well, fat... I dont think he ever gave a second thought to it.  Which makes me love him all the more.

But, back to the other... The same... (or at least close enough!)...  This was one of my milestones.  We'd agreed to 170 as the "Weighs the Same As Peter" milestone, which, in keeping with my gift to myself, should be a dinner date!  (Because, really, isnt it uber healthy to reward yourself with food??? I know... I know... Judge not!)  We're going out in a month for our date, but maybe we can fit in something before.  Maybe with the kids too.  I love going out as a family.  A date, just us, is really nice and special.  But, seeing the kids explore new foods and enjoy a new surrounding is... extra nice and special.  And I'll get Peter to myself on June 17th/18th.  I'd rather have this milestone date with Bobby & Maya in tow :)

But, again, I digress...  The same...  169.  It's pretty exciting for me to see a "16X" on the scale.  Right now, I am ten tiny pounds away from the N word: normal.  At 159, my BMI drops from the "overweight" category into the "normal" category.  Every pound from 169 down is a pound closer to being, BMI wise, normal.  That hasn't been the case in a VERY long time.  And, in addition, it's a step towards something new: Peter weighing more than me!  And, at 6'2, he should weigh more than his 5'7 wife, even taking into account his slight build and my "large frame"!

What makes this so...interesting... and, even fun, is that there was no dieting done.  There wasn't a book to follow or a way to fail or being on this diet or "no, I cant eat that" or "Sorry, no pie for me, I'm on a diet".  There was eating responsibily and a very large learning curve.  There was the healing of some emotional eating scars, and the acceptance of the ones that wont heal.  There was the knowledge that you dont "cure" this, but you sure as hell can fight the war and come out ahead.

When I started, I wanted to become a healthier role model and drop 90 pounds.  I wanted to stop having a near addictive dependency on food.  I wanted to stop eating when I wasn't hungry- heck, I wanted to know that I was hungry and be able to feel when I was full.  Now, I'm sitting in the kitchen, and other than my iced tea, there's no food around me.  I can look around and see a well stocked pantry and fridge, but I'm not hungry and, therefore, the temptation isnt there.  Within arms reach is the candy dish, stocked with chocolate and all sorts of goodies.  But, I'm not reaching... Because I'm not hungry.

Sometimes I am, and sometimes I have one (or two).  Sometimes, I feel that nawwing sense of inferiority/sadness/takeyourpickoftheemotion and the food calls to me and promises to help, and I waver and give in and take more than two (or 10).  It happens.  I know it will.  It doesnt help, though... the extra eating.  It might feel good for a moment (although, I've started seeing that it doesnt feel good... it might feel numb for a moment is probably a better phrase).

What does help?  Knowing that I can eat whatever I want.  Knowing that there's not a diet going on that I can fail on.  Knowing that I made mashed potatoes and collard greens and corn rolls and homemade BBQ ribs for dinner last night and that I had a helping of each plus a small salad and small fruit salad AND a piece of lemon cake that I made.  And it was great.  And there was no guilt or overeating.  There was simply "eating"; actually, there was "eating dinner with my family."  It's sitting down at the table with the kids during the day and having breakfast, lunch, and second lunch, and knowing that they are seeing a good example of a good relationship with food and that that is what they are mimicing.  It's having snacks with them throughout the day, and realizing that I dont need a bag of chips or a handful of candy; no one needs that.

It's not about depravation; it's about responsibility.  And learning that has made a huge difference in my life.

I wanted to change, and I have.  I still am.  I may look in the mirror and still see the woman I was a year ago, but I know I'm not her.  I had said once that it was in the eyes... That there was something about me that changed after my children died and that, if you looked closely, you'd see it in my eyes.  There's something else there too, now.  There's still the pain and the sorrow that wasn't there before 2007... But there's a hope that was born with Bobby and Maya, and there's an understanding that was born with me.  I thought it might take me 9 months or so to lose 90 pounds and that I could have some great little "9 months to grow a new person" post.  But, it seems like, with most things "new person" related, I'm premature and 7 months is the longest I have in me.

It wasn't about the weight.  I thought it was, but it wasn't.  That was just a deeper symptom of me and how dead a part of me was.  There will be a part of me- 3 parts of me- trapped in different parts of 2008 forever.  And that's okay; it's part of who I am.  There are parts of me trapped at other times too... And, I'm okay with that; it's part of the life story that I can accept about myself.  But I let something so base-eating- control some of the best parts of my life.  Rather than deal with my feelings or try to accept myself and love myself for who I was at the time, I tried to bury that woman away.  It's a shame. Even though I may be a "premature" person at only 7 months into this journey... Even though I may need life support at times in the way of friends and family to help me through hard days... Even though I may struggle with developmental delays as it relates to relating to food...  I'm a new person.  I know it.  And that, I can see.  It's in the eyes.  (and, in some ways, in the waistline, too). 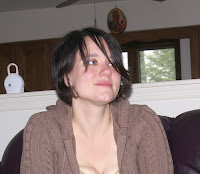 Delurking! First - the short hair is just awesome! Second, I have to go back seven months and start reading because I'm at the beginning of the journey and these posts are very inspiring. Thank you!

thanks guys! amazingk8, you might want to check out lessofmichele.blogspot.com, which has all my weight centered stuff

You are beautiful and glowing!

I'm happy for you. Sending love. Can't wait til we see you guys again.