Sometimes, it seems like time is eternal.  Othertimes, there just isn't enough of it. Guess which one I'm living with now.

All is good at the Haytko house... mostly.  Bobby has finally come down with the illness Maya had a bit back and is miserable.  No, make that MISERABLE.  He finally broke out last night, but his fever has been 102-103 since Holy Saturday (including several nights where he would only sleep if Peter were holding him, chest to chest) with no rash.  He's also severely congested, which is different than Maya (but, of course, Maya wasnt cutting a tooth at the same time and overly slobbery).  I can hear him now, trying to wake up and trying to go back to sleep.  Other than his little sounds, the house is quiet and I'm the only one awake.

Easter was beautiful.  The Mass was lovely, and then people came to our house for breakfast.  Later that day, we went to Peter's parents for dinner.  Really, such a nice time.  And, we do make a happy family :) 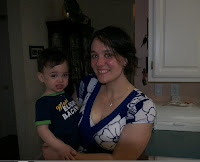 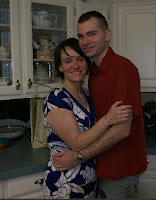 (I havent uploaded all the pics yet, hence no shots of Maya :( but I will!)

I've worn shorts.  Gasp... I know.  I bought a few pair of mediums (which listed their size as 8/10, even more gasp worthy) and I wore them, for the first time, yesterday.  Two pair actually... and two different t-shirts (also mediums) because Bobby threw up.  But that was okay; he felt SO much better afterwards that he could puke on me again if he wanted!  It was  strange, not being in pants or capris.  It's going to take a lot of getting used to; I found myself very uncomfortable and self-conscious.  The shorts were fine; it was my psyche!

Our garden is planted!  Well, mostly!  I have 4 large raised beds and 3 smaller ground beds.  One of the ground beds is done and 2 full and 3/4 of another of the raised beds are done.  I need more dirt for the remaining raised beds, and then I can finish... I'm hoping to do it today or tomorrow.  And, we had our first (of 3) fence contractors visit for an estimate last night.  We want to fence in part of the back yard, as well as the side yard (where the garden is) so that the kids will be able to safely be outside with one parent.

I havent topped my high running mileage yet (9m run, 10m on the outing with walking to warm up and cool down) but I'm planning on attempting 9.5 this weekend.  Possibly 10.  So, we'll see.  At the least, I'll have a repeat of the 9.

I hope the babies are feeling better soon!

What a gorgeous family!! I hope Bobby is better soon. I hate seeing little ones sick!!

That feeling of being very conscious about our clothes? I know it.

Am happy you had a fab Easter. And also hoping Bobby will recover soon.