Thanks for the warm thoughts for yesterday. We had a nice dinner at our favorite Italian restaurant.
I posted all the last week's pictures but wanted to add some of their Halloween shots here. Here they are in their Halloween onesies. (Bobby's says "Baby's 1st Halloween", Maya's says "I love my mummy") 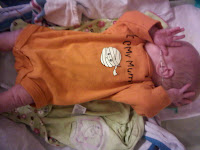 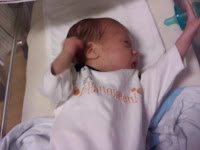 We dressed them in adorable outfits that we received at our shower. They are slightly big on them, but they were so cute (and since I wanted their onesies to show, they worked GREAT!) 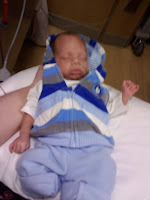 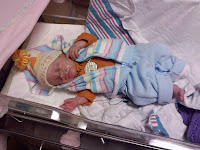 Bobby has now outgrown all of his preemie sleepers and most of his preemie onesies. Maya has outgrown some of her onesies and sleepers, but can fit in a few. Today, I'm bringing in "newborn" clothes for Bobby. I actually have a full bag of clothes to donate to the NICU (they need sleepers and hats for itty bitty babies like crazy!) I cant believe it... He is at 5lb 1.8oz and Maya is 4lb 13.4oz. Their feeding percentages dropped a bit but they are still doing well. Bobby choked twice last night and went into bradycardia. But he worked really well at helping bring himself back and I was able to tell that it was going to happen. He coughed and, even though he was sitting up, I moved him into a burping position and started patting and rubbing his back. He was gagging and trying to breathe and he actually kept his respiratory rate in a good range. His HB dropped into the 60s (better than the 40s and 50s the last time) and, although he was fairly limp, his color wasnt blue (although it was a slight ashen color). Not to be outdone, after tiring herself out with her bottle, Maya had an apnea spell for 21 seconds. She does this after she's finished eating and is resting on her tummy (which used to be how she LOVED to sleep after eating). I think we'll have to start putting her in a cradle hold after eating.
My breast milk production is increasing! The herbs and tea (and yes, Mom, the extra rest) are helping a lot. I also used the SNS again and, although the twins showed zero transfer, Maya was able to, for the first time, get my entire nipple in her mouth! She didnt know what to do with it, but she got it in! Bobby also managed this feat and he got in some good sucks that actually drew the milk through the SNS tubes! (Peter and I had to prime it the first 2 times for both because they just couldnt suck hard enough.) It's going to be a hard road, I think, but they are growing and learning and, hopefully, I'll be able to make it easier on them by having a better let down. I'm pumping like a fiend (yesterday was 15 times) and I'm hoping that as my milk increases, everything else will too. This morning, because the babies would be out of milk, Peter drove down before work to drop off milk. I am now barely keeping up because, as my milk increases, the doctors increase their feeds. The amounts are based on their weights, but it is hard when I feel like I am working so hard to make their amount, I do and feel great, and then, in the next second, get hit with the news that their amount is now higher than what it was (and higher than what I produced). I am trying to stomach the idea that they may soon get one bottle of formula a day at the hospital if I dont increase at a more rapid pace. It makes my stomach hurt to think about it. I told Peter last night that I may tell then nurses to make sure the formula is done in the wee morning hours when I am not there and to hide the bottles afterwards so I dont see them. I know that may sound dumb, but breastfeeding is the last thing I'm holding onto and, right now, I am not ready to let that go. Peter keeps telling me that the most important part was that they got milk in the most critical time of development and the nurses tell me that I am truly a moocow for a single baby and that they are surprised I kept up with twins for this long, but to me, this feels like another loss. I'm just not ready to take that yet, so I'll keep taking herbs, pumping like crazy, work with using the SNS, and trying to get more rest, with the hopes that they will continue to make the difference.
Hopefully this week I can catch up on all your blogs and news! I feel horrible about being incognito for a week. Rest assured I do care and I cant wait to read (and comment) on all your news! (Also, a shoutout to OHW: I think that I may have deleted your email. It went to my spam folder because of the subject line and I didnt notice the email until I'd already hit 'delete spam'. Would you resend it? I can hit the post office later this week.)
Posted by Michele at 8:26 AM

Love the onesies! So cute.

Michele, you babies look sooo cute!! Don't feel bad about being away...your babies should be your focus right now. We all understand. :)

Those are just adorable! I can't believe they're growing out of preemie stuff!

Ok those are the cutest two little Halloween babies ever!! Love the outfits! Thanks for sharing! =)

Sounds like your babies are doing excellently! YAY! They are sure getting to be chunky monkey's which is wonderful. :-D

They are adorable!! How exciting they are into newborn clothes!! You are doing wonderful with breastfeeding and pumping. I have the same attitude about formula as you do... I pray that you will produce even more to keep up with Bobby and Maya! Don't beat yourself up if they need a little formula. I don't know anyone who can strictly breastfeed twins! You are doing awesome!

Wow! They are doing awesome. I love the "I love my mummy" Onsies. They are growing so much.
I am glad your breast milk is picking up. Peter is right-you are doing the best thing and helping the babies at this important time. Your body will do what it can, while it can. If it gets to the point it can't keep up with what the babies need- don't beat yourself up (too much). From working NICU I have learned babies are pretty resiliant creations from God.
Keep up with the rest and don't stress about keeping up with us. Our blogs aren't going anywhere...um, well- mine did, but you know that. :)
{{HUGS}}

They look adorable and are growing up so quickly. I will continue to pray for more milk to come in. I know how you feel. I wish you didn't have to feel that way, you have given them so much and that is why they are doing is well.

Try not to beat yourself up to much. You have done so much and are already (and will always be) ana amzing "Moo"my (sorry - had to slip that in...) to both of yuor little ones!!!! Just look at haw amazingly well they are doing!!!

How adorable those little outfits are! I am sorry I didn't make it to comment yesterday, remembering Nicholas with you and praying that you and your husband feel both love and some sense of peace as you remember him, I know how hard that is.

They are just too cute for words!

Michele,
I am amazed at how much Maya and Bobby have grown! I don't know what their weight gain is, but they just *look* so much fuller and stronger.

I'm a NICU nurse and when your production is low, in order to help the babies digest, reather than feeding one feed with formula we mix the EMB with a little formula at each feed to stretch it out and make it last longer (like one third formula and two thirds EMB). This way they don't get completely switched to eating something different only once a day which might be upsetting to their tummies. Just a suggestion!