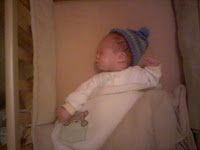 On Saturday at 6:30pm, Bobby entered his home for the first time! He was 8w2d old (37w gestationally) and 6lb10oz. He came home sleeping but didnt stay that way for long! We put him in the cradle we have downstairs and watched him sleep (and listened to him coo and make "preemie noises") for about an hour until he woke up and we did his diaper and fed him. 1am seemed to be his happy time. He was awake from 12:30am until 2:15am. Mind you, they sleep/eat for 20 hours a day. And he was awake for almost a 2 hour stretch! We ate, sang songs, danced, cuddled.... But no cigar. He wasnt going to sleep. Because the cosleeper wasnt set up, I stayed downstairs on the couch. Peter went back to the hospital for Maya's 2am and he's going back to visit her this morning. I'm taking Bobby for the afternoon and then I'll go back alone tonight.
***
In not-so-happy news, guess who has a case of mastitis... I mean, Universe: really??? You couldnt share your unlucky love with someone else??? Infertility, Miscarriage, Infant Loss, Preterm Birth... I couldnt just have Breastfeeding??? I mean, in the grand scheme of things, it is such a small thing to ask... I'm still pumping and I started breastfeeding-safe antibiotics, but at this point, instead of pumping 120ml at a pop, I'm lucky if I can get 45-50. They ran out of milk yesterday at the hospital and when we got there, Bobby had a bottle of (gasp) formula. I was devastated (and yes, I understand that he was hungry and it was nourishing, I get that, but this was my last holdout on "normalcy" and was something both Peter and I desperately wanted to do exclusively). We decided that until the mastitis clears up and my milk can flow again that we'll give the majority of the milk to Maya since she is still in the hospital. Which means Bobby drank quite a bit of formula yesterday and today.
And it stinks! Literally! I guess I never really noticed before but after having pumped for so long, I mistakenly thought that formula probably smelled like breast milk. (I know... dumb me on that one...) I'm so used to basking in the smell of breastfed baby that it really shocked me when Bobby burped and it was NOT what I was expecting. Hopefully, we will be able to return to breast milk only soon. The antibiotics end in 10 days and things should be back to normal (or so I hope).
Maya is taking her full bottles and then some! Peter says I cant refer to her as "Chunky Monkey" on the blog because he hates it (I think it is cute!) but suffice it to say she is living up to my name! Her minimum is 50 and she's been taking between 60 and 65! Making up for lost time! She sounds a lot better. Hopefully, this weekend will go by smoothly and Monday will not be a repeat of last week. Assuming she is good on Monday and Tuesday AND she is still taking her bottles, we are hoping to see her home next week!! YAY!! She was moved back into the Transitional Nursery yesterday afternoon, which feels like another good sign.
Well, I have to finish up pumping so that Peter can get on the way to the hospital.
Bobby's home!!!
Posted by Michele at 8:30 AM

Oh my! I've got happy tears running down my face! Congratulations to you all, and I can't wait to hear that Maya's home too! So happy for you all!

That is wonderful news! Congrats! This post made my heart happy!

Yeah I know what you mean about formula. It stinks! I remember having to use formula for the first time with Jordan when my milk supply wasn't keeping up with demand. Was devastating for me too. It's like the one thing I thought I could do. :(

Don't be too hard on yourself. You've done so well!

Congrats on Bobby coming home~ how exciting! Crossing my fingers that Maya is soon to follow!

My son, Cooper, was born at 31w1d on 11/1/09 so I have only been a preemie mom for 2 weeks now. I gasped when I came in last Monday to find Cooper receiving formula b/c I thought I had been doing so good on keeping up with pumping! Its upsetting b/c all these other people are taking care of my baby during the day and making sure he always has breastmilk is the one mommy thing that only I can do for him...I can't wait to Cooper comes home and hopefully we're only a few weeks away ourselves!

Yay! I'm so pleased that Bobby is home. I'm sure it will not be long before his sister joins him.

Formula is so smelly! Especially the preemie ones. I'm so sorry to hear about the mastitis, I hope it goes away soon. I cried when J had her first bottle of formula too, it felt as though the only thing I could do had been taken away from me. But just remember how amazingly you have done. You really have done your babies proud, to make enough milk for TWO is absolutely wonderful and you have given both of them such a good start. You really should be congratulating yourself! It is hard work keeping up with the moochine.

I am so excited Bobby is home!! Very excited for you Michele!! Welcome home little man!!

This is so great!

GO BOBBY! Yay Maya for chunking up (which is the GOAL at this point in her life so I personally think "Chunky Monkey" is cute and positive even if she IS a girl...in fact I could probably defend it as a feminist statement but I'll spare you...I've been grading today, can you tell?) and as for the mastitis...

...well, CRAP. Patently unfair and sucktastic on top of that. Here's hoping it responds well to your antibiotics and you're able to return to normal production afterward! You poor thing, you really are going through the entire wringer start to finish in your childbearing, aren't you? You have my sympathies on the whole enchilada but MASTITIS...seriously. Enough. Yuck. Feel better!

Welcome home, Bobby! I bet he misses his sister and can't wait for her to be home - I am so happy for you!

So happy that Bobby is home.
Hope Maya will be home soon. Enjoy your walks.
:)

So glad to hear that Bobby is home! Come on Maya!!!!

Welcome home Bobby!!! It must be incredible having him home where he belongs. I hope Maya follows soon!

Boo. Mastitis. It can wipe you out so much, much like the flu. Take care of yourself and keep pumping like crazy. Rest. Rest. Rest. (Easier said than done.) :)

good news all around - yay for bobby! - but boo on mastitis! i've heard it's terrible.

Sorry about the breasts. ((HUGS))

I was like that too, I hated hte thought of formula. Eventually I eased up and now I dont mind. We B/f 99% of times but i have formula in my bag unmixed in case we are out and babelet wont eat (she doesnt eat in public for some reason, too many things to watch and play with rather then eat) But i agree, it stinks. And it smells powdery. But its ok from time to time even for moms that want to bf exclusively. I was frustrated in the beginning but now i know better not to worry, its one less thing to stress about. HOpefully you'll learn it too. Its really the next best thing to breastfeeding. And one other trick i learnt: try feeding him after you just pumped. You will still have enough milk for him most likely ! Let me know if you tried and if it worked

Welcome home Bobby :D I hope that Maya is soon to follow. Congrats and I hope you can get back to breastfeeding ASAP. So happy for you!!!

So glad to hear that Bobby is home! Yay!! Boooo for the mastitis!! I had that when I was BFing my daughter. It was no fun!! My milk supply dwindled a little too in the affected breast. I kept massaging and pumping and downing the fluids. I hope your production will go back to normal. I always hated using formula and wish I could've BF longer. That stuff is so stinky!