Updating from the weekend... (It's been a busy weekend; we werent even home yesterday at all.)
Friday night, we gave the babies their baths completely unassisted. Peter bathed Maya, who did really well and, although she gave a few false starts, didnt cry a bit. I bathed Bobby. We started off with a cry (we think because the water may have been too warm, so Peter added some cold to it and things were much better) and he let out a cry during the leed removal, but he, too, was a trooper. I dried them both off, which was wonderful. Clean babies!
Bobby and Maya started bottle feeding on Saturday! They had an AWESOME dayshift nurse on Saturday and Sunday who challenged them just enough. It was tiring for them (after all, that all sucking-swallowing-breathing thing is still a challenge!) but they both did a great job! Bobby took in 17% of his feedings for the day and Maya took in 11% of her feedings- not shabby considering they dont start most babies for another week! Bobby topped 4 pounds and Maya is over 3 and a half pounds and catching up. Both are more than happy to fill their diapers (no complaints- it means everything is working).
Sunday, Peter's parents came for a visit in the late afternoon and his dad held the babies for the first time. We fed Maya before they came and she was held second, since I was finishing her bottle. Bobby did a nice job tolerating his hold. He was still fairly asleep but woke up periodically. We traded off when it was Bobby's turn to have to his bottle. He didnt take so well. We all agree he was just too stimulated to eat well, which was a minor setback. In the future, we wont do visits prior to both of them eating. It's just too much. After the visit and while we were having dinner (we had to leave because of shift change), he had a bradycardia spell and she had an apnea spell. :( It was a busy time for them. We came back for the 8pm/9pm visit and they were both out cold. We opted not to breast or bottle feed and the nurse gave them their meal though gavage. We actually left at 8 and I pumped, just because we didnt want to disturb them. We came back at 8:30 and did their care time together, which was nice. They were still tired but once we were finished with the temps and diapers they were more awake. We held them for a little while, until they went back to sleep and were finished with their milk (delivered over half an hour through the pump), and then put them to bed. Bobby had a second outfit change, since he peed all over his outfit while Daddy was changing him. This is funny because he was out of short sleeved onesies due to peeing through his diaper a couple of times, so we dressed him in one of Maya's pink ones! His sleeper is still 100% guy but he's sporting hot pink underneath. I have a bag of laundry to take back and 2 bags of dirty at home. These kids go through it! And they arent even home yet!
Yesterday, Maya's weight was 3lb 11.9 oz and she took in 20% of her feed total by bottle! To quote the email I received this morning, she is doing so well that she will be "busting out of here soon!" From your mouth to God's ear! Bobby's weight was 4lb 2oz and he also took in 20% of his feed total by bottle. Woo Hoo Babies! Keep up the good work! 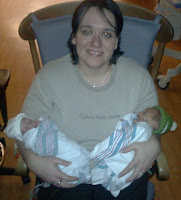 (more pics)
Today, I am doing the early visit (8am/9am) instead of my normal (11am/12pm) so that I can, possibly, investigate upgrading the Volvo... We shall see. I will probably need a hardcore nap in the middle of the day. I also have 2 pediatricians to call and make consults with. Both are within walking distance of the house... Nice. :)
Posted by Michele at 5:49 AM

I am constantly amazed at how well your adorable little babies are doing. I'm always so happy after I read such positive updates! YAY!
:-D

Michele! It's sooooo nice to see a picture of you with your gorgeous babies! Congrats on being home.

WOOHOO babies, indeed! SO happy that they continue to do so well. And I LOVE that picture of the three of you!

Sounds like they had an awesome time with Grandma and Grandpa!

Sounds like a great weekend for Bobby and Maya. I can't believe how big they are getting. Great job Mom! You were certainly busy.
Good luck with the upgrade of the car. You look very well rested and really happy in the photo. So much different then several weeks ago.
I am so happy for all of you. This is what life is all about and I am so sorry that you couldn't have this with Nicholas, Sophia and Alexander. Today is good.

I am so happy that your twins are doing so well. They are strong kids just like their parents. It sounds like they will be going home soon. I can't wait for that day to come for you guys.

So glad to hear they're doing so well! What awesome weights they both have! I am excited because it sounds like the time when they'll be snug in their cribs at home is fast approaching. You look like such a proud mama in your picture. Thanks for taking the time to post lots of pictures ... I know you're busy, but it's always so nice to get a peek at Bobby and Maya.

Oh Michele, each day they are getting bigger and stronger...they will be home before you know it. :)

oooo they are getting lovely and big. Go Bobby and Maya!

I did smile at Bobby's secret hot pink onesie! It is amazing how many clothes they get through.

I'm sure they will be busting out of there soon, home to you and their Daddy. xo

I agree with everyone else, my they're growing and developing so fast. Funny about the pink on Bobby. I dressed my boy in some pink clothing too that originally belonged to his aunt (who is 2 years older than he is). They look so cute!! Did you take pictures of it? (to embarrass him when he's 18 and bringing home his girlfriend. hahaha)

i love the picture! look how big they are getting! Yeah babies!!