Bobby and Maya are 3 weeks old. 3 weeks ago, at this very time, it was becoming apparent that my contractions couldnt be stopped and that the babies were coming. It seems like such a long time ago in my head but then it feels like it was just yesterday that they were born. I look at the calendar, newly flipped onto October, and there is just no way that they are three weeks old... But they are. And they are doing so well.
Bobby now weighs 3 lbs 2.2 oz and Maya is up to 2 lbs 9.4 oz. Their feeds were increased and he is now up to 27ml every three hours and she is close behind him at 23ml every 3 hours. They both have minor reflux so they eat with their beds on an incline and have their milk given to them slowly over half an hour (Bobby) to an hour (Maya), which makes a big difference. He is now dressed, his isolette is set to 28 degrees Celsius (the lowest it can go), and he is making his transition towards an open air crib (once he hits 1500 grams; he has about 80 more grams to go). They had to remove part of his blanket set and his underonesie because he is keeping his temp so well and they dont want to go from his isolette too quickly. Maya will be dressed once she hits 1200 grams (she has about 30 more grams to go) and then her isolette temp will be dropped. Once she is able to maintain her body temp in 28 degrees and hits the 1500g cut off, she would go into the crib. They will be 31w gestationally on Saturday; the earliest babies have been released from the NICU is 34w. Could it be just another 3 weeks? They stress that the average is 36-38w, so to not get too excited... November is "most likely" when they will come home.
When I went in for the care times today, it was "canula nurse". (After witnessing her interact with other babies and a doctor last week, where she had to be walked through what it means to be sterile, Peter really was left with even more of a bad taste in his mouth for this nurse...) She said that both babies were doing really well and asked if I was going to hold them. I explained that I would be holding him since he was dressed, but that we would save our kangarooing for tonight with Peter. She said that Maya was so stable that she didnt see a reason why she couldnt be held twice in one day too! So, she put Maya in a onesie (that swallowed her little frame completely) and wrapped her in a blanket and I got to hold her!!! 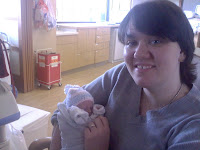 You can see that her little hands are dwarfed by her onesie. It was so cute. She wasnt as awake as Bobby was yesterday. I think the light may have just been too bright. She watched me and looked around, but she was definitely happy to just go back to sleep. I told her how much I loved her and just talked to her... It was so wonderful to hold her. She spent about 45 minutes in my arms until... 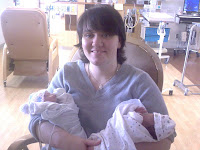 She was joined by her brother! (Maya is on the left, Bobby is on the right). The nurse asked if I had held them together and I said that, once, we had, when kangarooing, so she started his care time early and brought him over! I held them for about 15 minutes together and then it was time for Maya to go back into her isolette. I held Bobby for 15 more minutes. He was lightly desating (the alarm is set to go for below 82, he was hitting 80 and sometimes 78). The nurse mentioned it could be the rocking motion of the chair, but told me to keep rocking, since it was calming to babies. After 15 minutes, she said "Why dont we put his canula on?" (I swear, I think she really is canula happy!) Mind you, he had no issues before being held... And normally we dont rock; we sit in a recliner and he is around 95-96. So I said no, that I'd rather put him back in his bed, if it was the holding that was causing the drop. While I would have loved to have held him forever, I dont think he should have an intervention that he doesnt need. And the nurses we trust dont think either of them needed her to put canulas on them last week (and the only reason Maya still has hers is because it has helped slightly with the reflux). So, she agree and back to bed he went. He was pretty tired because he'd fallen sound asleep on me and when she put him in the isolette, he took his snuggly and stayed asleep.
I was so tired when I got home that I just crashed. I didnt even bother to pump; I just needed a nap so badly. I could barely stand at the sink to wash my pumping equipment. Finally, when that was done, I gave in and crawled in bed. And slept. I must have fallen asleep as soon as I hit the pillow. I set the alarm beforehand (otherwise, I'm sure I would have slept a lot longer) and took a nice, 2 hour nap. Then, of course, I had to pump! In a few minutes, I'll finish up and go make dinner and then we are back to the hospital for nightly holdings! Woo Hoo!
(Oh, and for those who have asked about the c-section... It is still sore but healing. The ridge is significantly less and the incision is still closed. The drainage continues and, as it does, the cellulitis and ridge decrease. Peter made the comment of "dont you just wish that fat always worked that way and you could just leak it out?". No, I really dont wish that my body just leaked... Actually, I think it is quite nasty! My belly still feels like a bruise but it doesnt keep me from walking around and doing things. I have my follow-up on Oct. 30th.)
***
3 posts in one day. Wow. I need to do something else today!
Posted by Michele at 4:24 PM

It is so wonderful that you got to hold Maya and Bobby today!!!! They are precious in your arms. I hope from here on out you get to hold them both each day. May they get stronger an gain weight each day. God bless your family.

SQUEALLLSSSS I haven't read anything but the header yet and saw two swaddlings and screamed!! so exciting, ok. going to read now. sorry for poor grammer. just not good day. xoxo, Kandi ann

Oh my gosh, you three look so beautiful. Every time I log in it seems like the babies are bigger and stronger and another day or week older. I'm so happy for all of you!!

I have to confess that, still having trouble getting my own family started, there are plenty of pregnancy/parenting blogs that it pains me to read. Yours is not one of them. I love your blog and love how wonderfully things have turned out this time for your growing family. It really does my heart good to hear of your progress and theirs.

Thank you for the updates. I can't believe it's been 3 weeks. I love the pictures of you holding them.
The days are just flying by for you. I am so happy that they are doing so well. So when will you start nursing them? Have a great evening with them. God bless.

Happy 3 weeks! It seems like it's gone by so quickly to me, so I can't even imagine what it seems like to you. So glad to hear that things are going well.

I'm so thankful to God that Bobby & Maya are doing so well. You're beautiful! I love you & can't wait to see everyone in person!

What a great picture of you and the twins. Its so great they are doing so well. :)

YAY!!! They are doing so well!!! I know you still have quite a NICU journey ahead of you, but WOW!!! They have come so far already. I'd definitely say that their sister and brothers are watching over them. Congrats on Bobby and Maya's improvements - they are gorgeous!

Oh three cheers for your beautiful, strong babies! I swear, you all give me hope. Thank you for sharing your journey with the rest of us.

Yay, happy 3 weeks, Bobby and Maya! You look like such a proud mama holding your twins!

Happy 3 week birthday little ones! Keep on growing and thriving!

i love the picture of all 3 of you together!! that must be heavenly holding them both at once.

so glad that you got to hold them together! Maya looks too cute in her onesie

Happy three weeks! It's wonderful to see how well the babies are doing, and how close they are to the next set of milestones.

What an amazingly special day - I am so glad that the twins got to be so close again. :)

Ah the happy-tired look of a mama to little babies... it's a beautiful thing! :)

I realized this morning that I always check your blog first, not because I'm worried something has happened over night, but because I need to start my day with a dose of good baby news! Yayayayay!

I love that you got to hold both babies! That's a wonderful picture. Glad to hear they are progressing so well.

How wonderful to hold them both and be able to clothe them! What a great picture of you with both babies.