Many moons ago, I was a yoga teacher.  Like, that was how I made my living!  I traveled to a lot of different places to teach, including a facility for adjudicated youth up near the Poconos, and I taught at a fair amount of local gyms and studios.  My knees started to go, we needed more income from my employment, and so I backed away until I wasn't teaching at all.  It was a sad thing, but at the same time, other doors opened for me professionally, so I'm not regretful.  Ultimately, things led to where they are today and, for that, I'm really grateful.

But I miss teaching.  I've kept up and written on yoga and yogic philosophy for magazines like Yoga Magazine and Yoga Living, but it's not the same as giving a class.  (And, honestly, I havent even written about yoga in over a year!  I barely have time to blog!)

As a part of Mending Heart Bellies, I wanted to offer prenatal classes... But then I thought, why stop there?  I kept getting calls about teaching yoga each month (one or two), from folks who'd found my info somewhere (does Google ever get rid of anything???) and so I started talking to Peter about the idea.  Why not teach again?

Peter didnt really want me to start the rotation of teaching at gyms, etc again.  I did a lot of driving (depending on the location) and, while it was fine when I was doing it 'full time' and wasn't trying to raise kids and keep house, it wouldnt work now.  I agree.

But then, just as that window closed, a full fledged door blew open.

I mentioned earlier that we turned the nursery (formerly Maya's room) into a playroom for the kids (I'll blog about the playroom later- it is AWESOME).  So, that meant that, in our downstairs large room, we still had the pool table on one side and the other side was empty...  I'm sure you can see where I'm going with this...

We looked into local ordinances, legal stuff, insurance stuff, etc...  Then, we started working to make it happen.  Peter and I moved the pool table to the side where we previously had the playroom (which is where the bar is, so it makes more sense to have the pool table there, in my opinion).  And, in the blink of an eye, what was formerly a thought became a dream come true...  My very own (home) yoga studio!  I can comfortably teach 4 students, and can have 6 students should the need arise.  I have props and mats.  And, to block off the pool table (and 'man area') I have these awesome folding shoji screens.  Pretty nice! 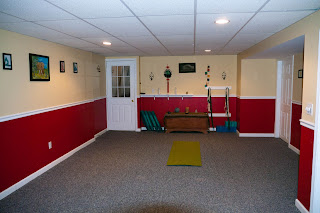 You can see all the photos of the studio at the Facebook page.
What makes this space so incredibly awesome is that it has its own bathroom (yay!) and its own entrance.  I wouldnt leave the kids alone while teaching, of course, but the idea of being able to lock the upstairs off when I'm teaching a class gives me an added sense of security.  And, because it is a small studio, classes are not drop in.  (Most of the small studios, like the one where I actually took prenatal yoga when I was pregnant with Alexander (and is also a home-based studio), are not drop in.  Space is an issue, but security is as well when you are teaching out of your home!)

So, Yoga Solstice is back!  (and you can even like YS on Facebook!)  It's wonderful to feel like I'm getting back into something that really touches my soul and inspires me.  I've already practiced down there and the space feels so... right.

Thanks to Peter, I've also been able to get some quasi-decent shots of the new space, so enjoy!  And, downward dog anyone??? ;)
Posted by Michele at 1:51 AM