4 months... That's 1/3 of a year. My babies are a third of the way through their first year of life on the outside. Why is that so rough? This week, on Thursday, they will be 18 weeks old. They are now older on the outside than Nicholas and Alexander were on the inside. And, on Thursday, they surpass their big sister, Sophia. They will be older here than any of my other children ever were inside of me. And at the end of March, they will be on the outside longer than they were on the inside. At the middle really, since the first 2 weeks of pregnancy, they are not there except than in the form of my eggs... Time has gone by so quickly.
As we were in the restaurant on their 4m birthday, we remembered their milestones... They've been to quite a few restaurants in 4 months. Elevation Burger (several times), El Bodegon, Olive Garden, Pure... Not bad for infants! And they are always so good. They sleep or look around or eat. At Pure (which is NOT the kind of place you take children, let alone a baby), they were perfect. I had called ahead and told them the skinny (that we've been there in the past, would love to come but have 4 month old twins, were they interested or wished we'd rather not?). They were sooo accommodating. They picked a special table for us that had enough room for the stroller to sit next to us. They brought our drinks and took our orders and timed our first course so that we could feed the babies and then eat. The kids were great and a lot of folks stopped by our table to see them. Only in NYC will a complete stranger fix your child's pacifier! :) We took some really special pictures. 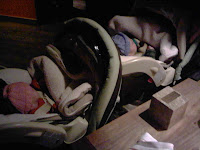 The kids have now eaten rice cereal, oatmeal, bananas, and green beans. They liked them all! I still cant believe they are old enough to eat... How insane is that. They prefer eating off our fingers and eat with such gusto! However, they will also eat off spoons (they just dont like it as much).
I made a pie yesterday for Sophia... I cant explain why, but I felt like she was saying, "Make a blackberry pie." So I did. Her 23m birthday is on Saturday, but it just felt right to make it... So, we'll eat it tonight! I'm skipping my Body Flow class for the Respect Life Committee meeting we have on the second Tuesday of the month. I had Pilates last night and figure I may hit the gym after the meeting for a swim; otherwise, I'll skip today and go tomorrow. Plus I have another Body Flow on Thursday. Cant miss my 3x week! I'm hoping to post that I hit my 2nd week goal!
Some of you may remember that I was on meds for high BP but that I came off of them in the hospital. I had a check up this morning and my BP, while higher than average at 126/88, was lower than my normal. My doctor offered HCTZ to help lower the bottom number, but we opted to recheck in 3 months, in the hope that the working out will help drop it a bit more. If I could go drug free, I'd be thrilled. Peter and I both had appointments. We got a booster vaccine for Tetanus, Pertussis, and Diphtheria. We had blood drawn for several panels. Just an overall "check up" type visit. Peter hasnt been since his Navy physical- in 1995!!!
Well, the twins are waking up. They had a busy afternoon. Peter's mom came and sat with them in the car while I ran some errands. I needed to hit about 5 locations (dry cleaners, pharmacy, etc) for short, 2-minute visits, and she offered to stay in the car with them so that I didnt have to unpack them at each visit. It meant that we did it all in an hour!!! It would have taken at least twice as long alone.
Posted by Michele at 3:37 PM

Can I hire your M-I-L? So funny you mention that, as I just facebooked on Sunday that I wish I could hire someone to sit in the car (which always seems to coincide with Lil Pumpkin falling asleep) so I could run errands!!!

I can feel your conflicted emotions about the time in which all of your babies have been both in and out of your body. Sending you prayers of peace and love.

I can only imagine how torn you must feel. I'm so glad you have your living babies, but I know it cannot take away the pain. It's how I perceive ttc again.

As always, remembering your babies...

Sending you warm thoughts and hugs both as you celebrate the twins, and mourn your children in Heaven.

I can't imagine how you are feeling. I do know that you are a wonderful mom to all your children from what I see. I can't believe how big Bobby and Maya are getting. They are adorable. I will be thinking of your Sophia Saturday. xx

I'm glad you had a good time at the restaurant (really wish I'd been able to meet you there!!!) and tell you how lovely your babies are - thinking of you and your family.

I hope you enjoyed Sophia's pie.
Thinking of you and of all your beautiful children. xo

Glad you had a good time at the restaurant. Not just in NYC will strangers fix your child's pacifier though; in China, many people are happy to come over and fix a pacifier, blanket, scold you because your child's not dressed warm enough (i.e. any skin showing) as we found out.

Glad you were able go and eat while in NYC. I am so happy that they are doing so well. I am also glad that you take them out and about all the time. Pretty good news on your BP!

I don't know why, but I love that she told you to make a blackberry pie :)