We invited family over on the 15th for Sophia's birthday eve dinner. Peter's parents and his aunt, along with Nicholas and Sophia's godparents were in attendance. My dad had a dental emergency earlier in the week and was still under the weather, so he opted to stay home. For our little princess, I made a pink and purple castle cake. 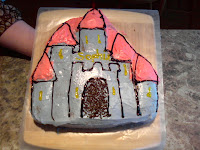 We began the 16th with her birthday Mass. Quite a few of our friends came. It's so wonderful to remember our children with others. I'm so grateful for our friends who don't shy away from our children, but celebrate them with us. It means so much to Peter and I. For her actual birthday, we had hoped to spend another day together, relishing in our memories and remembering our special little girl, but sadly, Peter's great-aunt passed away. Her birthday was actually the 16th also; she died on Valentine's Day, in her late 70s. The funeral was on Long Island, so we left after breakfast and drove out.
On the way home, we still wanted to go to the beach and take pictures of us with their box. Where better than Coney Island in Brooklyn! Peter's grandparents and parents spent many a day on Coney Island, and I've been begging to go for nearly 11 years. (To a southern girl like me, Coney Island is the "real" New York pasttime!) So, we went! The amusement park was closed, of course, and it was cold and windy, but it was a birthday befitting a child. :) We walked around and looked at all the sights, like the Cyclone (the famous wooden rollercoaster) and the Wonder Wheel. 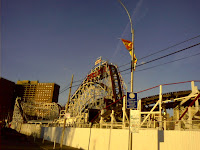 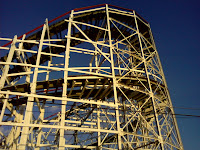 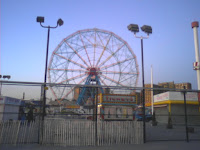 And, what visit to Coney Island would be complete with stopping at the original Nathan's! Peter and I walked the block from the boardwalk to the old fashioned building and stood in line with the throngs of others out for a good hotdog. Even us vegetarians couldn't stay away! (And, I craved Nathan's during the twins' pregnancy, so it was fitting.) Afterwards, we went next door to the candy shop and I ate a caramel apple and bought some cotton candy for home. 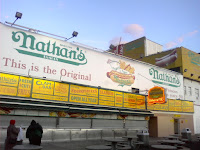 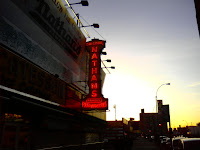 And then, back to the boardwalk and then the beach we went. The wind was fierce, but as the sun set over the New York sealine, I swear you could hear the laughter of children (especially one little girl...) in the breeze and smell the smell of baby powder in the sea air. 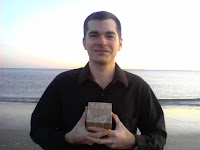 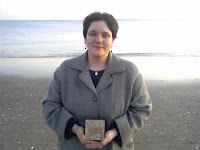 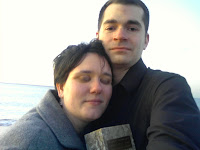 When we arrived home, several hours later, I broke down in the car. At times, the reality of their deaths hits me so hard, as though I didn't know and suddenly woke up. I cried so hard that I was on the verge of puking and Peter... perfect, perfect Peter... just held me until I could stand on my own and walk into the house. We lit Sophia's birthday candle and opened her cards (plural... in addition to our card, our dear friends J, E, L, & D created beautiful birthday cards for both Nicholas and Sophia!). We sang happy birthday and watched the candle flicker before her daddy put it out. We ate her special dinner and then had some of her cake. And once again, we talked about our special daughter and how much we love her. 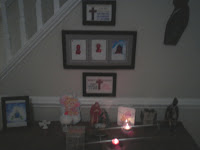 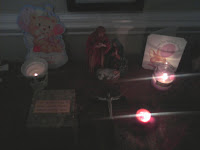 My dear sweet Sophia... My beautiful little girl. Looking into your face and seeing my own was one of the greatest of treasures because now, whenever I look in the mirror, I can always see a piece of you looking back.
After your big brother was born and went to heaven, you were what kept me going. It was being your mother- for as long a time or a short a time as we had- that gave me the will to live. If I was breathing, you were breathing. If I laughed, then you laughed. I laid in bed for those 2 weeks, hands constantly on my belly, feeling you move from side to side. When you were tired, you would curl up under my hands and fall asleep. How wonderful that feeling was, especially in the wake of such loss. But I can only imagine how much you missed your brother... your friend... your playmate... your other half. Your daddy understands, I'm sure, so much more than I.
The night before you were born, my entire body ached. I think, on some level, I knew your birth was going to come sooner than the 24w pregnancy mark that I was praying we'd get to. But, consciously, I don't think I thought that. Your daddy, sweet man that he is, rubbed my back all night, so that I could try and sleep. At 2pm the next afternoon, my water broke. The pain was intense and, sensing a problem, your father called the same EMTs who were with us after your brother's birth. They arrived within moments and took such good care of us. While in route to our house, the chief called the helicopter, who met us at the local school. Your dad rode in the helicopter with us and we were at the hospital in less than 15 minutes. There was a light snowfall and the sky was so blue... It was almost like summer...
The doctors couldn't stop my labor once an ultrasound revealed that you had started your descent from my womb. Had we gone to the hospital that night before, could we have saved you? That question plagued me (and plagues me still), even though I know your labor was my body's way of trying to save you. The infection that had hit your placenta would have made carrying you impossible and would have made you sick; in their attempts to save you, the doctors who cut your brother's umbilical cord so high left just enough to get an infection. They did their best and that gave us 2 more weeks with you; how grateful I am for that time.
Your labor was hard. I was afraid I wouldn't survive. The pain was great, but it was magnified by my broken heart. Your daddy was by my side the entire time, helping me breathe, being the solace in the storm of fear and uncertainty. When you crowned, he was there to catch you. I can still see his face, the most beautiful expression of fatherly love, as he watched you enter this world and held you in his hands. The nurses were there soon after to cut your cord. He quickly baptized you and held you until you journeyed to meet your brother whom, I'm sure, met you with open arms.
When your father put your perfect little bundle into my arms, I wept with joy at the face of my daughter... My beautiful daughter... How was it that you chose me to be your mother? That I was given such a wonderful gift? A million thank yous.
We held you and sang to you, wept and laughed, memorized every curve. I remember the softness of your skin, your smell, the way your forehead felt under my lips as I kissed you what must have been thousands of times. What I wouldn't give for that feeling now.
My princess, Sophia... I love you more than words can say. Happy Birthday, my dear little girl. Happy Birthday.
Posted by Michele at 3:03 PM

You gave your daughter a beautiful birth day. I like the castle cake.

This is a beautiful and touching story. Thank you for sharing it with the world so that we can rejoice in your childrens' lives with you. May you find peace in your heart.

Birthdays just take on a whole new meaning now, don't they. We give birth on that day. That's pretty much it stripped down to the letter, isn't it.

What a wonderful tribute, and I'm so incredibly sorry. Remembering sweet Sophia this week, along with yours and mine.

What a beautiful tribute. Thinking of you and your little girl today. Sending hugs and prayers...
Here via LFCA

Here from L&F. What a wonderful way to remember her. Thinking of you.

Thinking of you and your sweet baby girl today and always.

Happy Birthday to your sweet girl.