Looks like I have a lot to catch up on in this blogging session.  Michael is napping, I'm pumping, and the twins are visiting my in-laws, so hopefully I'll have a nice, fifteen minute pop to give you a marathon session of blogging!

First off, Michael was christened on Sunday!!  I don't have any photos yet, but it was a beautiful day and we were all just so thrilled.  I'll give a play by play once I have some photos, but suffice it to say, it was just awesome.

My mom arrived the Thursday before and her first question once we were home was "Do you have a ladder?"  She hadn't been here an hour and she was cleaning out gutters.  Her second key question: "Is there a Lowes near here?"  Two trips to Lowes and her gardening hands later, and my yard was transformed.  Every time I look at the hanging flower baskets, the newly mulched beds, or the bright yellow mums, I miss her.  She left yesterday and it's been empty here without here.  Last night, Bobby was finishing dinner and looked up, asking "Mimi?"  And Maya kept telling me yesterday before she left for school that "Mimi will be here" when they got home.  I wish, kiddos... How I wish.  But her visit was wonderful and I am SO glad she could make it.

Yesterday, Michael was 13 weeks old and today, he's officially 3 calendar months old!  He's full of smiles and is starting to grasp at toys (much to Maya's happiness!).  He will bear weight on his legs and has even "stood" while holding my finger.  It's crazy to think that time is going by this quickly.  In the next few months, we'll be experimenting with solid foods...  He's still an awesome nurser and I hope that remains his primary source of nutrition but I have a feeling that, like Bobby, he's also going to LOVE eating food.
Since he's still sleeping, I'll get a "3 month old" picture when he wakes up.  We started our day with a 5 mile run that ended up being 4.5 miles instead.  Not even a mile in, and I was sitting on the side of the trail, nursing...  That lasted him until the last half mile when he cried the entire time and I cut it short.  I held him as we walked back to the car and he was all giggles.  Adorable... until he realized we weren't eating until we got home!  Oh was he unhappy!!  Once home, he nursed a solid hour.

I had to go through his closet last week and toss the last of the 3-6 months.  He's totally in 6 month clothes now.  While he doesn't fill them out weight wise, he is just too long.  3 month onesies don't snap!  He also has been sleeping so well at night.  Last night, he went down a little after 7 and didn't get up until 4.

This is awesome for many reasons, but it will be great for marathon training.

Wait? What?  You heard me: marathon training.  Because, clearly, I don't have enough to do.

It's not unheard of for someone to train for a 26 miler in a month (although it's not advised... and, seriously? I'm not advising it.)  It's insane, but not impossible.  I've been running since Michael's birth and, while I'm not excited about doing the long runs I've mapped out for this month, I know that I can do them.  It's all about finding the time and wrapping my brain around doing them.  Running distance is 90% mental... I keep reminding myself of that.

For those that are interested, here's my mileage for the month: 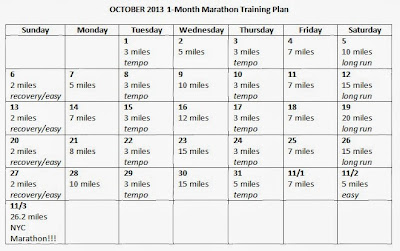 It's my hope to do the majority of the mileage outside; doing more than 3-5 miles on the treadmill will suck.  Tuesdays and Thursdays, I have XC practice, so that will up my mileage in spurts when I'm running with the kids.  Wednesdays (in October) I'm teaching prenatal yoga, so that will be a nice cross training; I also plan to do some XT on Sundays, since that's my "Off" day (2 miles at a recovery pace is really nothing, so I'm counting it as "off".  I just know that, if I don't do something, I'll be stiff and uncomfortable.)

Running with a stroller?  Yeah... when that tops a 5K, it (for me at least) really sucks.  In order to avoid doing long runs with Michael, I'm going to have to sacrifice some sleep.  Hopefully, if he keeps up with the 4am wake time, I can feed him and go out right after, getting home just as Bobby and Maya are waking up (and Michael is ready to eat again) on my longest runs.  On Saturdays, I'll play it by ear, since Peter is home.

What sane woman runs a marathon with a 4 month old at home? You got me... Clearly, not sane over here.