As I sit here, watching Michael smile and try to talk to me, it blows me away to think that, in 12 short weeks, we've gone from this:

to this:
Michael remains such a sweet baby. He is strong and tries to stand; he also makes noises, as though he is trying to chit chat.  And the smiles... oh the smiles!  He's a great eater and sleeper, and he has the growing thing down pat (his outfit in the pick? A 6mo one.  I'm not sure Doc will fit into his 'Baby's First ..." outfits!)

My mom arrives in 2 days (EEK!!!!) and Michael's Christening is Sunday! I am so excited. As the days pass and we get closer to St. Michael's Day, I grow more and more anxious.  The Christening gown is in the closet, tables and chairs (and a moon bounce for the monkeys!) are rented and scheduled for delivery, the food has been ordered, and the prayer card favors are on their way. 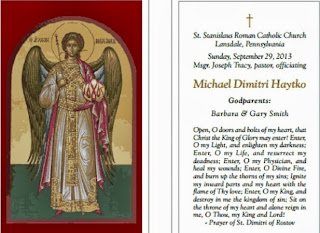 Open, O doors and bolts of my heart, that Christ the King of Glory may enter!
Enter, O my Light, and enlighten my darkness;
Enter, O my Life, and resurrect my deadness;
Enter, O my Physician, and heal my wounds;
Enter, O Divine Fire, and burn up the thorns of my sins;
Ignite my inward parts and my heart with the flame of Thy love;
Enter, O my King, and destroy in me the kingdom of sin;
Sit on the throne of my heart and alone reign in me, O Thou, my King and Lord!

For my part, 12 weeks has seen me lose 30 of the 55 pounds I gained with Mr. Michael.  I'm finally back at the place I was around January 2011 in the weight department, having finally busted through the plateau I've been stuck on for a few weeks.  I feel like I'm finally getting my mojo back; I'm running a few times a week, eating in a way that is back to normal, and starting to really feel like myself again.  It was tough; those middle weeks were unexpected.

Peter and I are having a date night tomorrow; it will be our first time out sans all the kids.  The twins are hanging out with my in-laws and Michael is chilling with his godmother.  As I spoke with Barbara this morning about it, it struck me just how different of a parent I am this time around.

It was so hard for me to step away from Bobby and Maya.  They were well over a year before I willingly left them alone and, even then, it was one of those terrifying, waiting-for-the-phone-to-ring situations.  I cried when I dropped them for several hours at my in-laws.  The idea that they were without me...Oh, it was hard to handle.  If they cried, I was on them like white on rice.  They slept next to us and then, around this age, when we moved them into their nursery (cosleeping together), I couldn't sleep.  It took quite a while to be comfortable with that transition.

Michael started sleeping in his crib; he sleeps long stretches and I'm only up once to feed him.  We put him down while we are all awake, so it is easier to put him in his room... and he stays there.  I keep the monitor, of course, so that I can wake quickly when he does to eat, but (other than the first night when I stayed on the couch and did struggle with sleep), he's in his room.  And tomorrow? I'm looking forward to dinner with Peter... alone... without my boob out of my shirt for a bit! :)

This is also the point with Bobby and Maya where breastfeeding came to an end.  It was hard and heartbreaking.  I pumped- for both of them, for the day- the same amount I pump when Michael naps to supplement him when I'm coaching or out for a run.  That's kind of crazy.  Back then,  I was doing everything I could think of to up my supply.  Now?  Nothing.  Just feeding my little guy and pumping once a day (if that).  There are days where I don't pump at all; it's at the point where the pump is usually in a drawer and I pull it out when I need it.

His pregnancy was so different from anything I ever expected after losing Nicholas and Sophia (and later, Alexander).  It was the polar opposite of Bobby and Maya's.   His life, too, has been his own.  You expect that you'll be different when parenting a younger child, but I don't think I ever realized just how different it would be.

There are times where I feel not grateful enough, as though I should shelter him more, hover more, follow more of the "recommendations" that are everywhere you look.  That somehow the feeling of "If it's his time then I can only be thankful for the time I had and let him go" that followed me during pregnancy makes me less vigilant of a mother since it has followed me throughout these last 12 weeks.  Don't get me wrong; just as I do for Bobby and Maya (and Peter, as well), I pray every day that I have a long, healthy life with all of them, that they will be protected and watched over.  But Michael's pregnancy took all sense of control away from me from the moment he was conceived.  And, for that, I'm actually most grateful.  Feeling like I had to just Let go and Let God as the saying goes took my focus away from the fear, and that has made me a different parent to not just Michael, but the twins as well.  I know that I can only do so much, only be so many places.  I can love them fully and completely and hope that they know just how much they mean to me so that, should their time come and we are apart, they feel my love and know that I will always be with them.  It doesn't remove the heartbreaking thoughts of what if, but it does make it easier to let them live without a mother who smothers and stifles them (even when, at times, I want to).

This morning, I went to school early so that I could by SCRIP (a fundraiser that lowers tuition by purchasing gift cards to local supermarkets and stores that the school buys discounted at face value).  As I chatted with the school folks, it came up that, in 3 years, Michael will be joining the twins at MDCS. When we were preparing to send Bobby and Maya to school, I ached.  I didn't want it.  There was a part of me that felt like it wasn't needed, but the bigger part was that I didn't want to let them go.  I didn't want to no longer be their main influence.  I didn't want to risk them getting hurt and me not being there.  I just didn't want them be that far away (it's a mile and a half away... yeah... very far.) It will be bittersweet when Michael goes because my baby will have transformed overnight into a preschooler, but I know I'll let him go...and it will be alright.  He will be alright.

12 weeks...and yet a lifetime away from anywhere I ever thought I'd be.

Hi Michelle! I loved what you wrote and can relate to so much of it. I just had my 4th baby 5 weeks ago! Glad to hear that you have gotten your groove back in the weight department! I think I am almost there!