I feel like my posts all begin with "the babies are well" but could we really want them to start any other way (except, maybe, "the babies are going home"... sorry but that isnt today's post...)
The babies are doing well. :) My dad went with me today for his weekly visit and held them for the first time (pics are posted). It was really cute. In the car, when I told him (because, even though I told him the babies had a surprise for him and that he couldnt smoke after taking his shower, he still had no clue), he looked at me wide eyed and said "They are so small! What if I drop them? I'm scared!" It was cute. I never expected to have to tell him that if he was uncomfortable, we could end the holding earlier than the 10 minutes. It was really cute. And, not only did he not smoke, he hasnt smoked since yesterday morning! And he was so proud when he told me that he didnt even have cigarettes on him. He just beamed. I'm really proud of him.
Maya tolerated her holding better than Bobby. Both were on the verge of sleep. I think that she was cuddled and calm, so being given to Dad, she stayed that way. She opened her eyes and looked at him (and smiled a number of times- Dad was convinced he was somehow tickling her). Bobby was cuddled but perhaps not as long (although he seemed calm when I gave him to Dad). He looked at Dad for a bit but after 3 or 4 minutes started getting ancy and then he started to cry and reach for me. Now, as sad as I was a) that Bobby was agitated and b) that Dad's holding was getting short, I have to admit that there is nothing like seeing your child reach for you because YOU and only you can fix what is wrong. He snuggled into my arms and immediately fell asleep. Cant beat that. Dad opted to sit and watch them sleep while I pumped, which I also found endearing.
I admit it. I cried. When he was holding Maya and I went to get a picture, the thought of "my dad is holding my daughter the way he held me" crossed my mind and then it struck me that she is the first grandchild he has ever held. There are 6 born babies, our five plus my nephew. Over two years. And Maya is the first he has held. And that really struck me like a ton of bricks. The second thought was that I could take it back even more years and add 3 more babies, and I gulped back a sob as tears flowed. I was able to keep it together but it still chokes me up right now.
While pictures are posted and up to date (as of right this second), here are two of my recent faves.
This is the picture of a little boy who, instead of nursing, decide that, yes the "ninny" was his, no he didnt want to eat but yes, he was comforted so dont move it! 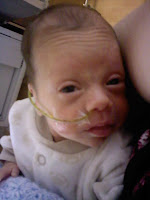 And this is the face of a little girl who was "milk drunk" after taking in half of her feed via breastfeeding in only 15 minutes. 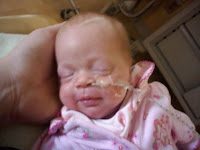 Are they cute or what?
Posted by Michele at 4:36 PM

They are precious :) And so is your dad!!

what an uplifting post. so happy for you, for your dad, and especially those beautiful babies! sending you congratulations, they just adorable.

They are both super cute but that photograph of Maya is simply priceless! She looks so contented. And she's feeding like a champ!

They are so precious!I am so happy that they are doing so well.Hang in there I am sure they will be home before you know it.((hugs))

They are so beautiful! Can't wait til we see them. Great to hear your dad is doing so well w/ not smoking. Love & Hugs!

they are precious!! i love seeing the grandparents holding the babies. melts my heart.

Oh yes they are cute! Love the photos with your Dad. They are looking so cute in those photos.
They are really filling out their little bodies. It is so cute, they are like night and day in their features. Adorable, I just love them. Have a great weekend.

What beautiful babies! I love to see them grow! How wonderful that your dad got to hold them and is giving up smoking- that's a great gift for the whole family :-)

Your dad looks so in awe of his grandkids! I am laughing over here at "milk drunk" Maya's face. That is classic! Thanks for sharing!

aw, your posts make me tear up all the time! lovely!

They are just too precious...keep enjoying every moment.

How wonderful it was to see your dad hold Maya!!! You're making me cry. I knnow it is bittersweet, but so glad he had that moment. Those are some really cute babies!!

Such a beautiful post! I chocked up just reading it!!! The photos are absolutely precious!! Those babes are really growing huh?

Michele, what a precious post. Not only of your Dad not having a cigarette...is he trying to quit? If so, that is wonderful. This is wonderful that the babies are doing so well. :)