Today my dad went with me to see the kids. He has Friday's off from work, so I told him that, if we was up for visiting them, I'd be happy to drop by and pick him up. He was really cute with them; he talked to them about teaching them to paint (I think he may have paint brushes that are longer than they are!) and he was really good about washing up, both in the scrub room before entering the NICU and with using the sanitizer prior to touching them. He touched their fingers and hands and had such a smile when they wrapped their tiny hands around his (to them, massive) finger.
I took in the smallest of the beautiful handmade preemie hats and booties and the booties fit but the hats were still slightly big (but fit them better than the hospital ones). Thank you again to everyone who sent such lovely handmade items. We will make sure they wear every single one! At this point, it is just a matter of them growing into them, LOL! Once they are moved into cribs, we'll be able to use the knitted blankets (for now, they can have their own receiving blankets in their isolettes but no knitted ones).
Both are doing really well. I held Maya for about 25 minutes and Bobby for almost 50. Some of it is because their monitors start going off (they are eating and it can be a challenge to be alert and held, eat and deal with reflux, and breathe). Their oxygen saturation starts to drop below 82% (which is when the monitor goes off) and we see that as them telling us "lay me down so I can go to sleep and digest!". Once they are back in bed, the monitor stops and they go back into the 90s. With Maya, unfortunately, I need to go pump, so I try to get there a little early to start her care so that I can spend as much time with her as possible. (pictures...)
Interestingly, we've found the singing to them helps keep their SPO2 high (oxygen sat). I found an article that also shows "music therapy" helping the saturation of premature babies. Very neat. "It is hoped that giving appropriate music therapy as developmental care to premature infants when performing any nursing intervention may enhance not only the quality of nursing care but also quality of the infant's life."
***
I received 2 things in the mail recently that brought me to tears (I know... it doesnt take much to make the hormonal woman cry...) A dear friend from England sent 2 beautiful outfits and toys (and by the way, the outfits are called "early baby" there; I think I prefer that to our "premature" labels here) and a card. The items are so cute, but it was the card that really grabbed me. In her perfect manuscript, she mentioned that she was thinking not only of Bobby and Maya, but of Nicholas, Sophia, and Alexander, and of our three (miscarried) stars. It is rare these days that people mention Nicholas, Sophia, and Alexander when they are busy sharing in the joy of Bobby and Maya's births. It is even more rare that, at any time, people count our miscarried little saints in our list of children. We are always touched when our friends and family mention all of our children, but to have all eight of these precious babies who have touched Peter and I so deeply mentioned... It warmed me beyond measure. It's the only card in the pile that mentions these dear brothers and sisters of Bobby and Maya. Thank you, C. I have looked at your card since it arrived. I am glad that you wrote what you did and that you signed it so completely. (On a similar note, at the baby shower, "Aunt Sarah" took great pride in explaining to me why the balloons looked the way that they did. There was a blue "it's a boy" and a pink "it's a girl" for Bobby and Maya and then there were 6 different colored balloons with little footprints on them. As she said "there are three for Nick, Sophie, and Alex, and three for the miscarried babies". Sarah (Nicholas and Sophia's godmother) is another who doesnt hesitate to mention the babies. She's called crying because she misses them too and something reminded her of them and she doesnt forget even their monthly "birthdays".)
The second arrival came right after I came home from the hospital. As I've blogged before, we were given a rosary that had been blessed by Pope Paul VI for the intention of difficult pregnancies. The woman who bought it in Rome and had the Pope bless it had suffered numerous miscarriages and finally, after getting the rosary and praying it through her next pregnancy, had a healthy, full term baby. She passed the rosary on to someone else who had endured loss and so on and so forth until it came to me. I would pray with it draped over my belly and it stayed next to the bed at home and in the hospital. When I was transported to L&D twice, it was with my cell phone in one hand and the rosary in the other. When I arrived home from the hospital and Peter brought the mail in, there was a package from Terri (who was my maid of honor, lives in TN, and is Alexander's godmother). Inside was a small box and opening it, I was faced with a beautiful "mother's rosary".

The crucifix is in the shape of roses, the flowers of Mary, the mother of Christ. 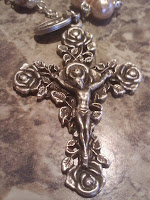 And the clasp that creates the rosary, instead of a saint medallion or a Mary medallion, is Mary cradling the infant Jesus and kissing his forehead. 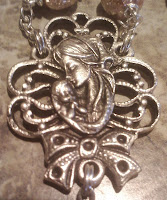 What a beautiful replacement rosary for the one that I have prayed incessantly for months on end. I'll be asking our priest to bless it, with the intention of motherhood, when I see him again.
***
Peter is looking forward to this weekend. It's "his turn" to hold both babies in the morning (since I will get to hold them both M-F in the a.m., we decided weekends are Daddy time). He cant wait. He's practically dancing in place knowing he gets to hold them both back to back. (At night, we are still alternating). Monday evening in a NICU benefit dinner that we registered for. Registration is 4:30-6:30, with dinner at 6:30... We are still trying to figure out how we can do that and make a visitation at some point. We are thinking he will take the afternoon off so we can see them early, although that means me basically living at the hospital that day. Or, do we see them afterwards... We arent sure yet. Not to mention when to work in pumping. We may see them before and after!
Posted by Michele at 2:51 PM

Love the knitted booties and hats they are wearing! How cute is Peter, daddies do get the "shaft" sometimes. (that is what my husband says at least) Glad that he gets to hold them this weekend! When will you get to hold them whenever you want?

So sweet about your dad holdin them!

You sound like you have some really good friends. I'm glad that they don't forget that in addition to these two lovely children, you had others too who are also deeply loved.

I love that you sing to your babes -- I'm a singer myself and have been trying to spend plenty of time singing to the chicklette in utero. I had music all around me from as early as I can remember, and the joy it still gives me is one of life's great gifts, IMHO.

Oh that is so interesting about the music therapy. Some of the nurses used to play music to the babies in the NICU where J stayed. I think she liked it and she still loves music now. She gets so enthusiastic and bops along, it does make me laugh. I wonder if she remembers the additional oxygen saturation she used to get from music.

The rosary is absolutely beautiful.

Hope that Bobby and Maya make the move to cribs soon. I know it is quite pathetic of me but I used to love, love, love choosing and making up J's crib. She had masses of sheets and blankets, all different colours. The doctors once voted her 'best dressed incubator' which brought me to tears. You aren't alone in hormonal crying! xo

Michele, the rosary is absolutely beautiful. Your friend in England is an absolute treasure to remember each and everyone of your babies. People who are will to remember our lost babies no matter how early they left us is absolutely rare. What a wonderful human being. :)

such a great post and it fills me with joy that you cling to the hope of Christ.

How incredibly beautiful. The rosary is just so delicate.

I am so glad that your dad got to go with you today. Grandparents can teach us so much and spoil us like no other. The gifts you got sound lovely, what a sweet woman and of course the rosary looks beautiful. Tell Peter to have fun with the babies. Have a great weekend.

I love how you've posted up pictures of Maya and Bobby on the side of your main blog page. And I love the caps and socks they're wearing too. everything about them is so cute. I log in every morning here anticipating more pics. hehe

How beautiful!!! I am glad everythying is going well with you guys. I am reading everyday, but unable to comment on my blackberry...with is now dead. I can't win for losing. :) I am praying for you and your babies.

Gorgeous rosary. I'm so glad you're all hanging in there - you must be exhausted, but you sound so strong!

Hi Michele,
those babies are beautiful, I love the photos, and it is incredible to see how much they've grown and changed in 3 weeks! I love thinking of you holding them and them holding you. Precious and wonderful and miraculous and just as it should be.

I love thinking of your dad visiting them too,
and yes, your rosary is beautiful, what a special gift.

Thank you for your kind support always, I wish this had turned out differently, and am hopeful as I move forward because i have to be. I have to be.

warm wishes to you,
Kate

Love the pictures and video. I'm so glad to see that they are doing so well.

BTW, have you been to Bloggers Unite lately? There's a big push to fight for preemies. Check it out: http://www.bloggersunite.org/events