I'm always posting cute pictures but I thought I'd share two from today that have me in stitches, instead...
Is it just me or does my daughter look kind of evil in this picture? Perhaps she's thinking "Get that camera out of my face or else!" 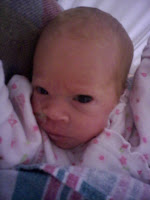 I cant stop laughing at this picture. That is his "I want to nurse" face. How can you argue with a face that cute? 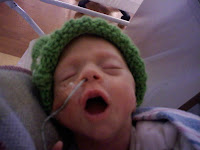 (And, of course, I posted cute pictures too...)
The babies are doing great. They are four weeks old. I cannot even believe that. It is insane. He's 3 and a half pounds and she's 3 pounds... They have gotten so big (I know that sounds nuts when the Thanksgiving turkey you buy is at least double them- together) and are starting to fill out their bodies. He's doing well with his temp outside the isolette (it waxes and wanes... sometimes he measures 97.4, the lowest he can and still remain outside; other times he's well over 98). She is quickly getting to the point where she will be on the outside! Both of them deliver lots of (STINKY!!!!) diapers and they are tolerating their milk increases well. They both still have some reflux issues but that has gotten better, which is a sign that they are growing out of it. They are also growing out of their bradycardia spells (when their heartrates drop and they need stimulation from the nurses to bring it back) and their oxygen saturation is mostly in the high 80s and 90s (over 82 is good). They tend to bring themselves back up whenever the heartrate or saturation drops, which is excellent. Gestationally, they would be 32 weeks on Saturday, so they are doing a great job.
It's great being told your kids are the most stable in the NICU; however, I have to say that I really love hearing they are the cutest. :) I'm sure the nurses say that to everyone, but to hear that my little stinkpots are the most adorable little ones... That takes the cake.
Posted by Michele at 3:55 PM

They are such a blessing. I am so thrilled each time you post about them and how well they are doing.
She does look mad and of course he is a typical man waiting to be waited on. Great pictures.

Happy 4 Weeks Bobby & Maya! I am so glad you are here safe & sound.

they're gorgeous. the pic of Maya (2nd last on the "our babies" blog) on 10/8/09 is pretty funny too! it's such a joy to see they are doing well and displaying more of their personalities for us to see.

Maya did look mad in that picture I think she was saying about time they get this tube out my mouth she looks more relaxed with it in her nose and Bobby's so smart he was waving hi to the camera already So far they look just like their daddy to me and Bobby is a spliting image of Alexander I hope that dont make you sad for me to say I think he looks just like his brother. Take care Neaneah

Your babies are so beautiful! It brings me to tears to look at the pictures and videos. I am 31 weeks pregnant with our first baby after a loss, and I cant help but look at your babies and imagine thats what my little guy is like in there. God bless you and your little ones :)

They are both just so very precious. It's amazing that they are doing so well - you all deserve such happiness!

That is definitely an "I'm hungry. Feed me now." face. And Maya does look a little fed up. I'm glad they're doing so well.

I had to laugh when I saw the pic of Maya. I swear I've seen that look before coming from you!

Love the pictures! They are getting so big, I love seeing your updates!

I left a little something for you on my blog!

They are adorable!!! I can't believe they are 4 weeks already. Time is flying by. So glad to hear that Bobby and Maya are doing so good.

I think they have to be the cutest ever!!! 4 weeks old already!!!

They totally have to be the cutest ones in the NICU. Every time you post new photos my heart totally melts.

I'm so glad they're doing so well. And they are cute!

Yay for the most stable babies in the NICU and I can see why the nurses would say they are the cutest too!!!

Just LOOK at those beautiful, growing babies! It makes me want to laugh and cry all at once! :) I'm so happy for you. And they are SO cute!