The Good, the Bad, and the Ugly 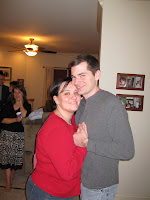 Last Friday night, we joined some new friends at a couple’s party. The idea was to leave your children at home and come celebrate your spouse. It was hard to be there, amidst the pregnant folks and those who talked about leaving their babies with sitters. What I wouldn’t give to have been able to talk about leave our little ones at home while we snuck out for a party… Who am I kidding; I’d never leave the house.

I told Peter when we left that I’d never seen so many young, pro-life, pro-NFP Catholics in one room. Typically, the mentality is that the 20-30 year old Catholics are the one pushing against the Church on those issues; but not so. The discussion was spirited and folks seemed so committed to their faith.

But, it was still hard. I think the roughest thing was that these were the moms I thought I’d be. The ones who stay home and mother their children while dad goes off to work and comes home to dinner on the table. The ones who raise their children with “good values” and dress them up for church on Sunday. The ones who talk to one another about the prayers little Suzie has learned or that little Joe just learned what genuflect means. That was going to be me, and then I was surrounded by them and realized how little I presently have in common with them. And it hurt. Because I so desperately wanted to be able to smile and nod and have something to talk about. Instead, I talked about the library because some of them knew me from work. Or I talked about the March. Or about how Peter and I enjoy our service to the Church. What I wanted to talk about was how Nicholas called me mommy or how Sophia learned to crawl or that Alexander was sleeping through the night. God, why? Why us? Why anyone?

Today, I had to handle the infant storytime moms for checking out. I have come to loathe this group. I have to say I was never in love with them to start with. Most of them have little (if any) control over what their 0-2 year olds are doing. They let them pull things off the shelves, fight with one another, and be unruly, without ever thinking that they are in a library. These are the tykes who grow into toddler monsters that we, the staff, have to chase around to stop from hurting themselves because mom is nowhere to be found. The moms sit and complain about being moms, being pregnant, etc., and can’t wait to drop their kid off somewhere and grab a cup of coffee together. Once again today, two moms sat and discussed how they wish they could go into premature labor because, as one so delicately stated, they are “so over this”. And, as her companion noted, her son was born premature and he was “fine”. I guess premature birth is overrated. And, because there is nowhere to go, I have to stand there, checking their books out, helping them find what they don’t need, hoping that somehow, by the grace of God, I wont go completely ballistic, telling them what utter fools they are and how they are so blessed to have children that are living and breathing. For once, I’d love to say “Would you prefer that your baby died? No? Then how about you stop our complaining.” Of course, that day will never come.

The worst part is that, unless you go through it, you’ve probably complained at some point during pregnancy. With Nicholas and Sophia, I remember saying just how tired I was of puking all the time. Now, I’d give anything to be in that place again. Why, God? Why us? Why anyone?

At 2am this morning, Peter and I went for our first official Adoration. It was a nice hour. We sat quietly, praying, really there. You’d think that 2am would be tough, but not really. We sat the alarm and got out of the house on time. Then, you get home and go back to bed. But that hour, there’s really the presence of Christ there. You can’t fall asleep. You just are… I like being there precisely for that reason. The problem is that I can’t seem to get that feeling to translate into everyday living. And part of the bigger problem is that I don’t really want to. I’d rather be home, doing housewife things, trying to be in the place that I don’t regret being while pregnant. It’s no secret that I think the stress and doing the heavy work of the library had impacts on my pregnancy. I remember telling Peter that I was quitting at the first sign of pregnancy after Nicholas and Sophia… But I didn’t. So much was going on with family that I didn’t feel like I could. And so, here I am.
Every time I talk to Peter, he tells me to quit. It’s a sweet thought, but it wont work. Quitting means not seeing Dr. Lee. There’s no way we can afford the copays in addition to our expenses if I’m not working. Not to mention other things. So, I get up everyday and come to a place that I used to love but that now fills me with such a rage at times that I cant even talk to Peter about it. Last night, he told me that, even though he likes his job, he wants to look for another one, an hour away, because the pay is better and then I could quit and be happier. Great. Now I have my husband doubting that he’s a good provider. Can life get much better at this point? I sure hope not. So, then we end up in an argument because I don’t want him to think about leaving a job he enjoys and that is stable because he thinks more money will make things better. I have a list of things that would make life better; money isn’t on it.

I know that God has a reason and that God will provide. But I am getting so tired. I feel like I’m being drug in different directions, that God is telling me to do one thing but that the means with which to do it aren’t there. I pray and feel like there are answers, yet they are answers that I don’t think I can implement. Part of me thinks that God is going to say ‘Then stop praying if you wont listen.”

Being pregnant again wont fix this. I get tired of folks telling me that it will. I get tired of people worried that I’m depressed. I’m just angry. Who wouldn’t be? A year ago, my life was good; now, I’m trapped in a nightmare that I can’t wake up from. I sleep a lot because it’s the one place where the nightmare doesn’t exist. I’m not destructive, just angry. I want answers that don’t exist and want a life I cant have.

I want more children. But they wont replace the ones I have. They wont take away the hurt and anguish at not having my Nicholas and my Sophia and my Alexander. Nothing will. I hide the way I feel from most people because it is easier that way; I’m sure more children, with enjoying their lives and being there for them, will come with my hurt and grief going a layer below the surface, but not for one moment will it not be there. Why do people who’ve never experienced a loss seem to think that having another baby will suddenly make the world right? Why do people think the phrase “One day, you’ll be parents” is okay to say to parents who’ve lost an infant? Worse, why do people think they can create some sort of mitigating circumstance with “Well, this was all for the best” or “There must have been something wrong with the baby”.

It’s been a long day and it’s only 3pm… I think I’ll go bury myself in books for a while…
Posted by Michele at 3:05 PM

I'm so sorry you have been in such pain. I think of all the times I complained while I was pregnant too. It makes me feel horrible - like somehow I made it happen. But you have to remind yourself that it wasn't you at all. You had no control over the situation. It was just a really terrible horrible thing that no one deserves to have happen to them. I'm sending you big ((HUGS)) and I will be thinking of you. I hope you can find some peace.

Hi, i just wanted to send you a hug and tell you that your blog really helps me. I am 18w today and even though I have no complications and no signs of any troulbe I think about you everyday knowing that things can go wrong any time. Like you say, I ask I hope not me, I hope not anyone. But your strenght gives me strenght back and I hope for hope for every parent not ever to go through anything like you did yet alone twice. Thanks for sharing your blog with us
Molly, BC

Thinking of you Michelle.

This is a tough tough road. And who knows how long we will be on it?

I'm sorry about the experience in the library. It is tough. It's always tough.