My dad is a painter; he's been a painter for decades, but when he moved up here in 2004, he got back into painting on commission, and does some work on the side.  He does a lot of portrait work by photograph, and, although I'm biased, I think he has a gift.

He mentioned, many moons ago, that he wanted to do a family portrait for us.  He bought the canvas months ago- last summer I think- but I had said to not worry, since I knew he had some other "paying" work in the queue.  He had initially intended for this to be a Christmas gift, but, like I said, no worries... no rush.

He told me, a few weeks ago, that he had started working on our portrait, but that it was difficult for him.  I knew going in, that it would be.  When he mentioned wanting to do a family portrait, he told me that he wanted all 5 of the children included, but that he wanted them to be age appropriate to Bobby and Maya. Since the only photographs we have of the children are, of course, right after birth and weren't the greatest detail for an artist who wants to study cheekbones, etc, I knew he was going to have a rough time.

Add to this, that my dad hasn't come to terms with the fact that Nicholas, Sophia, and Alexander have died... Every now and again, he'll ask to see their box.  He knows of them, of course, but he couldnt bring himself to say their names.  It hurt too much. That hurt me, but I understood.  We all process grief differently.  I've never buried a grandchild- let alone 3- so I dont know what he's gone through.  And God willing, I never will.

Last week, he brought a large canvas, covered by a blanket into my kitchen, and unveiled his work.
(keep in mind, this is from my cell phone and does NOT do this painting justice) 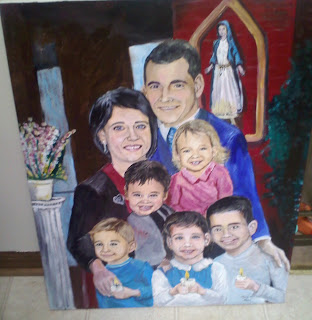 The bottom row shows Alexander, Sophia, and Nicholas, with Bobby & Maya in the middle, and Peter and I around all of them.  The background is our church.  And, although you cant see it well, he placed the pendant Barb made me as a broach... and, using artistic discrepancy, made 4 hearts inside... The four hearts we never heard and were unable to hold outside the womb.

I'll get a better, more detailed (and non cell phone) picture, but this gives you the idea.

I choked when I saw it.  I was finishing my lunch and didnt expect to be overwhelmed the way I was.  But, what got me more was, as we cried together, the story my father told me of how he painted the children we'll never see age.

He had gotten pictures of Peter, Robert, and I as children, which he studied alongside images of Nicholas, Sophia, and Alexander that he had blown up into huge dimensions.  He began the painting with Bobby, because he said that he could see Bobby with his eyes closed.  And then, one by one, Nicholas, Sophia, and Alexander came to him.  He described it as a spiritual experience.  They would direct his hand, he said.  When he made a mistake, they would tell him "that's not right" and he would repaint.  And then, when their image was complete, he said that he heard them tell him "That's me, PawPaw... You've painted me."  Even writing it now, I'm tearing up and have chills.

What he has given to us is a precious gift that words cannot express; but the gift that his grandchildren gave to him is one that there simple are not words for.  Finally, 3 years and 2 years, respectively, later, he was able to have a relationship with his grandchildren who have died.  I am so thankful for that.

And I am so touched by his expression of love for all of us.
Posted by Michele at 1:12 AM

This is such a beautiful gift. Thank you for sharing it with us. As I sat here reading this, I was overcome with emotion, happiness. What a wonderful thing your father is able to do. It's beautiful.

That sounds like an amazing experience for him, and it is such a beautiful gift to you :-)

I, too, got chills when I read that. What a blessing your father is. The painting is absolutely beautiful. You have been so blessed by God.

hi... i am reading your blog after such a long time. the last was when the babies came home for the first time...then, i conceived a baby. the loss of your other babies really affected me and the pain were so fresh everytime i visited your blog. so, i stopped visiting.

today, i am so happy to be here sharing your happiness while always remembering your babies in the heavans.

What an amazingly precious gift! Your father put such love and effort into creating something so very meaningful to your family. I also got chills as I read about the children "helping" him paint. What a gift to be able to transfer some of his love onto a canvas for others to enjoy.

Dang it Michele! Its 7 am in the morning and I'm just crying like a baby over here!! That is one of the most beautiful gifts I have ever seen.
My dad was an architech and about 5 years ago he gave Bobby and I plans for a house as a gift. I can't wait for one day when we are able to build in and live in his "gift" to us. He's passed away since then and so to have something so tangible as a reminder of his love. I'm so glad that you have the same thing now!
xoxox

I got goose bumps reading this, and seeing your Dad's portrait. Your Dad really has a gift, and what a wonderful gift he could give to you. It's so wonderful that your family never forgets all of your children. . . even the ones that are no longer on earth. Beautiful.

so wonderful. what an incredible gift and deep connection your father has to his family. xo

What a blessing he was given by God. The painting is incredible. There is no doubt in my mind that Nicholas, Sophia and Alexander looked exactly like that. I must say that he caputured Bobby perfectly! Your father is a wonderful painter and I love that he shared moments with his grandchildren.

You need a disclaimer so I dont read this stuff at work! I'm sobbing at my desk. It's beautiful. Amazing. Your dad's awesome.

Oh Michele . . . I burst into tears as I scrolled down to the painting, and soaked in your description of how you Dad imagines his grandchildren. The detail in his painting, right down to the holding of the candles in their tiny hands . . . OMG, my tears won't stop right now.

I've never been moved to tears by a painting before. Please share with your father that he evoked a great outpouring of emotion in those who have viewed his very personal painting.

Oh my, not sure how I am going to recollect myself for the rest of this very busy day?!

What talent your dad has! Wow, this painting is just amazing. What a beautiful gift to have.

Chils. Really. This is so touching. I believe in angels. And yours are beautiful!

Oh, this made me cry all over my keyboard. How exquisite. Your father sounds incredible.

What a phenomenal piece of work your Dad created. This touched MY heart. I am certain that you will cherish this for all time!

That is such a beautiful painting! Wow!! He did such a great job!