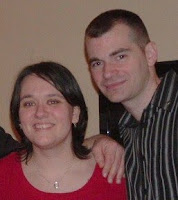 It's the day after Christmas... The year is nearly over... Less than a week until we turn the corner into 2010, but for now we are stuck looking it in the face...
It struck me just now that our tree is so special because of the ornaments on it. Peter and I have purchased ornaments for our tree since we've had our own tree to put up! From the Lenox "Holy Family" ornament we bought the first year he took me to Macy's in NYC (where I also met Santa!) to the one we bought this year of a pregnant Mary being led on a donkey by Joseph, these are some of the most treasured ornaments we have and each has a story. But none compare to the ones that are for our children. As I sat here and thought about them, I decided to post pictures and explain each one on the picture blog. Along with ornaments, I also posted the pictures from Christmas Eve and Christmas. I still have a few more Christmas ones (that other people took) that I'll update the posts with eventually.
For Christmas Eve, Peter and I shared remembrances of all our babies, from the first pregnancy we had in Oct 2000 that ended in an early miscarriage (but one that I didnt find out about until much later because we didnt have insurance and I hadnt had an ultrasound) and each baby thereafter. We talked about the joy of finding out we were pregnant that first time, we felt, with a boy named Peter. How he would be such a big boy now... How we bought that first, special "baby" ornament for him. We remembered the long journey that led us to Dr Lee and how we were blown away by the joyful news that we were expecting twins in late 2007. What a special Christmas! And even more special when our friends, Katie and John, gave us a special "baby's first Christmas" ornament for them. I remember hanging that ornament front and center on our tree, as we all discussed how different Christmas 2008 would be with twins playing in paper. We talked about ordering their two birth ornaments in Feb 2008, still full of grief, but wanting that tangible heart to remind us- and everyone who saw our tree- of the babies that we had held and loved... the babies we would miss forever. We remembered little Zoe, whom we conceived and held inside for only a few weeks... A little girl that was due on her big sister, Sophia's, birthday... A little girl that we felt and were so thrilled to learn had come to be in my womb, only to leave us so suddenly, paving the way for her little brother. We talked about Alexander, how he loved to kick... How we had planned on showing off his nursery the day after Thanksgiving, when we trimmed our tree for his first (in-utero) Christmas and Nick & Sophie's first Christmas on the outside. How, instead, we were ordering his birth ornament mere days after he was born and paying for overnight shipping so that it could be here. How we forced ourselves to make the house festive, as to not make his first Christmas dark and dreary, even as we were crushed inside. We smiled as we remembered baby Dimitri, a little spark in our broken hearts, but a baby that didnt implant, giving us only days until he joined his older siblings in heaven. And then, as they stirred across the room from us, we marveled at Bobby and Maya, born 3 months early but growing and developing on target and making this Christmas brighter by their laughter and smiles. We remembered their birth ornaments arriving in the mail, getting their "first Christmas" outfits, and we talked about dressing them up for church, Maya in 2 new outfits and Bobby in outfits made with love for his daddy and uncle, thirty plus years ago. Our hearts are full. Our hearts are broken. Our hearts beat so that our children go on... So that we do, too.
Christmas Eve evening, we went to my in-laws for a Puerto Rican style meal with stuffed pork, Spanish rice, and sweet plantains. I made brownies and pineapple upside down cake for dessert. Most of us continued our evening at Christmas Eve Mass, where we were able to connect with dear friends and celebrate that night, so many years ago, when a pregnant woman gave birth, alone save her betrothed, in a dirty stable. We dressed our children in their finery to celebrate her son, wrapped in rags, with only soft straw for his bed. 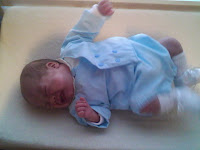 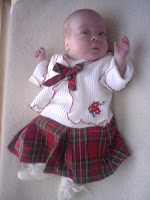 Christmas morning, we woke at 5:30 so that we could get the kids fed and ready for Christmas Mass, which I cantored. Bobby had worn the suit Peter was Christened in for Christmas Eve, so we put him in his Uncle Robert's suit for Christmas, while our little princess was decked out in a red dress (and her Uncle Robert's shoes!). As they had on the Eve, they were perfect during church. My MIL told me that every time I started to sing, Maya would look around for me. It was so hard to spend that hour not holding them, but I was glad to get back into serving. Starting in March, I'll be back on that schedule (and in January, I actually go back on the Sacristan schedule); Peter will begin as an Extraordinary Minister of Holy Communion and as a lector in January as well. But, I digress... Christmas Mass was lovely and the kids were spectacular. 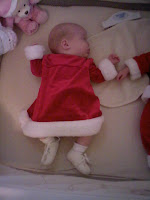 Folks came to our place for presents and brunch. In addition to crudite, cheese, and fruit, I made a crab eggs benedict (using homemade crab cakes in lieu of Canadian bacon). They were a hit! (Or maybe it was the mimosas that made it so...) ;) The kids were spoiled with gifts from relatives, friends, and bloggers- you guys are too much!!! Thank you so much for your generosity. (For those who sent them money, we have decided to not use that on "baby products" but rather to start savings accounts for them, so you are contributing to their college educations!) They received many clothes, toys, and we are so thankful to be surrounded with such love for them. That, truly, is the most important gift they can receive.
We spent the afternoon just lounging around and then headed to Peter's aunt's home for a traditional Christmas dinner. The kids (in yet another outfit!), were in "Baby's First Christmas" outfits, courtesy of Aunt Ann and Uncle Michael, our dear friends (who were married on Halloween and our presently on honeymoon!!!).

Those outfits were not only warm but pretty darn cute for photo ops!
We finally got them home around 10pm and just puttered around until we put them in their Christmas sleepers (thank you to Great-Aunt Amy in Guam!), fed them, and got them off to bed, somewhere in the vicinity of 2am... That probably explains why I am still in my pajamas and havent gotten much done, save drinking on a pot of coffee... 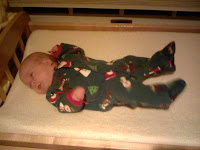 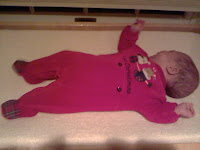 ***
Looking back over the last 2 years, I am reminded of my many blessings, even in heartache. As 2009 comes to a close and we begin a new decade, I am hopeful for many things... health, happiness, love. I hope that for all of you, as well. May you all be touched by THE Christmas Miracle as you (hopefully) find miracles of your own this season. And may 2009 end peacefully and bring us all much joy in 2010.
Posted by Michele at 4:14 PM

Wonderful post Michele, I love all the information you shared, felt like I was there with you. Love all the pictures and the photos of all the ornaments. Sounds like a few days of beautifully made memories. God Bless.

The kids just look adorable! I love the stories behind all of the ornaments, and am so glad that you had such a full holiday.

I love that you have those ornaments! The pictures of Bobby and Maya are just precious.

My Matthew has the same Christmas pajamas as Bobby (although in a larger size!). Too cute!!! Merry Christmas!

Love the pictures and Colby had the same pjs as Bobby too! :) Guess they were the popular ones. :) Glad you had such a great Christmas. May 2010 bring your family NOTHING but HAPPINESS!

Thank you for giving us a window into your world, Michele. Every single one of your babies are absolutely precious.

Thank you for a wonderful post. I'm hoping we get to meet you some day. Maybe at that "inside play area" close by. Maybe we will be able to share some times watching Maya and Bobby crawling around in there. That would be wonderful. (I'm missing that age, can you tell?)
Praying your New Year is full of wonderful days and memories.

I loved looking at all of the photos you posted. Each ornament is so beautiful and I loved Bobby and Maya's Christmas Eve and Christmas Day photos. After reading your memories of each of your children I spent some time re-reading each of their birth stories. Each one is so moving. I am so glad you got to spend time with each of your children. I hope you both had a wonderful Christmas, and I pray that 2010 is full of blessings and joy for you.

I didn't cheat this time and read the other comments first. With that said, Bobby is Peter's mini me and http://4.bp.blogspot.com/_AKA9gT2X2pc/SzUQpV-nJjI/AAAAAAAACNM/oiViyVe-zr0/s1600-h/Maya122509a.jpg this picture made me thing of the caption this picture thing that McMama does and first thing that came to mind is, "Where is that Mistle toe". Hugs and Merry Christmas (late I know). xoxo, Kandi

Oh also, when I saw your two's picture I thought you were doing a before and after picture. You look so young again. The Sad is drifting off your beautiful smiley faces. I love it. xoxo, Kandi Ann

just stumbled on your blog. Congratulations on your beautiful babies you sure deserve them. What a hard time you've had. Such loss you've had to get where you're at. You are a testimony to faith and endurance.

Michele, the ornaments are beautiful and the babies are so cute. It sounds like you had a beautiful Christmas.

Love Maya's little plaid skirt!
Here's to 2010 full of joy. All of your babies are blessings. They are working through you to reach tons of people.