We had our second run in the big boy/big girl bathtub! Because we didnt do bathtime last night, I bathed the kids this afternoon prior to their 4pm feeding. Maya was first because she was the most awake. 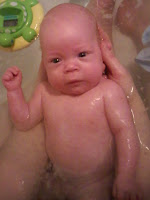 What a cute face! Little Miss Maya had no tears (and even a few smiles!) during her tubbie time.
Bobby was second and, although he didnt love it as much as Maya, we had no tears and, by the end, I think he may have actually enjoyed the water!

***
We've been adding rice cereal to some of their bottles to help with the reflux. For a few days, I added it to every single one, but I'm not comfortable with that. For one thing, big boy will eat everything he's offered, which means more calories than he needs; for Maya, she would only drink about 2/3 of her rice bottles (so 2-2.5oz versus 3.5 ounces of a formula only bottle), so she was losing calories. We tried it for a few days and are opting to just do it at night before bed and the wake up (or first morning if they sleep all night) bottles. That way, it doesnt impact how much they eat during the day. I also picked up some oatmeal cereal, but dont plan on introducing that until 5-6 months.
Last night, I bought some stage 1 baby food that, according to the label, is for four to six months. I plan on making baby food eventually, but since it was on a killer sale at the market and has no preservatives, etc, thought I'd give it a shot. But, thinking about it, even though the twins turn 16 weeks old on Thursday (I know... 16 weeks... freaking crazy), I'm not really keen on introducing it yet. I dont know... They are showing about half of the developmental cues for eating solids... I think I want to wait a little while longer. I dont know... Thoughts? Tummies arent equipped for solids until 4 months on the early end. Rice cereal was given in the NICU to preemies to help with reflux and I was told that babies can digest that relatively easily; Bobby and Maya havent had any issues, which is nice. But I'm not sure that I want to risk them eating other stuff yet.
On Christmas, they were both trying to attack our brunch plates so (scandal!!!) we dipped our pinkies in A VERY LITTLE BIT of egg yolk (they were poached) and put it to their tongues. Maya seemed disinterested but Bobby- OH BOY!!! His eyes got wide and he lunged toward my plate! It was comical. Poor kid wants food so bad he can taste it! Alas... No food for him for another few weeks at best...
***
We did our 2010 budget today. Thank God we are okay with me staying at home. What a huge relief that is. There is so much to worry about but, as long as we live within our means, we should be okay financially. It's been a long road to this point and I am so thankful.
***
Bought my Christmas cards for next year. I'm a sucker for 50% off sales. :) And, because I'm crazy like that, I've already signed enough for next year's mailing list... They just need to be addressed (which I wont do until next Thanksgiving...) I know... I'm a freak...
***
Well, my house is a wreck and the grown ups need dinner. I've got a lot of stuff floating in my head, but that is for another post...
4 more days until 2009 is a thing of the past...
Posted by Michele at 7:23 PM

I know what you mean about a 2010 budget. We both are going to have to adjust to one income and the loss of employer-paid benefits soon. John is self-employed so health insurance is going to be quite pricey for us and 4 babies. Yikes.

Glad Bobby and Maya both enjoyed their baths. I don't have any advice on solid food, unfortunately, but I hope you find something that you're comfortable with!

16 weeks-- crazy!! When we met with the pedi we were told that we could begin offering food at 4-6 months corrected, not actual. (Setting us about 3 months behind the curve) Basically we were told not to rush it if we could, so Colby has only had formula to this point. I'm so jealous that you get to stay home! At the very least I have to go back in April and make it until the end of the school year since I carry the insurance. I'd very much love to get to stay home. :) And as for the cards- you crack me up! :)

It's always great to hear that the little ones are doing so well. Here's to another wonderful year!

they both look so sweet....

we tried rice cereal at 4 months b/c naomi's pediatrician said she was ready, and also that was around the time when she started having trouble eating her formula anyway. but, she didn't like the rice cereal. i waited until she was 5 months and tried again...she still didn't like it. so i thought, maybe she just doesn't like rice. i tried oatmeal cereal and then applesauce, and she loved them! it turns out she just doesn't like the rice cereal much (still doesn't). she loves most other foods though...only one we've tried that she still hates is peas.

good luck introducing them to solid foods whenever you do it! i don't know how the pedi. could tell naomi was ready so i would just go with whatever you feel is best and/or what their very-awesome-sounding doctor says.

thank you for telling me about how you didn't have to do anything special to their bottles when you added the rice. like you, i'd rather not add it b/c then she won't eat as much and i still think that the more formula, the better...right now in my mind, the solid foods are just a nice bonus, even though she's eating kind of a lot of them (3 meals per day, each one 2-4 oz. of solid foods).

What a sweet post, so glad you all enjoyed your holiday :)

Also, I'm just getting caught up and am so sorry to read about your friend Glenda. While I'm sure she wouldn't want to read my blog (she needs happy-ending stories right now!), please feel free to pass along my email address if she has any questions (littlebluebirdsfly at gmail dot com) or direct her to the forums at preeclampsia dot org - the ladies over there are amazing.

Thinking of you all.

Every baby is different. Some eat solids later some earlier. My 1st ate solids after the first week. He was downing 2 bottles at night. My 3rd had so many problems with keeping any type of formula down he ended up drinking apple juice (watered down) and cereal...adult size bowls!! He is a big guy (21 yrs. old next week)! I nursed the next 5. Katie started with mashed avocado. Be careful giving eggs to early.
Have a great day...you look great!

Forgot to say in the last post...they are sooooooo cute!!

I just love that they're such big eaters - that's so awesome! Bobby is going to just be eating everything!

I'm so glad that things are going well - and I pray that 2010 brings more amazing things for you!

Our ped had us wait until our daughter was 6 months adjusted age to start solids. That put her at 8 mos actual age because she was 31 weeks. Preemies have immature GI tracts. Since yours didn't have gi complications, it probably won't be a problem. It's something to be aware of though.

Love the tub pictures, so cute. The food is a big decision. So glad that you can be home with them, you know you have to, this is what it's all about. My prayers are with you always and may 2010 be a wonderful year for all of you.

Adorable pics of the kiddos. Gosh - They are getting so big!

How wonderful that you can continue to stay home. It must be such a relief to be able to stay with your babies. :-D

My twins had reflux as well. The rice cereal in the bottles didn't help much because we were breastfeeding, and the boys didn't want to take the bottle that much just to get the rice. My pediatrician gave us an acid reflux med to use twice a day and that helped... previcid maybe.. its been 2 years so I'm not sure. She also recommended napping them on their tummies if I was going to be in the same room. I just laid out a blanket on the living room rug, and let them nap away while I sat and watched movies and knitted. It really helped.
As for solid foods and making your own, I would recommend the book Super Baby Food. Also great groups on CM about making your own baby food. The best for us was smashed banana, sweet potato, and avocado. Easy to make, and inexpensive!
So happy to see your little ones so healthy and happy!

Tee hee. Bobby sounds just like Jess with his attacking of the plate.

We were advised to wean at actual age but had to be quite careful as J was still pretty small. However, she started tucking at about six months or so (so about two months adjusted) and she is still a fairly good eater. Especially puddings! But it so tricky at first, trying to balance the calories.

And I was weaned at four months! Look at the size of me now ;)

Glad that the budget lets you stay at home still. And you are one very organized lady with the Christmas cards. xo

Hi! I also have b/g twins, born on 8-29-09. We are going by their adjusted age for solids so since they were 2 months early we won't start for 2 more months as 4 months is the earliest I have heard to start solids. Thats just us though!

I stumbled here and lingered for a while when i realised you had gone through such a difficult time of loss before. I am so sorry for your loss.

The pictures of the babies in bath looked gorgeous. Lots of work and more JOY than anyone will know..!

I am so glad the babies are adusting to big bath time.

Such cute pics. Don't worry before long they'll be slashing water all over the bathroom and giggling.

I recommend waiting until the 4-6 mos adjusted age to start solids. I gave it to my twins (9 weeks early) at their true 5 month age and it was a disaster and disappointing. We had a stressful couple weeks then put it all away until their adjusted 5 mos. They took to it much much better and would have saved us much stress. Even though they are 4 mos, their little bodies are still developing according to their due date. Good luck and glad you spent a wonderful holiday with your babies!

thats too early to introduce solids.