So, Michael has, thus far, been the only child spared from the sickness.  Around 3am, Maya started throwing up.  As sad as the entire thing was, by that point, Bobby had been puke free for 2 hours and he got off the couch (where he had been since the last throw up session) and waited in the bathroom with Maya, then snuggled in bed with her.  Autism has many struggles; empathy in general and a fierce love for his twin sister are not among them.  When she went through her several hours of pukefest 2017, he was by her side.  And, when she was awake and just hanging out, he was snuggling with her.

Lucas crashed for the most part during the early morning hours, thank God.

Michael crawled into our bed and I snuggled him off and on from around 2am-5am, when I finally went to sleep.  He stayed with me until 9am; but no puking and he seems to be fine.  So yay for that.

Peter slept off and on with Bobby as he slept from 10pm-1pm, getting up whenever there was puke, then he was pretty much up the remainder of the night, with some dozing here and there.  I was on laundry and clean up duty, and laid down to snuggle Michael during the 2am time slot when he woke up, but didn't go to sleep until nearly 5.  That being said, I did get to sleep until nearly 11 this morning.  Michael was with me until 9am, and then my MIL took the three boys, who all were fine (YAY!) to her house.  Maya came into bed with me and we slept until 11am.  We went to the couch, where she put on football (a girl of my own heart) that was DVRed while I made her some soup that she didn't eat.  She's the first to have the stomach bug with a fever (102.2, poor thing).

Peter actually went into work this morning because he's the biggest trooper I know.  He came home around lunch time, brought me some Tom Yum soup (I love it always but when I'm pregnant, I could literally eat it all day, every day), picked up Lucas from his parents (Lucas is now asleep in his crib), and then snuggled Maya, who had been asking for him. 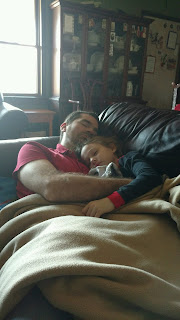 I hated to wake him up, but he had mentioned having stuff to do in the afternoon at work.  I know he's exhausted.  But he never fails to put on the "World's Best Dad" hat when the kids need him.  Whether it's taking a long lunch to meet us on our field trip and catching up with paperwork late into the night, or slipping into the lab on a weekend so that he can take a day off during the week to celebrate a milestone, or something like this where he builds coming home to give his sick little girl feel better cuddles, he's a dad first.  It's something that people don't always see about him if they don't know him, but it's one of the things that touches me most about who he is.  The world could fall down around him and he wouldn't care as long as he could take care of the kids.

So, three down, 1 still up.... three feeling good, 1 not so much.  But, thankfully, all Peter had was some early morning queasiness and all I've had was some long lasting nausea with no puking.  It could be worse.  And, in spite of a cumulative 20 pukes over the span of 12 hours, I can say that my living room, dining room, bathrooms, and kitchen all got some cleaned flooring, so that's a win, right? ;)