(I'm sorry I havent had a chance to recap the birthday party... I will... When I have time!)
We took Bobby and Maya for their developmental check up yesterday (for 12months chronological; they will get a 12 month adjusted in December).  This is the second time they have had a developmental check-up.  They went at 6 months old for the initial scoring, and, because they didnt qualify either by the NICU clinic or the county intermediate unit for any early-intervention services, we have not seen anyone since.  The NICU Developmental Clinic is a 2 part clinic.  For babies who need/qualify for services, it is free, ongoing therapy to help bring premature infants up to their chronological milestones over the course of the first 6 years of life.  For babies who dont qualify for services/need services, they see the kids every 6 months (except they see them on both their 12 mo chronological and 12mo adjusted birthdays) to garner statistics of how babies born at X gestation and taken care of by our hospital NICU (and the 2 sister NICUs of the health system) are doing.  It also allows the specialists to identify if delays occur later (typically within the first 2 years) so that babies who may not have needed services initially, can get the help they need should they need it.
On communication and verbal, Bobby and Maya scored 14-16 months!!!!!!!!!  On all others, they averaged 12 months (they score them in ranges and both ranged 8mo-12mo.  For example, because Maya is not really interested in walking around, she scored 8-9 months for her gross motor skills, but because she was very interested and intrigued by every little object and picking them up, she scored 11-12months for her fine motor skills; Bobby was the reverse, as he wanted to do nothing but pull himself up and walk around, so his gross were 11-12mo and his fine, since he really could have cared less about picking up objects if he could try and walk to another object!, were 8mo-9mo.)).  What is notable about this is that they normally do NOT score above their adjusted, neurological age (which, for them, is 9mo).  We could not be more happy!
The therapists were very interested in the Montessori homeschooling we are doing, and I was able to share some information with them, which I'm hoping can be useful for other parents.  There is a lot available online, and there are some very good books out there.  I've already packed a lot of my materials, but I know I have some other things I want to give them when we go back in December for the 12mo adjusted check-up.
They also had their 12mo checkup at their ped, and Bobby weighs 23lb10oz, was 31in long, and his head circum was off the chart for his age, LOL (he has Daddy's noggin).  Maya was 7lbs lighter at 16lb10oz and (I think) 27 or 29 inches (the card is in my purse...).  Both are growing with the curve (even though Maya is at the bottom of the chart), but the doctor was very happy.  She thinks Maya just may be petite, and says she has full term babies who are her size, so not to worry as long as she is staying on her growth curve, which she is.  Bobby is in 12mo-18mo clothes, and Maya is 9mo-12mo, so they are both growing well!  (They are viewed on their chronological age chart, not their adjusted chart.  If their ages were adjusted to 9mo, Maya is at the top and Bobby is off.  Since size was never a problem and the kids were meeting their chronological milestones, our pediatrician has never adjusted their age.)  They received the MMR vaccine, which they both hated.  Peter doesnt normally see the vaccinations, as he's usually at work, and I think it just broke his heart to watch them cry for a solid 5 minutes because it hurt.  They go back next week for the Varicella vaccine. Some of you may know that we had initially opted to not do the Chicken Pox vaccine; we changed our minds after we realized that some of the folks closest to them couldnt receive the Shingles vaccine because of the risk of exposing the kids.  After researching the vaccine some more, while it still wasnt on a "Yes, we think they NEED this", we opted to give it to them, as a public health issue (their public, not necessarily the public at large).  However, we did decide to not give it in combination with the MMR shot.  They go back at 14mo and 15mo for their 2 flu shots.  Fun times...  After no shots for months, I dont think the kids are going to like us very much this fall...
For the last few weeks, the kids have been changing their schedule.  I have a post up at the homeschooling blog that talks about their new schedule.  Life is ever-changing... In a good way. :)
I promise... Birthday pictures (and videos!) soon, but I will leave you with a few of my favorites... 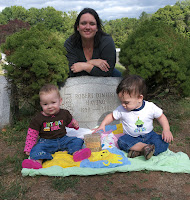 Maya touching the ocean for the 1st time

Bobby touching the ocean for the 1st time

What a couple of cuties! I'm glad they are doing so well!!

Wow 12 months! Happy Belated Birthday! The pictures are great. I just love the ones on the beach.

They are so adorable, Michelle! I started a new blog if you want to follow! http://lovemarriageandchildren.blogspot.com/2010/09/new-blog-and-promise.html

that is wonderful to hear they are doing so well!!

naomi was born at 37w1d which is considered to be full term...she was only about a pound heavier than, and about the same height as, Maya at her 12 month checkup! just want to reassure you, not that you needed it!

can't wait to read about some of the homeschooling stuff.

Your kids are amazing as always! They always encourage me about our babies, too, since they were born at basically the same gestation!

E wasn't born early at all, and he's definitely a bit behind on the gross motor skills.. but fine motor skills and verbal... woooooooo! He's zooming! It supports Jen's idea that babies tend toward some or the others.

The babies are SOO cute, and you are so together with your mothering! Great job!

I'm overjoyed that they are doing so well. It brings tears to my eyes. A friend of mine told me that whenever I talk about them or show pictures she gets this great feeling that they are living proof that miracles happen! They make her happy and she doesnt even know them!

Sorry I haven't been around much. I think of you and your family often.