The weather is a few days shy of the astronomical autumnal equinox, but that is okay with me! I love fall! From one of my favorite websites: "The seasons of the year are caused by the 23.5° tilt of the earth's axis. Because the earth is rotating like a top or gyroscope, it points in a fixed direction continuously -- towards a point in space near the North Star. But the earth is also revolving around the sun. During half of the year, the southern hemisphere is more exposed to the sun than is the northern hemisphere. During the rest of the year, the reverse is true. At noontime in the Northern Hemisphere the sun appears high in the sky during summertime and low in the sky during winter. It is highest at the summer solstice (about June-21) and lowest at the winter solstice (about December-21). The half-way points in the year are called the equinoxes. It is time of the year when the sun rises exactly in the east, travels through the sky for 12 hours, and sets exactly in the west. Everywhere on earth experiences close to 12 hours of daylight, and 12 hours of nighttime. " This year, fall officially begins on 9/22 at 11:44am (eastern time).

We are gearing up for vacation! Peter took all of next week off and I only have to work a few hours during the week (payroll and scheduling waits for no one!) and then I have a meeting on Friday. But, otherwise, vacation! We are visiting our favorite seaside town, Spring Lake, and are looking forward to another lovely B&B adventure!

The pregnancy is going well thus far. Still way more CM than I'd like to admit (TMI!) but going well. I have twinges that last less than 5 seconds, which, of course because I'm paranoid, worry the hell out of me, but are normal; I also get a quick pain when I sneeze, which is disturbing. But otherwise, we seem to be okay. We have our first OB appointment on Monday, 9/22- way to welcome in fall! Hopefully, I have a positive picture to post! :-)

Tomorrow we are 8 weeks pregnant and week 9 begins... I can't believe we're almost 1/3 of the way done. If I don't look at it in percentages, I start to freak out (because 8 sounds so small but 20% sounds not so bad). It's amazing to see what an 8 week old baby in-utero looks like! 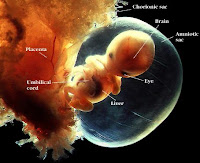 Fingers crossed for a good doctor's visit on Monday!

So lovely. Hi I came across your name from another blog. Just wanted to say "hi", and I'm Kenya at http://babybevans.blogspot.com/