It's been an interesting week.  Hard to believe, Michael is one week old!  This time on the 2nd, I was snuggling this little guy for the first time. :)

So, as I mentioned in my 36w5d post, I was contracting from Monday night into Tuesday morning.  I called Dr. B. and was told to go to the hospital for monitoring.  Peter dropped Bobby and Maya at their first day of camp, we arranged for their grandparents to pick them up, and then we headed out for the forty-five minute drive to the hospital.  I had contractions off and on, but nothing too awful.  We arrived and were instructed to go to APU (instead of L&D), where I changed into a gown and was hooked up to contraction and heartbeat monitors, as well as a cycling blood pressure cuff.  We got there around 10am and, as it closed in on 11am, I felt pretty confident I'd be going home.  I wasn't feeling contractions anymore and things seemed to have settled.  I told Peter that I was fine, to go and get the kids from school, and then, but the time he came back, I was sure I'd be ready to go.

I overheard a nurse in the hallway mention "507" going into the OR.  507?  Wasn't that my room?  Before I knew it, several nurses and Dr. A., Dr. B's new partner, were in the room and I was told I was next in the OR for delivery and to call Peter back (who, thankfully, hadn't left the building yet).  I called Peter and we were signing forms and getting squared away.   Not only was my blood pressure through the roof, but I was contracting every 3 minutes,  even though I didn't feel the majority of them.  Dr. Bailey had been called and he felt it was safest to deliver us then.

I have to admit, I was pretty excited when the anesthesiologist came in; he was the same doctor who did my spinal for Bobby and Maya's delivery and he has a reputation for being the best in the hospital.  Since I'm allergic to morphine (I puke, nothing else), and since morphine is the standard for C-section deliveries, he mixed a nice little cocktail to counteract the effects (which, thank God, worked and this time I did not puke).

So, into the OR by 12:15, where Dr. B. met us, and it was go time.  I had a combo spinal/epi, in the event the scar tissue was worse than they anticipated and needed longer to work.  Peter came in around a quarter of one, and the surgery commenced.  I actually didn't have a lot of scar tissue, although based on Michael's placement, Dr. B. did have to make my incision slightly longer (it's still a horizontal, bikini line cut, but it's about an inch longer than the original 4" scar.  At 12:50pm, a screaming Michael Dimitri Haytko entered this world.
Dr. Bailey actually said "I think this kid may be an eight pounder!" and I thought I was dreaming.  As they carried him from womb to warming table, he peed all over the floor and then peed again on the nurse. :)  He weighed in a 7lbs 5oz and was 20.5" long.  His APGAR was a 9.  Peter brought him over to me right away and there was nothing sweeter than feeling his sweet little face against mine, both of us tearstained, both of us calmed by the presence of the other.

While Dr. B. stitched me up, Michael (followed by Peter) went to the nursery to get his first full assessment and, boo hoo, a bath (I love new baby smell) :).  I went to recovery until I could feel my feet and then was taken to the postpartum area.  I'd been in my room mere minutes when my beautiful son was brought in and our rooming in began.

What a new experience- having my baby with me.  Peter gave him to me and immediately, he latched on and began to nurse.  Again, a new experience and one that brought me to tears.  The initial pictures we have of those moments are pretty rough... I look awful because I can barely smile through my tears.  I was put on a magnesium sulfate drip in the event my blood pressure issue was a legitimate one (and not a conditional issue) and, honestly, I must be one of the few people for whom mag does nothing.  I felt a little woozy when it first hit and then nothing.  I was tired already and it didn't really add much to the pie.  (Add to it, that somehow the IV became disconnected from the bag and my pressures remained stable, and everyone pretty much agreed the blood pressure issue wasn't really an issue after all).

﻿ That afternoon, Peter's parents brought Bobby and Maya to the hospital to meet their baby brother!  My friend and photographer, Erica, met us and got some great shots.

When they left, Sarah and her boyfriend visited, and then Peter came back for the night, after the kids went to bed, since (due to the mag, I couldn't have Michael room in with me if I was there alone until it was turned off the next day).  Peter spent the night and, the next day, went back to get the kids ready to see their grandparents (who are real troopers... couldn't have done this with the kids without them).

Michael and I were in the hospital until Friday with no real issues, save his blood sugar which was on the low side of normal and required heel sticks prior to eating to make sure it stabilized (which it did).  He was nursing, however, after a low stick, I was asked to supplement with formula until his pancreas started working better and he could handle regulating his sugars.  (I wasn't pumping at the time, so supplementing with breastmilk wasn't possible).  I began pumping that day and we gave him 10-15ml of formula post every feeding.  This did the trick and, once my breasts were producing (which, funny enough, happened way sooner than I thought due to the C-section; I was pumping a decent supplementation by Thursday), we started giving milk.  He was great, though; perfect latch and good breastfeeding, but no issue with the bottle either.  It was a sigh of relief to know that, regardless of how we feed him, he's able to do it like a rockstar.  (Doesn't seem like a big deal, but after the preemie rollercoaster, this is huge for us.)


During our stay, I felt like a famous person.  The head of neonatology and one of our NICU nurses came to visit, to offer their congratulations.  Former nurses from our APU days with Bobby and Maya popped in to say hello and see the baby.  It really felt like extended family, and I am still so grateful to the love and care they showed us and Bobby & Maya.  To have them celebrate Michael with us was just wonderful.

By the 5th, we were told that we were going home- together!  The only delay was that Michael's bilirubin test came back at 13.9; we were told to go to the lab the next day (Saturday) to have a retest and to follow up with our pediatrician.  With that, we loaded our new little guy in his carseat and started the journey home!
The first night home was really good.  We were all tired, but Bobby and Maya love their brother, and it is evident that we are all (especially Miss Maya) smitten. :)  And what's not to love... He is quite the cutie!  And so laid back!
We took him to the lab on Saturday and had his blood rechecked and, sadly, his bilirubin had increased to 19.4.  (21 is the "treat immediately" stage and 25 is the "brain damage" stage.)  Our pediatrician told us to go to the local hospital to start phototherapy immediately, and to check in since we'd be there overnight.  While this was a hit to my gut, no one took it harder than Maya, who begged us not to go.  I think the 4 days in the hospital were enough for her, and to now take her baby brother away from her was rough.  I'm glad we were home the one night, though, for the sake of the kids.  They needed that.  And, if it was this scenario or my discharge and him left behind, I'd take this one.  Any day.  So, off we went and, by dinnertime, we were checked into the Pediatrics wing of a different hospital (but with just a great of staff- really liked them) and Michael was under the lights.  His retest at the hospital was 19.1, and the on-call pediatrician felt like he was actually leveled off and dropping.  (Peak day is day 5 for a baby of his gestational age.)  He was pooping and eating, and she felt like a single 12 hours under the lights would be enough to get this show on the road.
The next morning, he was tested again and the lights were turned off.  He came in at 14.5, which was around what they were hoping for, and we were cleared for discharge.  Peter took the kids to Mass and then came out and picked us up.  And we were off... again!
He had his first pediatrician appointment yesterday and we had to have him rechecked, to make sure the numbers weren't going up and, thankfully, we were still in the 14s, so we are considered A-OK.  No more heel sticks, no more tests.  We  go back in a week for a weight check (every scale was giving us something different, but using our ped's scale, which will be the baseline from now on, he was down to 6lbs 8oz from birthweight... the other scales all had him at higher and, since he's been eating and eating and eating... including supplementing with expressed milk and some formula if he's still hungry and I'm dry, plus TONS of dirty and wet diapers, I have no fear that he is eating). Then, we are back in a month for his first well-baby visit.

So, all in all, it's been a busy week and, honestly, I need a nap.... Which is where I'm going now!  Erica will be doing his newborn pics soon, so I'll have something new to share, but for now, I'll leave you with this momento of Michael and I's journey from womb to room. :) 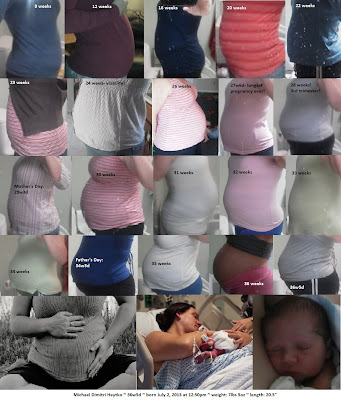 We're so happy for all of you! Can't wait to meet our newest cousin!

SO glad it went so well! Enjoy those first few weeks...and try to get some rest!

Congratulations! Beautiful story, beautiful baby, and beautiful family. I'm so happy for you, my heart is bursting. Enjoy this special time with your new little miracle.

I'm soooo soooo happy for you all, what a cutey he is! Love, Fran

Such wonderful news...that is as close to perfect as a birth story can get. So glad sweet Michael is doing well.

Such wonderful news to read! Congratulations!!

Congratulations!!! Thank you for sharing your story. I got a TAC last year and hope to put it to good use soon ;)

just catching up to your news - CONGRATULATIONS!!!! So happy for you!!!

So glad he is here and how awesome to have time with him right away. I was in ICU after my son and didn't have that. Only a photo. With my daughter I was okay. Glad that all went well with the light and that you are all home together now. God Bless.