When I opened the door to grab the mail this morning, I noticed the box was adjar... It couldn't close because there was an envelope in it.  Pulling the yellow package from the mailbox, I couldn't help but smile when I saw the familiar, curly writing, and the "to:" markings: "Peter and Michele and the kids' newest sibling!"

KK is a friend I've had since middle school.  She's a gem and, although there were a few years in adulthood where we fell out of touch, we regularly email (or, now, facebook!), and keep up with what's going on in our lives.  She's a beautiful person- inside and out- and is a huge giftgiver.  If there is an ocassion to mark, rest assured that KK will mark it- on time (always!)- and never without thoughtfulness.  Even if she is just popping in for dinner as she travels the East Coast (she lives in the DC Metro area, so we dont see her all that often, but when she travels this way, she always checks to see if we are available), there is usually a well-thought about gift in hand.  I'd say it's a trademark of hers...  Along with her bubbly laugh and cheerful smile.

I haven't seen her, physically, in over a year.  She came by our old house in early 2010; I'd love to see her again and catch up, but, until we can letters and emails suffice.  She'll be in TN visiting family over the Blessingway, but hopefully we'll catch up over the summer.

But, the envelope... I opened it to find 4 adorable onesies and a pair of pants.  Grey and green, with a koala!  Very cute!  But the gift that had tears streaming down my face...  I opened a delicately wrapped box where KK had written "Michael Dimitri" and a heart.  A little Bible, with his name, Michael, and a cross monogramed across the front. 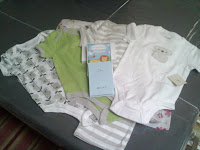 I've asked people to refrain on bringing gifts to the Blessingway.  It's not that it's more of a spiritual gathering than a 'baby shower' type thing; that's true, as well.  But part of it is that, since we don't know what the future holds and, to be safe, we are trying to prepare ourselves for the reality that his birthmother may change her mind, we didn't want to have to worry about what now???  When people have asked, we've explained, and everyone has understood.  It isn't a matter of doubt, mind you; just that we don't know our role on this journey yet...  We have so much in the event that he does come home to us- the hope that we have in our hearts- and we understand that people want to share in our joy...  We've smiled and said "At the Christening!" to try and brush off the concerns of not having a baby gift at a baby function.

But KK... She knows better than to ask... I could pretty much guess she knows I'd (virtually) wave her away and tell her "At the Christening", so she didn't ask... And she knew that what she sent would be perfect.  Absolutely perfect.  Something to hold onto, no matter the result.  Something to cling to, in spite of the fear.  Something to trust in, and to place our hope in.

"In every thing by prayer and supplication with thanksgiving, let your requests be made known unto God. And the peace of God, which passethall understanding, shall keep your hearts and minds through Christ Jesus."   -Philippians 4:6-7

hey Michelle! I temporarily have a laptop so I can actually check in! What a sweet and thoughtful gift to get! I'm praying for a sucessful adoption outcome for you and your family. I can imagine it being almost as scary as carrying a baby yourself!

so i dorp off the face of the blogger world for 3 weeks, and here you all are! Adopting! Wow, how exciting! :) I had to go back and read everything. Welcome to this rollercoaster! Can't wait to see what the next few months bring to your family