We started out bathing the kids in a blue tub that Sarah bought for their baby shower.  Even though it said "infant/toddler", they blew through it and, by 7-8 months old, I was looking for something else.  Enter "The Duckie". 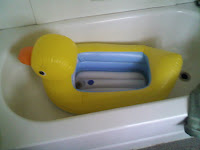 Big enough for one baby at a time, it was soft and the nose quacked!  The kids loved it and they've happily used it for the last few months.  But, sadly, all things come to an end and since Bobby cant sit at the back of it without crunching his knees, we've known it was time to move on.  I'm still not happy with them in the tub sans babygear, so I found some bath chairs.  And, best of all, they can have tubtime together. 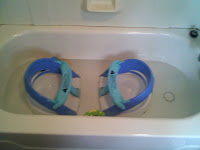 They arrived yesterday and, in spite of the Amazon write-up by the manufacturer that says suitable for up to 24months, the box says 10months!  They are huge (for example, Bobby had PLENTY of space to move around) so I dont know what 10 month olds the company had in mind, but I was a little worried using them.  No worries, though.  I tried them out this morning and they were not only stable, but the kids had a blast.  It took me some working to open them with the babies and, in fact, I had to have my MIL hold the kids while I figured out opening them from an overhead angle, but all in all, it was a good experience.

And Bobby and Maya had a great time.  So, without further ado, here is their first bath together! 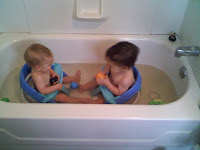 They were so busy laughing and talking that I couldn't get any good shots of them looking at me.

As for the duck?  He had a fatal accident with a pair of scissors and is now in the duckie grave of the trash bin.  He was so gross on the bottom that even cleaning him with bleach wipes didnt help and I wasnt giving a dirty duckie away!
Posted by Michele at 4:43 PM

Aw, I love that yellow duck! :) I bet they really like those chairs

May the rubber duckie RIP. Looks like they are going to have lots of fun bath time in those.

I have those same seats and they work great. I had to put the disks on the bottom because I have a textured tub, and recently one of them came off, but it's still secured with three of them. I sit them side by side however so they won't kick each other, lol.

Funny enough, our niece had the same baby tub, then ducky and now is sans bath gear at 13months... but there is only her lol!

I think those chairs are adorable!

I know!!! Those toddler tubs must be made for TINY toddlers!

I've been thinking of getting one of these chairs. Can you tell me which brand you got? I'm glad you used ita nd like it! Maybe we'll get it for him for Christmas. He LOVES the bath.

Mini Pez used that same duck. I loved it. I started using it as soon as she could sit up also.

They are so cute.

Those chairs are so awesome!!

The chairs are great!! That duck sure is cute though!

I am pretty sure that is the ducky tub we have. I can't wait to use it :)

I will miss the duck. Hopefully it reunited with the Wubanubs in wherever place that cute and functional baby items go after they have been outgrown, but are too "loved" to pass on to others.