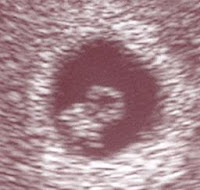 These are the first looks at our little sweetpea! They were taken on Friday, September 12th, around 9:15am.

On Thursday night, Peter said that he felt more boy than girl, but then on Friday, after the u/s and when I was getting dressed (it's a transvag u/s not a belly one), he hugged me and said "She's beautiful" and then said "Wow, I just called her a she!". In the car, he said maybe more girl than boy.... Not sure. So, for the present, I'm calling the baby Zoë, which is Greek for "life", with the caveat that,should the baby be a boy, I'm sorry I called him a girl's name! :-)

Everything looked "perfect" according to Dr. Lee, except one thing, which she said not to stress about and is just something to keep an eye on. The baby implanted low, right over my cervix. The placenta can either grow up (better scenario) or down, which would cover the cervix and make a C-section the only birth option. (Placenta previa) The implantation will have nothing to do with whether or not my cervix would open early again, although, because of an increased risk of puncturing the bag, etc., she said that, at present, I'm not not a good candidate for the cerclage procedure. She stressed talking to a perinatologist before asking for that type of surgery, since s/he would be best able to evaluate the scenario. She said the only thing scary about it is that, around weeks 32, there may be some spotting, and to let our OB know right away. Otherwise, she said it's textbook and that everything is fine. She was happy with the resting heartbeat of 123 and the measurement, and said to expect this little one (fingers crossed) in early May. (If we do continue with the placenta previa, we'll have a c-section at 36.5 weeks, which would make us more like early April.)

We have an appointment with Dr. Bailey on September 22nd, when we'll have another u/s and discuss this pregnancy with him. (So stay tuned for more pictures!)

We told our parents over the weekend. Peter's were ecstatic, my dad was very concerned, my mom and stepdad were thrilled. We've decided to postpone a general announcement to people for at least another 6 weeks or so, possibly longer. It's not that we dont want to tell the world, only that the world comes with a lot of advice and, frankly, I'm not sure that I can take that right now. It all feels so tenuous at best. I'm just praying and hoping that all works out.

Right now, I'm enjoying the pictures and the dreams! :-)
Posted by Michele at 3:07 PM