And they say every pregnancy is different...

With Nicholas and Sophia, the morning sickness was often and always: morning, noon, and night. If I wasn't puking, I was gagging. If I wasn't gagging, I was wishing I could gag because I felt so sick. Not so much with this pregnancy. I feel sick to my stomach every now and then, but I haven't gagged (save the one time, a few days post conception) or puked at all. Another huge change: hunger. From the very beginning with Nick and Sophie, I was starving. I would wake up at 1am and Peter would go downstairs to get me food. We eventually kept food by the bed because I was so hungry so often. I take medication that I have to take before eating (or 2 hours afterwards) and it was such a pain because I couldn't (or didn't want to) wait the three hours (2 hours after eating plus the hour post medication that I couldn't eat). What a pain that was! But we survived. This time, while I'm hungry (sometimes incessently it seems), it's nothing like that. I eat and I'm fine. I wait an hour and I'm still hungry (and, okay, maybe a little grumpy) but I'm still fine.

Of course, some things never change. My tatas are sore and constantly at attention. Sleeping on them is quickly drawing to a close, even accidentally! (It's time to whip the body pillow out!). Wearing a bra doesn't ease the soreness and, if Peter shifts onto them at night or tries to lay down on them when we're watching TV, watch out! They are on high alert! Another fun word of the hour: mucus. In health class, they never tell you the fun facts of mucus during pregnancy. And, because I'm on high alert of "any issues", I'm terrified that I'm bleeding when, in reality, it's just cervical discharge.
But, onto less nerve wracking things... Yesterday, I made my first OB appointment with Dr. Bailey. He wanted to see us next week, but with my RE appointment and 3 days of work horror (the library is going offline), it was impossible for such short notice (I feel horrible for writing that, like work is before our baby/babies... I totally dont feel that way AT ALL). So, I made an appointment for the 15th. I email Peter and, 2 hours later, he calls and says "I can do any day in September EXCEPT the 15th." So, I called the office back and they couldn't do anything else that week on the other two possible days for me (we have staff on vacation and I can't leave the library unstaffed). So, now our appointment is for the 22nd. Which is nice, because it will be the day before we leave for a mini-vacation to the shore (23rd-25th).
Another positive: I contacted our Bradley instructor. With Nicholas and Sophia, we had decided on the Bradley Method but never attended a class because we had signed up for classes that ran our third trimester. Because they are 12 weeks long, we decided to contact our instructor now, in order to find out her availability. Due to her family situation, she is no longer teaching formal classes, but agreed to take us, one-on-one, for the same cost. So, we'll be having private classes, probably beginning in October. I'm to email her back after the ultrasound, so we know how many we are expecting (and, I know, to make sure everything is alright). She's about an hour away (which, sadly, is the closest instructor to us), but has been so sweet. To be honest, I'm glad it won't be a class setting. I'm not sure how I'd handle a room full of pregnant people, who've, possibly, never endured a loss or infant death. Coming into class with 2 babies who died and a miscarriage... I think that's a lot of baggage. Lisa, our instructor, recommended a book, Birthing From Within, to help deal with the stress and fear of being pregnant this time around. I've ordered it from Harleysville Books, our local book store.
I can't believe we're 5w5d... Each day lasts forever, yet it goes by so quickly. Our book due dates at work are already October and, whenever I say that, it makes me think, my first trimester is over in October... I conceived Nick and Sophie in October; I'll have just started week 13 on their CD. And then, Nicholas's birthday is the last week of my 2nd trimester, week 27; Sophia's birthday is at the start of week 29. It's all a lot to process.
We've been taking pictures of my stomach for the pregnancy photobook. I started one with Nicholas and Sophia that began pre-pregnancy, covered pregnancy, and ends with pictures of them. I hope to do this for all our children. I've created the front page of the book already. 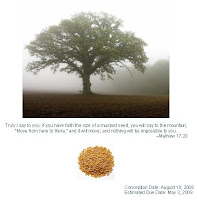