Icing on a God-Awful Cake

I had a playdate Monday with a friend.  Her daughter is 3 and the kids all had a lovely time playing.  Bobby and Maya are at the age where they can be trusted (somewhat) in their bedroom and playroom, so T and I actually sat in the living room, drank coffee, and chatted like grown-ups!  It was quite a new experience!

Part of our discussion was weight.  While we'd kept up on FB, we hadnt seen each other since I attended a mom's group (where we met), back when the kids were still in infant seats... That's quite a while.  We both have eating issues and have struggled with our weight.

But it got me to thinking...  Especially now that I'm training for the Marathon, I've gotten back into monitoring my food (to make sure I'm fueling enough for my running days and not overdoing it on my non-running days).  In the couple of weeks since this started, I'm down 8 pounds (don't applaud... My weight had gotten back up to 178 from 165 (over my birthday) when I took the second half of 2011 off).  As of this morning, I'm back down to 170 (with a goal, still, of 150 at some point, but a happy place of 155-160, I think).  But, in talking to her (and this is someone who really gets it, so there's no need for me to be), I'm embarrassed.

It still bothers me to have to admit that the problem wasn't Hashimoto's or PCOS (not that those helped at all), but that it was me.  My lack of self-control.  My denial of what was right in front of my face. My fault. 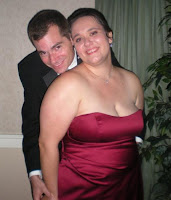 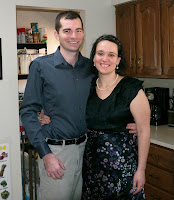 ﻿
﻿I look back on the photos, and I can't help but feel, truth be told, awful.  Like I threw years of my life away.  That it didnt have to be that way.

Peter and I were chatting after the day, and when I told him that I feel like a phoney because I still have the exact same issues as the obese-me had (I just control them better) and I havent overcome anything, he said something interesting.  He said that it isnt about feeling like you've overcome... That it really is about the day-by-day, the just getting through the issue for the day.  That it's alright if I still feel like I want to ravage the fridge for no good reason- because I dont.  Because I found out that the reason is deeper inside that I ever thought before.  It's not that Bobby and Maya are the only reason- it's that they showed me the real reason is to be a better me.  For them, yes, but for me, too.

He's a smart guy, this man I married.  As we inch closer to the 14th anniversary of our meeting that fateful night in 1998, I'm reminded over and over again of why I fell in love with him in that moment, and why our love has endured and grown over the years.  Even in my mopey moments, he still can shine a ray of sunshine.

I look back with guilt and regret, but when I see him look back at those pictures, he doesnt.  I see a fat girl- he sees the woman he loves (then and now).  When I complain that I look awful, he tells me that my eyes were sparkling or that my hair framed my face nicely.  And it isnt just because he's trying to find the icing on the (GOD AWFUL) cake... It's because he really sees it that way.

YES! You sound exactly like me! For me, food is a drug. I HAVE to take my addiction day to day. One foot in front of the other. Some days I win and some days I loose the fight. I just have to keep trying and so do you! As long as we never give up...

I really started to pay attention to when and why I was walking into my kitchen. I actually stopped and laughed one day when I realized that I was doing it when the baby cried, when my kids were shouting at each other, basically when I was most stressed. Now that I have figured out one (of the many)of my triggers I try and distract myself.

Keep up the awesome work!You really are such an inspiration!

I totally agree with Peter. It is about the choices made each day, not about the feelings that might be the same. I am having this in my spiritual life now and really having to remind myself that God can forgive and that I'm not a phony and that every day to grow closer to Him despite my issues is a struggle that I can have a victory over. I know it's not the same as your situation but I just wanted to say I can relate in a sense. And I think you are more heroic for fighting the battle everyday and winning, you know? If those issues vanished it would be easy (which, of course, would be nice, but then would be less of a challenge to rise to and be victorious against and grow with).

You look fabulous, but you always did because you have a radiant, generous glow about you. :)


Congratulations on picking the school for the kids! I am happy you found the right school for your family!!

Just a quick comment after looking at your before and after pics. You have lost a lot of weight, it almost does not look like you now. I think you look great now and you do not look like you need to lose more. Also, your marriage sounds solid..I am happy for you for that...so hard to come by nowadays with all the people I know.

You look wonderful dear. I'm happy you've gotten your body healthy. The mental part is a tougher struggle. I get it too. I sit here at a desk day after day & I just want to eat all day long. I've gotten to where I ask myself if I'm hungry. And most of the time I'm dont actually feel hungry but I want to eat more than anything. I have gotten to where I dont keep junk at my desk- i keep like Kashi bar so if my answer is yes, im hungry then I have something decent. It's still a struggle though.
Keeping the food journal does help too.
Good luck on your marathon training. I'm cheering you on!