In 25 days, my two pounders turn two!  How in the hell did that happen?

My radio silence gives me a lot of time to contemplate things with these two.  They truly make my days something to anticipate (and sometimes, something to fear!).  I cannot imagine, cannot fathom life without them.  Maya's chants of "MAMA!!!" whenever I come home from a run (and, at this point in my mileage and with the weather, I am sweaty AND nasty, and they dont seem to mind one bit, unlike Peter who hopes I wont sit on any of our cloth furniture until I've showered!!! LOL)...  Bobby's wrap-my-arms-around-your-legs-completely-and-barrel-you-over-to-the-floor kung fu death grip when he wants a hug and then slobbers me with perfect little boy kisses...  They are things I wouldnt dare trade.  When I look back on those early days...  The incubators, the IVs....  I dont know that I pictured them at two years old, talking to me, running to me, two insane daredevils who are the loves of my life.  I dont know that I pictured being a little over a month out from running my first half-marathon either!  How time changes things!

So... The half is approaching.  September 24th in Nashville.  I think the sign-ups are closed, but if you are in the area and want to support the ladies running (it's all women), then you should head downtown way too early in the morning!  My goal is less than 2.5 hours; if I could nail it in 2 hours, I'd be thrilled.  But, I have to get on a plane a few hours later and dont want to hurt myself.  I'm pretty excited, even though it will be 36 hours away from Bobby and Maya and I know that will be tough!

2nd birthday party... I had these adorable invitations made as postcards  (and, although it sounds extravagant, it was cheaper than buying a few and handwriting them). 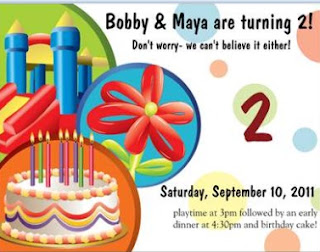 It'll be a good time.  Fun with friends and family.  Meeting some of our new neighbors (well, we've been hear almost a year, so I guess it's not really cool to say "new" even though they are new to us!) and making new friends.  I'm thinking I might make their cakes this year; we'll see.  I saw an adorable twin design that I liked. (http://www.coolest-birthday-cakes.com/coolest-sweet-pea-cake-4.html) 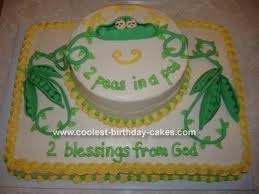 I figure the big cake would say "Happy 2nd Birthday" or something like that.  It looks like a lot of work, but... I dont know.  I think I'd like to attempt it.  We'll see how brave I feel once September 9th rolls around and I'm on the verge of their party!

Speaking of birthdays, Peter turned 33 last week.  On Wednesday, we had a date.  He took off work and we had brunch a favorite spot nearby then went to the beach.  His parents had the kids for the day, so it was just the two of us.  As he was playing in the surf, I was walking along the waves when these 3 kids (maybe 15-16 years old) walked by.  One of them cocks an eyebrow, smiles, and says "Hey".  One of his friends elbows him in the ribs and says "Dude, she's too old for you."  Wow.  Thanks.  It's not enough that I recognize that I could (technically) be your mother, but your buddies do as well and feel the need to verbalize it.  Funny enough, I dont obsess about age, but that mark stung!  (And made me laugh!!!)  On Friday, I made dinner and we had some friends and family over to celebrate.  He also gave me the "day off" on Sunday to have some girl time so he could have a daddy-day!  A gift that keeps on giving!

I finally made the lower level playroom into a playroom.  The kids LOVE to use it.  It's hysterical.  I say "Let's go downstairs" and they nearly plow me down to get to the door.  Moving some of the outdoor toys indoor was fun.  (The powerwash setting on the hose is NO JOKE).  Bringing down some of the living room stuff really opened up our living room too- it looks way bigger even though I only moved a few things!  But, they are having a blast (we are actually about to head down now!) 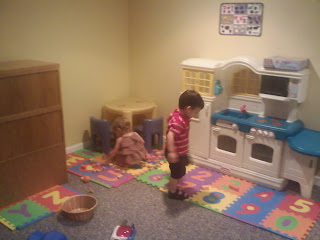 On that note, I'll leave you with a few pictures of our 23 month year old wonders. 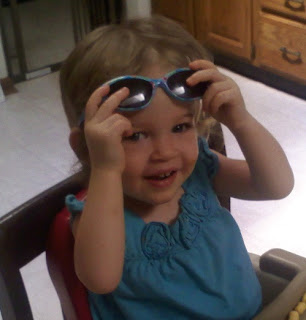 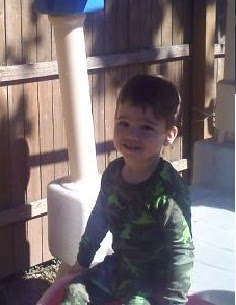 They are just too cute. And I can't believe they're almost 2! That's crazy. I had to laugh at your story about the kid telling the other she's too old for you. I had a guy tell me the other day that I 'had a great figure for my age.' Yeah, um...thanks.

Bobby looks more and more like you all the time.

First off, I think that it's awesome that a 15 or 16 year old boy would think you were hot enough to say hi!

I love your indoor playroom. I wish we had one. Sometimes I'm just desperate for a room that we can just play in and not have to share to live in as well!

Hope the rest of your week goes well!

Your little ones are so BEAUTIFUL!!!!

I am glad you are posting. I miss reading all of your posts. Your write so gracefully.

I love decorating cakes; I wish I lived closer, I'd help you. The one you posted is SO cute.

They look so grown up! Hope they have a wonderful birthday.

Awesome playroom! THey are both growing up so fast!

Hard to believe they are almost 2! I still remember when they were born.

Your play room looks awesome! It's giving me the motivation to do some stuff to our play area as well. :)

My, how time has gone by. I started following your blog at the end of 2008. The kids have sure gotten big and just too cute for words!
Good luck on your 1/2, you maintain an inspiration to me and I know you'll do fantastic!