It wasnt enough that Bobby crawled to his toy today.  (My kids hate to crawl; they'd rather practice walking instead).  But then, he did this. 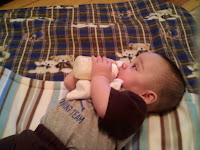 And, because he's his father's son, he decided to be "resourceful" (read: LAZY) and pull a pillow over because, let's face it people, holding a bottle is a lot of work! 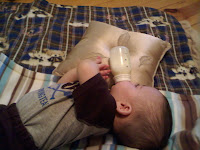 Lest Maya be left out, she decided to text her Daddy.  (Now, all I can figure out is that, when playing with my cell, which she loves, she somehow hit the text button, which I have on the desktop.  Once there, all the incoming texts were from Peter from an earlier conversation, so all she had to do was hit one.  Then, it's an open chat, so she just hit her hands to her heart's content until she finally landed on "send".  My kid isnt a prodigy in this regard, apparently...  At least she didnt call China!  (Dont laugh; had a friend that happened to!)
They're really growing up, aren't they?  I'm so not ready for this...
Posted by Michele at 11:21 AM

That is a sweet picture of Bobby.
He knows how to relax. Glad she didn't call China either. I may have told you this but when I was in school, many, many years ago they had us crawling in my reading class because they felt the poor readers didn't crawl enough.

Wow they are just getting so big! and cuter every day!

That is both so adorable!! I just can't believe they are already nearing toddler territory!

Yes,they are!
They are so cute!