I've made no secret of my eating disorder and weight struggles.  After the twins were born, I tried to rope in my issues and completed my first triathlon when they were 11 months old.  It took another month for me to choose to work on my eating disorder, but by the time they were 2 years old, I was in the best health of my life.  I think that, had my life stayed the same, I may have been able to continue on that journey easily (at least I like to think that) but life doesn't stay the same.  The only constant in change.

In 2011, I had my TAC placed and had a quick, 1 week recovery; in 2012, I ran my first marathon and was in the best shape I'd been in since high school.  I was a size 6 and carried a muscular 160 pounds on my 5'7 frame.  I felt great.  I looked great.  And then, I got pregnant.  Very unexpected and quite the shock.  I ran the entire pregnancy, completing my last race at 35 weeks.  Michael was born 2 weeks later.

I had put on about 30 pounds with his pregnancy, which wasn't considered problematic.  No problem... I was breastfeeding, I was running- I even ran the NYC marathon when he was 4 months old!  But the weight never came off, and that led me back down the dark spiral of disordered eating.  In spite of running, teaching fitness classes, and logging my diet, nothing seemed to help.  Everyone told me that breastfeeding would melt the pounds off but no... no melting.  And then, I got pregnant with Lucas.

Talk about being in shock and denial!  I still ran and taught 4 fitness classes a week, but by 28 weeks, I was exhausted all the time and by 30 weeks, I resigned from my teaching position and became a pregnant couch potato.  I had only lost 5 pounds of my Michael weight and then gained 20 more by the time Lucas made his 38 week appearance.

After Lucas, there was struggle.  A lot of it.  My eating habits went completely out of the window because I just felt like shit all of the time.  By the time he was 4 months old, I found myself across from a doctor saying that I just didn't know what the hell was going on.  My body was falling apart.  My joints ached.  I couldn't get out of bed in the mornings.  Peter literally had to get up to help me go to the bathroom in the middle of the night.  At 36 years old, I felt 96 and I just.couldnt.do.it.anymore.  Testing revealed the antibodies for RA, which, in conjunction with my Hashimoto's was the culprit in making me feel like death made over.  After talking to Peter about the current pharmaceutical options on the market, I opted to try 6 months of a GF/DF diet and see if I had any pain relief.  It took 3 months, but I finally felt better physically.  After 6 months, I was able to reintroduce sheep and goat dairy, and then (in limited amounts) raw cow (and now pasteurized also) dairy.  I'm still GF and, in spite of attempting two different reintroduction attempts, that doesn't seem in the cards for more without a huge increase in swollen joints, pain, and hives.  I'll pass on that.  Oh, and then I got pregnant again!

I've talked about my struggle with PPD post Lucas, so I won't rehash that, but suffice it to say, that didn't help with my eating disorder, and so, finding out I was pregnant with this baby back last fall, after having only lost about 10 pounds from my pregnancy with Lucas in spite of running and breastfeeding, continued the downward trend.  I would throw up after each run, so after the second month, I gave that up.  Thankfully, 20 weeks saw me able to run again and I've been able to knock out 2 miles at a time without feeling terrible.  For a marathoner, I think the mental issue of "only 2 miles" is the worst of it.  I'm finally just so happy to lace up again that I can beat down the negative voice.  With the running came the ability to start regulating and logging my food again, although it's so much harder.  Lest anyone think I'm trying to diet, it isn't about that. Eating disorders are a mental issue; I tend to self punish with food.  Feeling like a crappy parent today?  EAT.  Crappy wife?  EAT.  Crappy in general?  EAT.  Sad? Angry? Frustrated? Exhausted? EAT EAT EAT EAT. Logging my food, regardless of calories or anything else, is a visual representation of my humanity.  It causes me to see myself as a person worth caring about.  Didn't eat breakfast and it's 10am already?  Stop and eat something.  Already eaten lunch and only an hour has passed but you find yourself in the kitchen because homeschooling is frustrating?  Try a glass of water instead and reevaluate... You haven't drank enough (because the app shows that) and you might be dehydrated.  It sounds like a small thing, but in the midst of the disorder you can't see it when it's there.  And the simple activity of recording the data is a step for me; it's the therapy, the plan, the walk towards remission.

It's hard.  It's so damn hard sometimes.  But just as I looked at the twins when they were not yet one and noticed them watching me eat... picking up on those hidden cues and nuances....I see it now.  I look at my kids and know they are watching.  I know that disordered eating has a large environmental influence.  For children with autism, eating tends to be a sensory stim and, with Bobby being so much like me in other ways, I worry about him.  At 7 years old, he is a massive, 12 year old sized boy.  He is proportional for his height and weight, and is built like a solid linebacker.  But that is only part of the equation.  I don't want him (or any of the kids) to see my disordered food relationship and think that is normal.  For the other kids, they may question it; but I don't know that he would.  Especially if the stimulation of eating was a pleasure (which we all know it is).  I find that I struggle to take care of me for me but when it comes to trying to recover for my kids, it becomes a necessity.  I can't let them see me like this, not if it means they will emulate it.  They can see me struggle.  They can see me fight.  They can see me falter and fail- and get back up. But they can't see the demons win.  If that happens, then they may feel like that's an option.

Not for them.  And not, because of them, for me.

So, I will continue to struggle every damn day.  Every second, I will fight the romance of the food and the sugar and even, at times, the gluten which sounds nuts but man, drop that from your life and all of a sudden it's all you want.

I will continue to get up and take the 20 minutes or the 30 minutes and do some sort of physical activity, even on the days when I'm too tired because kids were up all night or I don't feel good or I' swamped with crap to do.

I will force myself to make the better food choices even when the kids can't see me because true strength is created, not when others are watching, but when we know that only we ourselves can see.

Christmas rolled around this year and, as most parents (and moms, I think, in particular) know, the whole gift giving aspect is more about your kids.  The tree was decorated, pretty packages were underneath the tree, and suddenly, one day, Maya appears with a little package she wrapped herself, complete with a construction paper card that she made.  I had no idea what she possibly could have done, seeing as Peter hadn't taken them shopping (and, in truth, since this new laptop I'm using was my gift from the kids, knowing that he wasn't taking them out for other gifts).  My mother-in-law told me that it was something Maya had asked her for, so I assumed it was some sort of heirloom but still... what in the world could it possibly be?

Come Christmas morning, I open this delicate card, slightly wrinkled from other presents being placed on top of it. 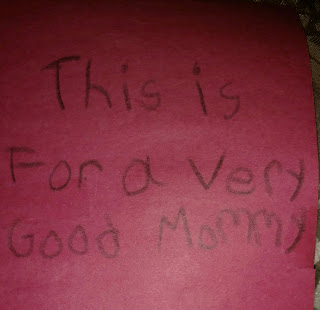 "For a very good mommy"... The last thing I feel most days is a "very good mommy".  But something my good friend, Typheni, recently shared with me, is that our kids don't remember the struggles, they remember our snuggles.  I think I need to take that to heart more. 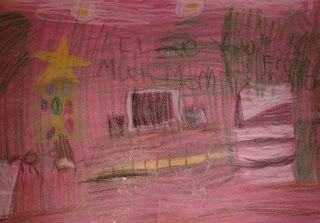 She drew our living room, complete with the tree and her gift underneath.  And what was the gift?

She gave me circa 1970s Star Wars action figures that were Peter and Robert's when they were kids: Han, Chewbacca, and Yoda.  Because they were my favorites.  I can't remember when I told her that... maybe it was when we did our Episode IV, V, and VI marathon for NYE 2015...  But somehow she took that to heart.  Later she told me that Yoga is smart, Chewbacca is strong, and Han is tough- "just like you, Mommy."

I keep them, along with the card, on my night table as an ever present reminder that not only can I do this, but I will.
Posted by Michele at 2:09 PM

Love, love, love this post. You are a great mom!