Where Is Our Humanity?

At the end of August, I posted the following on my Facebook page, in response to a photo and commentary I'd seen.
"We live in a country where immigration is a fairly large issue, with debates on both sides as to what is "right" and "moral". However, I'm always led back to one thought. Excluding those whose history actually lies within the country they reside (for example, my mother comes from tribal peoples in our country), the vast majority of the world immigrated somewhere... They displaced their families for better lives or religious freedom. They then displaced (and, in many cases ...discriminated against) the people they found in their "new" land. History is history; it can't be undone and, of course, in societies that are based on "law and order", there are methods for coming into countries as citizens. That being said, we are all human. People are fleeing places that have hardships that we cannot, in our "first world" even imagine. And, rather than trying to help them as fellow human beings, we would rather judge their language, their religion, their lack of legal status- anything to avoid looking at them as part of our body, as part of ourselves. Regardless of where people stand on immigration issues, we have to stand together as humanity. And this? This woman clinging to her baby in the middle of the raging sea while people look on and let her drown? This is not humanity."

The issues with refuges fleeing Africa and the Middle East wasn't even on my radar until I saw this article over the summer, in which a Greek soldier had single handedly saved nearly two dozen people after their boat was destroyed in the unforgiving sea.  I think I wrote some glib "wow, proud to say my kids share some of this hero's Greek heritage" on my Facebook link to the article.  I'd like to think that if we saw people dying in the water, trying to get to shore, Peter and I (and anyone we know, honestly) would jump in to help.  I mean, we're human; they are human.  Isn't that part of being part of the human race?

It's upsetting but what I saw today had my heart in my throat; I felt like I couldn't breathe, as though the air had been sucked out of the room.  The tears came and I couldn't stop them.  I scooped up Michael and just held him, holding him as tight as I could.    This photo is hard to see, but it is something we must see.

That child cant be much older than Michael.  His family, fleeing hell on earth, and then plummeted into the sea.  I can imagine that poor little boy, struggling against the waves, as his body was thrown back and forth, until he took his final water laden breath and succumbed to, at last, some sort of peace that was denied him in this life.  I am heartbroken.  I am so deeply troubled.  And I am angry. 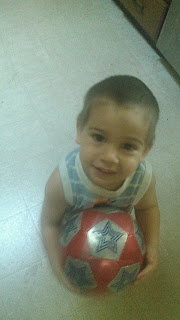 I see my son's face.  And I know that I would want- and pray behind measure- that someone would help my son if he was in need.

Where is the outrage?  Instead of helping these people who are fleeing things we dare not imagine, we have countries that are refusing to help them, that are leaving them to die in the water.  We have countries, in dire need themselves, doing more than their share to try and help.  What are we doing?  With the amount of money our governments will spend on war and weapons, are we so blind that we can't put our money where our morals should be?

The European refugee crisis is like something out of a horror movie.  While we might be on the other side of the world, the other side of a sea, or a country across the border, we are all humans.  We all bleed red.  We all have feelings and emotions and needs.  I refuse to believe that ignoring the waves of those seeking a better life will make it go away; I refuse to believe that we can ignore it.  Can you ignore the image of a mother clinging to her infant?  The image of that little boy, dead on a beach?

Can you, for a moment, imagine if it were you or your child?

There has to be something we, as a global people, can do.

Our Lady of Perpetual Help, pray for us.  Pray for them.  Hold those who flee their homelands under the mantle of your protection and pray for their peace and safety.
Posted by Michele at 5:10 PM