Breastfeeding week is coming to a close.

As a mother who has given children both milk and formula, I am often reminded that a fed, healthy baby is best. I couldn't nurse the twins due to their prematurity; I pumped until Mother Nature decided, at a mere 3 months, that I was done. The guilt was tremendous; I cannot put info words how broken I felt. First, my body failed the twins by delivering them in the second trimester. Then, it failed them by being unable to nourish them. ...I was grateful for the formula that did what I couldn't and, over time, I let go of the guilt and was grateful we could meet their needs another way. 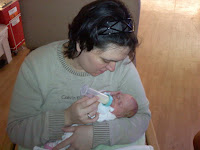 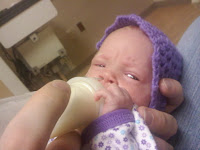 When Michael was born, barely term but safely here, and he latched right away, it was a dream come true. I had milk! He was nursing! We nursed for over 21 months, stopping only because it was too painful in this pregnancy and because he felt he could. He still nuzzles my chest from time to time, and I remember fondly those months together.

He was fed.
He was healthy.
He was alive.
He was loved.

Michael healed a lot of the hidden hurt that lingered because of breastfeeding.  He took away so much of the guilt I had for delivering babies early.  With Nicholas and Sophia, I desperately wanted to believe that it was a fluke.  That, because things had been good up until my labor, it was just one of those things people reassured me happened and that, the next time, we'd be fine.  With Alexander and the extra monitoring, I thought we'd be okay and then... it happened again and finally I had the diagnosis of cervical incompetence.  We were told how the next time would really be different... How a TVC and lots of bedrest would be the answer.  And, in a way it was; Bobby and Maya, while early, were born late enough that the NICU could help them.  It was sixteen weeks of pregnancy hell and nine weeks of NICU hell, but hey!  They made it!  They were the success story!  But I still felt the guilt; it was MY body that failed them, both in pregnancy and in the time after.

Getting the TAC was one of those things that we did as a preventative measure, not because we expected a Michael or Lucas in our future.  But that made such a difference and suddenly, things really were different.  Suddenly, I did have the opportunity to carry a baby to term.  My body did work.  It wasn't defective.  There had been a problem that was corrected and things were going to be alright.  It brought another guilt though... Those awful "what if" questions.  What if I'd investigated the issues that were common to "DES daughters" and learned that I had a very high risk of IC- could I have gotten a TAC before Nicholas and Sophia?  What if... What if I'd gotten a TAC after them, without knowing for sure that it was IC.  Would Alexander have been born term?  What if... What if I'd skipped the TVC altogether and gotten a TAC?  Would Bobby and Maya have been term (or at least close-to-term) twins who were able to skip (or have a much shorter) NICU stay and have been able to nurse?

So many questions.  No real answers.  And then I see an article like this one.

I strongly believe mother's should give milk whenever possible. We know that breast milk is a healthier food for babies.  Sometimes, however, that isn't possible, no matter how hard you try.  Stories like this one make me extremely thankful that we had the availability and means to feed when nature had other plans.  I won't question that again.
Posted by Michele at 5:30 AM

Have I ever told you that in the pics of Nicholas and Sophia on your blog, they appear to be praying?

I was able to breastfeed Figlia (though I really struggled) till almost 11 months, but with M it was a washed away affair from almost 6 weeks. My milk supply was just not up to it, and M stopped latching - preferring the bottle to mamma.

I too am glad to live in an era where options are available.