I'm packed and ready to go.  Come rain or shine, I'm running the Marine Corps Marathon.  (Want to keep up with me?  Check out the MCM page, where you can Track A Runner (just type in Haytko as the last name- I'm the only one), and get alerts via text, FB, or twitter. You can also You can even watch the MCM on Comcast Sportsnet.  I'm also having live FB posts autogenerated, so that should be interesting!)

We've prepped the kids that I'm leaving tomorrow "to go running" and will be back on Monday.  There have already been tears (and Bobby and Maya arent the only ones crying).  I'm going to miss them.  I hate leaving them.  And yet, I feel like this especially is something I need to do.

The kids I assistant coach cross country for are amazing.  Tuesday night was my last practice; they had a Thursday practice (but Peter and I went to the Whiskey Festival-AMAZING... More on that later) and then they have their finals on Sunday.  I wont be there, which makes me sad, but I'll be running with them (just a few hours away!) which makes me feel like there is a special kinship.  And these kids... They range from Kindergarten to 8th Grade, and they are amazing.  On Tuesday night, I was given some adorable handmade bracelets from the girls, flowers from the boys, and a huge posterboard that says "You Can Do It".  Let me be honest, I was nervous before but now?  Now, I can't let these kids down.  So yep, I guess I'd better find a way to do it! 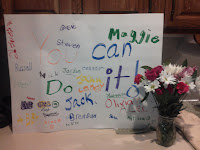 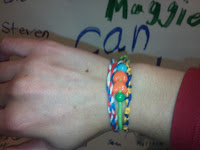 So now... My jewelry is in my jewelry box (with express orders of who gets what in case I don't make it home... Maya gets my mother's ring... Bobby gets my anniversary band... Peter keeps the alexandrite choker that I wear everyday and my wedding band...  The list goes on...)  Right now, I'm wearing what I'll wear to run in: my mother's wedding ring (I always take this with me on long runs... It's like my mom is there with me, cheering me on); the bracelets from my kids, which I've paired with my bracelet for Robert; and a necklace of Our Lady of Czestochowa.  You might think it's because I'm Catholic, but it's actually not.  Robert found the icon pendant on a playground as a child; when he passed away, Peter placed it with him in the coffin with his rosary and a cross. Before they closed the casket, Peter kept the cross and pendant.  He gave the Our Lady to me, years ago, when I started running again.  Back when I thought I'd never make it a mile (and when that mile was a struggle).  The necklace has come on some pretty long (and some pretty awful at times!) runs.  It's a symbol of Robert with me.  I treasure it.

I cried tonight as I wrote on my Team Lemon shirt; the back reads in loving memory of Robert Dimitri Haytko (1980-1987).  On the front, underneath the running lemon, I wrote "squeeze me", because I can't think of Robert without imagining him in one of his favorite shirts, with that smile that Bobby has.

It's a rough night tonight, full of so many emotions.  In a way, this race is so much for me, but at the same time, it's not.  It's for the long 25 years that it's been since that last Halloween that Robert spent with his family.  It's for the 32 year old man that he would be.  It's for the lasting impact he's had and the one I'm sure he'll continue to have.  It's for the hope that my children- that all children- will never battle the nightmare that he did, and that there will be a cure for the ones who are.  It's for Peter and my in-laws and my children... It is for me, but it's for so much more.

It's why I have to do it.  It's why failure isn't an option.  It's why, regardless of a hurricane, I will still be on that starting line in (gulp) 1 day and 16 hours.

My dad sent me a text this morning when I asked him for luck: "You don't need luck with you have raw talent."  I don't know so much about the raw talent, but I like that he's optimistic.  He's also the one who tells me time and time again that I don't know how to fail.

I guess I should picture him like Yoda: Do or Don't.  There is no try.

And really, in this situation, the only try I have is to try and remember that I'd rather be sore than sorry.

Think of me, peeps... I have a post for tomorrow, but otherwise wont be posting until after the race.  You can check my FB account for real-time updates (or so they tell me!), and I'll try to post by phone that I've survived. :)

Congrat's on finishing!!! So impressive. We moved to DC yesterday, and were out on the course today watching. We were out there cheering for you in spirit, although we didn't catch sight of you in person! It was such a nice community vibe where we were watching--hope that was true for the whole course!