Well, today was the day... Today was the day that I would have been 36 weeks pregnant, my cerclage would have been removed, and, in theory, our twins would have made their appearance. November 7th... It was day that I had played out in my mind so many times. A day that I'd hoped would arrive with a big belly. Instead, my belly is a flabby, stretchmarked canvas that birthed beautiful babies nearly 2 months ago...
***
Maya's extubation went so much better yesterday. Thank you so much for your prayers. At 11am, they did the procedure. She actually was breathing on her own but her oxygenation was in the 80s (instead of the normal 90s, although above 82 doesnt sound the alarm on the monitor), so the neonatologist opted to give her a room air cannula so that she didnt have to work so hard with a sore throat. This morning, he said he'd like to wean her off that this weekend since she doesnt need it for breathing support. They did an x-ray the other day, just to make sure it was her throat that was the culprit, and the CRNP told us that she has perfect lungs. (Which is something every preemie parent wants to hear in spades.)
It was wonderful to get the contraption off of her. As soon as the vent was removed, those beautiful eyes opened. And she reached for us and cried (and the sound is just as sad as the crying). We didnt love the nurse she had, who basically wanted to snug Maya up in a snugglie and hide her from the world, without touch or sound. (Look, lady, our daughter hasnt been held since Tuesday at 4:30am, and hasnt opened her eyes for more than 2 seconds since then either, and now you think it is best for her to not be loved on??? I think not.) This was seconded by her doctor who, when Peter asked, "what can we do?" responded simply with "show her some love." Amen, doctor.
Peter held her first. He's been a mess since Monday. He has wanted to do nothing but protect her from this and, not being able to, feels as though he has somehow failed her. He was chomping at the bit to have her in his arms again and, as much as I wanted to be the first arms that held her close, I backed away. I will have every day all day. He doesnt get that opportunity. Give him what he can. He looked so relieved once he had her close to him. I actually kangarooed her last night, which was awesome. Her warm little body flush against mine, those beautiful eyes looking up to make sure I was there before she rested her little head and slept. Oh... So sweet... She took 3cc's of her bottle for Peter but he opted to tube the rest since it was obvious that her throat hurt and she wanted to rest. Which she needed. 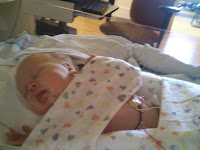 As you can see, she is very swollen from the steroids (this has gone down as of this morning and she looks like our sweetness once again!) but even with the puffiness, she is gorgeous. 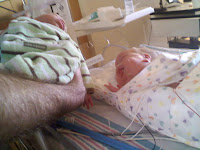 Right after the ventilator was taken away, Peter brought Bobby for a visit. Too bad they didnt hold their pose; he reached out and touched her hand. It was so sweet. 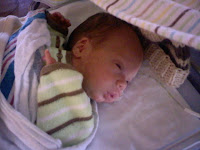 As he's been doing for days, Bobby is watching Maya from his crib.
***
This morning when we got to the hospital, our nurse informed us that Maya was being
sprung from her warming bed and going back in her crib! So we were able to get her dressed and put her back in her safe little bed! She was wide awake and so we opted to try nursing- and boy am I glad that we did. She took in 32cc's! (She is currently at 45cc's per feed.) I think she would have gone all the way, but the nurse insisted we weigh her at 20 minutes. They are allowed 30 minutes for a feeding; the nurses dont like to go beyond 20 minutes for breastfeeding in case they have to supplement with a bottle. But it sucks when the baby is really into nursing, like Maya was. I tried to put her to breast after the weighing, but she had lost interest. Bummer. But this was 32cc's WITHOUT the SNS! I used a nipple shield since Maya had the OG tube in and I was afraid she'd have a really hard time with the nipple itself, but she did a wonderful job! I'm so proud of our chunky monkey!
Bobby is doing tons better since they were put back together. He fed 74% of his feeding and is up to 5lb 13oz! Almost 6 pounds- can you believe it!!! (Maya lost weight because she was only being given IV nutrition for most of last week, but as of last night, she is just shy of 5lb at 4lb 15.6oz) If he is awake, he will nipple his full feeds- and more. He is set at a minimum of 49cc's; at one feeding, he took in 55! When awake, he is more than happy to eat, eat, eat.
***
In happy breastmilk production news, things are really doing well. I'm keeping up with their increases. Today, after breastfeeding 40 plus (I say plus because I leaked to the point that both of sides of my shirt and pants were wet), I pumped and, in 20 minutes, got 115 additional cc's. Not bad... Average pump is 90-100, and that is without the breastfeeding. I'm up to above 750 for the day, average. I'd like to increase up about 250 more cc's. I think with more pumps (or breastfeeding sessions) this is more than doable. I've been reading "Mothering Multiples", a LLLI publication that deals specifically with breastfeeding twins and it lists 750ml's a day in the "optimal" range for production. So, woo hoo. Most babies, according to literature I'm reading, only eat about 2oz per pound (so, for a six pound baby, that is 12oz or 36oml per day). Bobby is currently at approximately 400ml per day, which is well more than he needs. Once they come home and they are eating on demand, I think things will be better than being "force fed" in the NICU to gain weight.
(Oh, a sweet story... Their nurse on Thursday night took a picture of Bobby and photoshopped it to read "Get well soon, Maya. Love, Bobby" and taped it to her bed. So sweet...)
Posted by Michele at 2:37 PM

My mom was a NICU nurse and I remember hearing stories about "her" babies...I love how(most!!!) NICU nurses really get attached and love and nurture the babies in their care...and going above and beyond with signs and cute little things just shows what great hands your kids are in :) That must make you feel so much better when you have to leave them.

Glad things sound like they're going well. You're in my thoughts and prayers.

Hurray for perfect lungs and a kind doctor! :)

Oh I've been thinking of Maya so often!!! Great news,all around. :)

Big loves from our NICU to yours. :)

Go Maya go! Terrific news on the perfect lungs, so good to know that all is well there. Her poor little throat :( Yay for the steroids having worked and ESPECIALLY for the breastfeeding after extubation! That is seriously fabulous to hear as some babies can have oral aversion issues after being intubated (usually for longer periods but Maya is so very aware...) and it will only help your supply improve even more. The more breast-time you have with the babies the better for production, and it must have been so nice for her to snuggle up and take her milk in such a comforting way after what she went through. Peter is such a sweet Daddy, poor guy, I about cried when you talked about how he was about holding his little girl. Sounds like she has him wrapped right around her finger :) Yay for happy news!

I'm so happy that she is better.
Wonderful news on the breast feeding. You go girl! With two babies you will be at home nursing all day long! (at least it seems that way to me) They are so big already. Can't believe all that they have accomplished in 7 wks.
I bet they will be coming home pretty soon :) Does that worry you at all? Just wondering.

Wow, has it really been two whole months? I love that your babies are doing so very well. And I'm sorry about the rough times this week.

Absolutely wonderful news! I'm so glad that she's doing so well, and healing - and that nurse was just so sweet. Thinking of you!

yeah!!! So glad that that Maya is vent free! They are doing awesome!! Once they take all their cc's via breast or bottle can they go home?

Do you know why are they allowed only 30 minutes for feeding? And i agree, when the baby is nursing, it sucks to put a timeline on it. I dont know what the reasons are, so unless i know, it makes no sense to me. We nurse and i can also tell you, Sydney is 4.5 monhts but when she is distracted, she wont latch again neither. They must eat as much as they want/need before distracting them otherwise forget it

Great news Michelle! and such a sweet nurse!

I am so glad to hear Maya is doing much better. Thinking of you. *hugs*