And So It Begins

Well, my friends, we have officially survived the first week of preschool!!!

Tuesday came way too quickly.  Both kids seemed really excited.  On Monday night, they wore their special night-before-the-first-day-of-school PJs (which they picked out) and, after having some homemade waffles for breakfast, they were both more than happy to put on their first day (and self-picked out) clothes and shoes.  I'd packed their snack in their new lunch boxes and stuffed their backpacks with the requested items and, before I knew it, we had two preschoolers with backpacks on in our kitchen where my babies had been seconds before!

Bobby loved his backpack so much that he actually got upset when Peter explained he couldnt wear it in the car, and Maya insisted on holding hers the entire ride to school.  Peter did drop off (since they tend to do better with him leaving than with me), so I did my hugs and kisses and waved good-bye as they pulled out of the garage.  Of course, then I grabbed the camera and followed behind in Peter's car!  I had the good luck of being right behind them in line at drop off, so I got more pictures!

At open house, Miss M had explained that they prefer the kids be dropped off at the school building, since preschool has their own entrance, and that an aide or teacher would meet the children and take them into school.  I was initially nervous about this, but Peter said that it went okay.  Maya walked into school on her own, holding the aide's hand; Bobby was carried and was a bit more shaken, but wasnt crying.

When I picked the kids up, an aide brought Maya and Miss M carried Bobby.  As I loaded them in the car, she explained that Maya had a good day and, after an initial cry, was okay and got into the day.  She said that Bobby cried off and on for the morning, but did play a bit and, at centers, played for 20 minutes with the cars.  I'm assuming snack went well (since both kids love to eat).  The bad news?  He bit the aide (a few times) and pulled her hand.  Because we'd been emailing back and forth, they knew of his frustration issues, so they were prepared and I appreciate their willingness to work with him, but that doesnt take away the unacceptableness of the behavior.  I assured her that we will work on it and continue to talk to him about finding self-soothing methods that dont involve biting or hair pulling.  I also emailed her while the kids napped to follow up and let her know that I'm always open to her suggestions and thoughts, to which she replied in kind.  Have I mentioned that I love this teacher???

The rest of Tuesday went well, and on Wednesday, they spent the day with their paternal grandparents as usual.  We talked to them (especially Bobby) about biting, pulling hair, etc, and the importance of being nice to everyone, especially our teachers.  I picked up a few books (Teeth Are Not For Biting, Hands Are Not For Hitting, and Feet Are Not For Kicking).  Come Thursday, the kids were psyched for school again and easily got dressed, wanting to put their backpacks on by themselves and clammoring for the car.  Drop off went easily, although I did see Bobby cry as the aide took him from the car.  (On a positive note, I didnt see him try to pull her hair!)  Since it's only 10:30am, I'm not sure how the rest of the morning will play out, but I haven't received a phone call yet, so I'm taking that as a good sign! 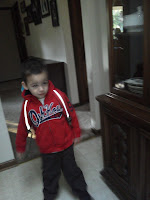 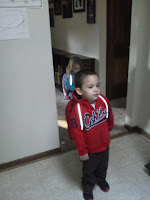 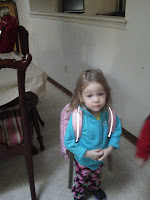 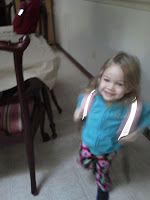 It's an adjustment, no doubt.  And not just for them.  Tuesday, I said my good-bye with a smile and managed to make it through the car swap without tears, but before I'd even gotten a few blocks away from the school, I felt them in my chest and all I wanted to do was talk to my mom.  She answered her phone and I'd barely gotten the words "My babies are at preschool" out before a sob escaped too.  My babies...  My two pounders are now two rough-and-tumble preschoolers.  The baby phase and even the toddler phase are behind us, and now we are in that early 'child' phase.  It's both a feeling of joy and a feeling of sadness for me.  I am so happy for them and so proud of all they accomplish and yet, there is a lingering sadness.  Perhaps it is because, it seems, I wont have a do-over... There wont be another 'first, first day of (pre)school'.  I, most likely, wont have three years to get used to a baby turned toddler turned little person who struggles into their backpack and shoes (but MUST DO IT THEIRSELF) and waves goodbye as Peter takes them for that big first day.  It's possible, of course, but a decade of infertility (and especially this last year of getting it on without worry of incompetent cervixes and preterm labor and CDs on the calendar) have me pretty well squared away in life as a mother of two living children.  I tell myself that it's okay because it is.  I tell myself that every stage is a learning place for all of us (because it is).  I tell myself that the only constant in life is change because that is all that I know to be true.

But it's still pretty freaking hard.  And I still want to cry when I think about it.

I read Mel's post about taking her twins back to school on Monday and it was like hearing an "I'm not the only one" in my subconscious.  And, talking to my own mother on Tuesday helped a lot.  As I sobbed about feeling like a wierdo because I was the only one crying like a baby, she laughed and said, "Honey, don't think they arent crying.  Just like you, the other moms were strong for their kids when they dropped them off, and now?  Now, they're on the phone with their own mothers, asking 'was it like this for you? what's wrong with me?'.  And yes, it was like this for all of us too, and there's nothing wrong with you.  You're a mom who loves her babies. They'll always be your babies."  And she's right.  Like my mother before me (and hers before hers...), I cooked (homemade marinara) and froze, cleaned house, and did (all) the laundry.  I stripped beds (and, okay, maybe I snuggled their bears before I tossed them in the wash... No comment) and made them anew.  I opened all the windows and let the sunshine and fresh, soon-to-be-fall air in.  And then I left early to get to the pick-up line... Where I proceeded to be 15th in line because every mom wanted to get there before dismissal... :)  Guess I really wasnt the only one.

Today, there weren't any tears (at least, from me!).  I went to the market, prepped corn for the freezer, and currently, the smell of homemade chili (which I'm about to freeze) is wafting through the house on the breeze from the, once again, open windows.  I'm about to mop my kitchen and wonder (again) what the kids are doing.  And then, I'm going to have a cup of tea and pick up editing on a piece that has been dormant for a while as we've prepped for back to school.  And, although I'll leave earlier than I need to, I'll be fine sitting in the car, knowing that the kids (most likely!) had another good day.

One day, this will become the new normal.  And that's okay.  It has to be.  (Right before it changes again...)

Updated at 1:30pm: So, I picked the kids up.  I think I may have heard Bobby crying, but I'm not sure :(.  An aide brought Maya to the car and Miss M, once again, carried Bobby out.  He wasnt crying then, so maybe I was wrong.  She said that today was better than Tuesday; he didnt bite (thank God!) but he did still pull hair (UGH!!!!).  She also said that he asked to go for a walk and, because he was so upset and crying, one of the aides walked him up and down the hallway outside the classroom.  She asked if I could meet on Monday, so I can soon check "first teacher requested conference" off my list...  So, I'm sitting down with her Monday afternoon to talk.  I'm nervous already... :(  And, as I was checking their folders, a cute little picture that Maya colored was there, but there wasn't one for Bobby.  He loves to draw and color; was he too upset?  Outside walking during that time?  Destroyed it because he was pissed off?  I dont know.  Kind of makes me sad.

He nearly fell asleep in my arms at the school while I was talking to Miss M but, when I turned to put him in the car, he turned back to her and said "Bye bye.  See you later," with a smile and, when she asked for a high five and put her hand up, he gave her one.  So, I dont know.  He was dozing in the car (it's 2 miles from school to home, door to door) and we ate lunch as soon as we got in the door.  They were asleep before their heads hit the pillows.  He did have a nightmare and woke up at 5am (and didnt go back to sleep), so I want to write off part of it to being tired, but I know that's not the entire thing.  So, we'll see what Monday has in store!  Fingers crossed, still praying that he'll adjust soon.  One of the moms from cross country told me that it took 2 weeks for her little one to stop crying when she started preschool; she's now in kindergarten and loves every day of going to school, so there's hope!
Posted by Michele at 10:44 AM

I would cry my eyes out! I couldn't even consider preschool yet, so I'll have to up the playdates to make up for the lost socialization.