Today is August 1st... the observation of First Harvest... the feast of bread (hence the latin name Lammas or Mass of Bread)... the first of several harvests of corn and barley and wheat.

For years, Peter and I hosted First Harvest gatherings, usually on weekend closest to August 1st, where we'd host a Tailteaan faire (think less Olympics and more a bartering of wares and services) in the afternoon as we made different seasonal foods an then have a bonfire and the participants would tell the creation stories and legends of First Peoples while breaking bread together.  Here's one from my mother's tribe for your virtual bonfire. (as a fun note, these grew in our backyard)

The Legend of the Cherokee Rose
In the latter half of 1838, Cherokee People who had not voluntarily moved west earlier were forced to leave their homes in the East. The trail to the West was long and treacherous and many were dying
along the way. The People's hearts were heavy with sadness and their tears mingled with the dust of the trail. The Elders knew that the survival of the children depended upon the strength of the women. One evening around the campfire, the Elders called upon Heaven Dweller, ga lv la di e hi. They told Him of the People's suffering and tears. They were afraid the children would not survive to rebuild the Cherokee Nation. Gal v la di e hi spoke to them, "To let you know how much I care, I will give you a sign. In the morning, tell the women to look back along the trail. Where their tears have fallen, I will cause to grow a plant that will have seven leaves for the seven clans of the Cherokee. Amidst the plant will be a delicate white rose with five petals. In the center of the blossom will be a pile of gold to remind the Cherokee of the white man's greed for the gold found on the Cherokee homeland. This plant will be sturdy and strong with stickers on all the stems. It will defy anything which tries to destroy it." The next morning the Elders told the women to look back down the trail. A plant was growing fast and covering the trail where they had walked. As the women watched, blossoms formed and slowly opened. They forgot their sadness. Like the plant the women began to feel strong and beautiful. As the plant protected its blossoms, they knew they would have the courage and determination to protect their children who would begin a new Nation in the West.

As we shared these stories, we would pass around the fruits of our afternoon labors: cornbread, bean stews, breads covered with the fresh jams we'd cooked that day. We'd finish off by making cornhusk dolls (from the freshly husked corn) and meditating on a trait we hoped to change (or at least start changing) by our third harvest celebration. By the end of the night, laying on blankets and gazing into the stars, you werent sure if you were a Lugh worshipper welcoming the halfway point of summer and fall or a First Person remembering when your world was simpler... It didnt matter. We were one. All one. All sharing in the changes of the earth and in ourselves.

We're busy these days. We havent hosted a faire in years (I think 2007 was our last one, honestly), and while I still bake a fresh loaf of bread and make jam on Lughnassadh, the kids have been too young for me to have time to do much else.

Not this year. This year, we are celebrating together. I dont know that we'll whip out a bonfire, but this morning, the kids and I made the rounds at local farms. We bought the food and began our traditions anew and yet renewed. Instead of making bread, the local orchard store had a freshly baked cinnamon raisin loaf- perfect for today's lunch and tomorrow's french toast- which we picked up with some of their fruit, the blueberries of which we made into fresh jam; the peaches are ready to be gobbled up in cobbler. Then, it was off to one of our two farm stops, where we got corn and a tomato and fresh bacon, followed by the second farm for eggs and milk. At home, we got the berries started on the stove for jam, husked our corn and made sure to save the husks!, and started our dinner sides of black beans with bacon (which are cooking now and smell HEAVENLY) and slow cooked (but not 'fried') corn (made with some of the bacon drippings),which we'll serve together with slices of that fresh tomato on top. I'll fry pork chops (which we already had from the farm) and make cornbread. Maybe, even without the bonfire, we'll share legends over dinner... who knows.

Later, we'll make our cornhusk dolls. Simple, hemp cord tied effigies that represent who we are and who, by the end of harvesttide, we hope to be.

Together, as a family.

It's strange to be here and yet, so right. So perfect indeed.

Happy First Harvest. May your cupboards, like your hearts, be full, and may you give that fullness to all those you encounter. 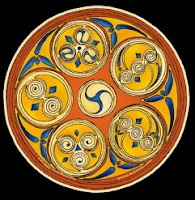 How wonderful! I had no idea about such traditions. It sounds like a fantastic thing to participate in.

I never knew of such traditions, but my mouth is watering at your descriptions of all the fresh food you're preparing! Enjoy!